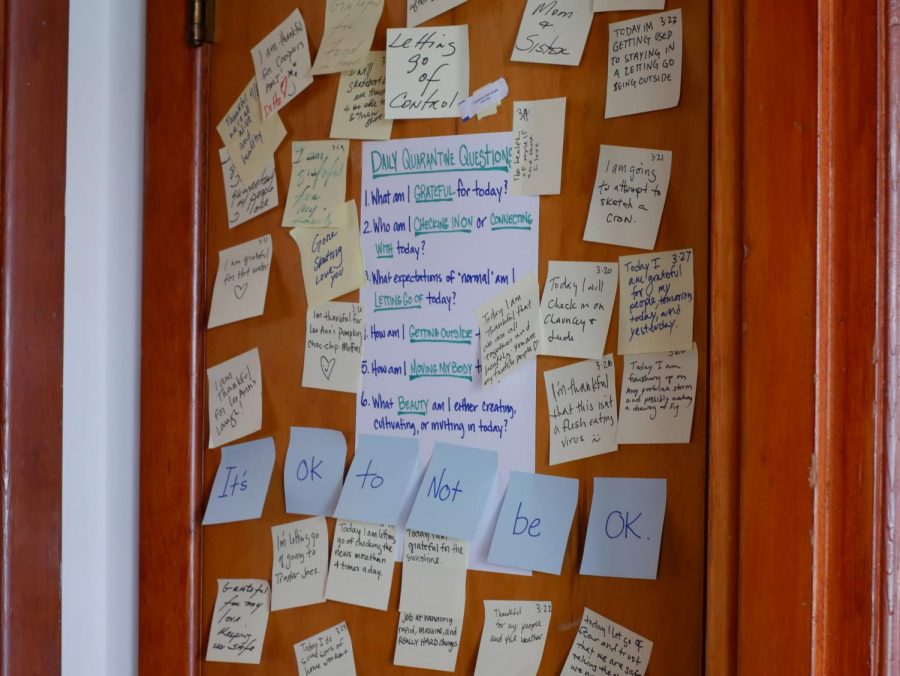 Post-it Notes cover the door with answers to the “quarantine questions” posted. The list of questions is to serve as a reminder of the positive aspects of life during quarantine. Along the bottom is a reminder that not all answers need to be positive and that it is okay to not be okay.

As classes at Oregon State University remain remote until further notice, some students are feeling the mental, physical and social effects of full-time online learning.

“It can be hard to do everything online when you are not an Ecampus student or have never experienced taking an online class before,” said third-year Ph.D student Julia Drizin.

Drizin said she has experienced difficulties in remaining focused on her schoolwork and feels she is not performing at the same level as she once was when taking in-person classes.

“I have slowed down a lot, but I see that the school is accommodating to its students this term and professors don’t expect people to go at the same pace as before,” Drizin said.

However, according to fourth-year climate science major Sierra Hosea, there are some students who are adjusting much more smoothly to such changes.

“The transfer to remote classes wasn’t an enormous transition, however, my plan was to go to the computer lab on campus to work but now I have to do everything on my laptop which is a lot slower and takes me twice as long to finish my work with,” Hosea said.

Hosea said she believes herself to be very lucky considering she planned on only taking two classes this term, both online.

“Because of my major, I’m used to doing everything on my computer and spending hours on my own doing homework,” said second-year mechanical engineering student Lissette Wilhelm. “I don’t think switching to online has made much of a difference for me.”

According to Wilhelm, even though she is familiar with remote learning, she is still having a hard time adjusting to the new norm.

“It has been taxing on my sleep schedule because I have pretty much lost all track of time,” Wilhelm said.

Wilhelm said she feels the strain of practicing social distancing and feels it’s affecting her physical health because she is exercising much less.

“When living in the dorms, I would run on an OSU track, but now that I’m living currently with my parents, I haven’t been out much and am definitely not getting as many steps in,” Wilhelm said.

Wilhelm is not the only one to feel overwhelmed by the new required social distancing.

Drizin said the core of her issues is more in regard to the lack of social contact that she has experienced, or not experienced, in the past month.

“It’s hard even talking and articulating my thoughts now that I spend most of my time alone,” Drizin said.

According to Drizin, she struggles with not being able to converse in the way that she used to with professors and other classmates because many of her classes are not designed to be remote.

“It’s hard being one of those students whose classes are not originally designed to be online. One of the hardest things is trying to have an effective discussion remotely because many of the classes I take require group discussions,” Drizin said.

Hosea also said she is also struggling to get used to little human contact.

“It is strange not being around people,” Hosea said. “I really miss the camaraderie that is attached to the college experience.”

Some may be having a harder time adjusting than others due to the unprecedented nature of the pandemic, according to Drizin.

Drizin, who has experienced mental health issues in the past feels fortunate that she seems to be handling the situation better than she expected, yet still feels the effect of isolation.

“I was already dealing with depression and now the isolation is causing me to feel very overwhelmed,” Drizin said, adding that she is aware that many are also dealing with the strain of isolation and things may be a lot harder for those with a history of mental illness.

However, according to Assistant Director of Mental Health Promotion Bonnie Hemrick, there has been a decrease in students seeking counseling since OSU transitioned to remote learning.

“There have not been as many students seeking our services as we would typically see this time of year. We are currently trying to determine the reason behind this so that we can try to address any concerns that students may have,” Hemrick said via email.

Because there has been a decline in student activity at Counseling and Psychological Services, Hemrick said she wants students and faculty to be aware that counseling services are still proceeding remotely as recommended by the university.

“Services are currently being provided through secure Zoom video conferencing,” Hemrick said. “We are currently developing a workshop facilitated by CAPS student outreach assistants, which can be delivered via Zoom as well.”

According to Drizin, the transition from in-person to remote counseling sessions can take its toll on those who are already struggling.

“I can imagine how hard it must be for those struggling with mental health because everything that has occurred was so sudden and unprecedented,” Drizin said. “I finally got into a CAPS group, and it’s been very helpful for me even though it’s all remote. It helps remind me that my reactions and how I’m dealing with all of this are actually completely normal.”

Drizin said the one thing that has kept her in a positive mindset is seeing how people are continuing their efforts to remain optimistic and considerate of those around them.