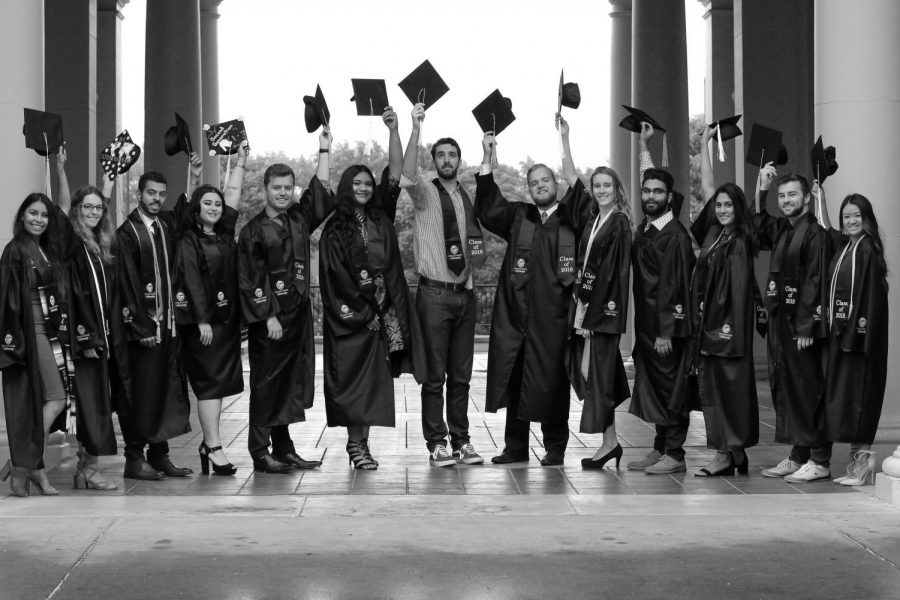 2018 Graduating students associated with DamDiverse pose under the Weatherford Hall arch for a photo.

Oregon State University’s 2020 graduating seniors have voted to reschedule the spring commencement ceremonies to fall 2020 for both the Corvallis and Bend, Ore. campuses.

Moving forward there are a few options being discussed. A survey earlier conducted with over 2,500 senior participants gave the university an idea of how to deal with the cancellation. Out of these students, 66% voted to reschedule commencement, 25% voted for a virtual ceremony and 10% voted to cancel it altogether. As of now, the university plans to reschedule both commencement ceremonies for a later date.

This all-student email was a response to Governor Kate Brown’s recent extension of social distancing that will now continue through June 12. In Ray’s email, he said he made this decision with a heavy heart, stating commencement is “a tradition that was begun 150 years ago with three students and now celebrates the distinguished achievements of more than 7,000 graduates annually and is attended by more than 25,000 guests”.

“So at this point, I wasn’t super surprised that they canceled ours since they had canceled all of my friends from my hometown and their college graduations. My first thought was wondering if they/when they reschedule, will the same number of people come?” Morehead said. “A lot of my friends live in Oregon, so it’s pretty easy for them to come back for a weekend. But still, we’ll all hopefully have jobs and internships and it might be hard to travel.”

Morehead was one of the participants who voted in the survey to reschedule the ceremony. Though she and her family understand why they had booked a hotel nine months in advance in anticipation. She said she worries it will be difficult to find a place to stay on such short notice, coming from California.

“I think the university has done everything to the best of their ability. I don’t really know what options they have to help us, I think the thing that everyone is talking about the most is the cost of tuition for the term needing to change,” Morehead said. “Overall, I am super upset about this entire situation, but it feels really hard to complain when there are people risking their lives in the medical field and essential workers out there helping people every second this pandemic is happening.”

John Valva is the executive director of OSU’s Alumni Association. In light of recent events, OSUAA is doing everything they can to celebrate the seniors.

“This is among our highest priorities right now. Our hearts are with every OSU student who has had to adjust lifestyles, plans, studies and budgets at a moment when all of us are also concerned about the health and safety of our loved ones,” Valva said. “we are fully ready to step up in this effort with program support and targeted messaging for the class of 2020 and the alumni community.”

“For the first time in decades, we will offer the entire class of 2020 a free Alumni Association membership. Along with the Career Development Center and many of the academic colleges and units, we are hosting virtual alumni panels and webinars on life skills, career prep and particular techniques needed in this moment,” Valva said. “As a special recognition, this class’s perseverance will be recognized among our over 200,000-person-strong network.”

OSUAA supports the cancellation and rescheduling of the ceremony to keep students and their families safe. Alumni offer support to students year-round and are always looking for new ways to connect with students including offering a vibrant network of individuals in professional careers who are eager to help students navigate through making big decisions, according to Valva.

“Let’s remember this: every single graduate of Oregon State University was a student here. They lived in the same residence halls, sat in your lecture rooms, walked and lunched in the same quads,” Valva said. “The bonds shared by Beavers are permanent and meaningful—and they mean it when they want to help.”

Rebecca Mathern is an Associate Provost and part of the University Registrar. Since the University has never canceled a commencement in its history, she is glad OSU is able to reschedule.

“As you can imagine, this was a difficult decision to make but we believe it is the right decision and is strongly supported by students given their support for postponing commencement to a later date,” Mathern said. “Of course, it is consistent with the governor’s executive orders and OSU’s measures to help reduce the risk and spread of COVID-19.

Mathern is heavily involved in the planning phase of the event working closely with the commencement director. The Office of the Registrar is also in charge of preparing all the diplomas. OSU is doing everything it can to support its seniors including reviewing each record to ensure that all students set to graduate this spring will be able to, Mathern confirmed.

“We look forward to the time when we celebrate our [more than] 7,000 graduates for this year,” Mathern said. “Commencement is personally one of my favorite days of the year at work. It is a lot of work but so rewarding to see every graduate smiling when they receive their diploma.”