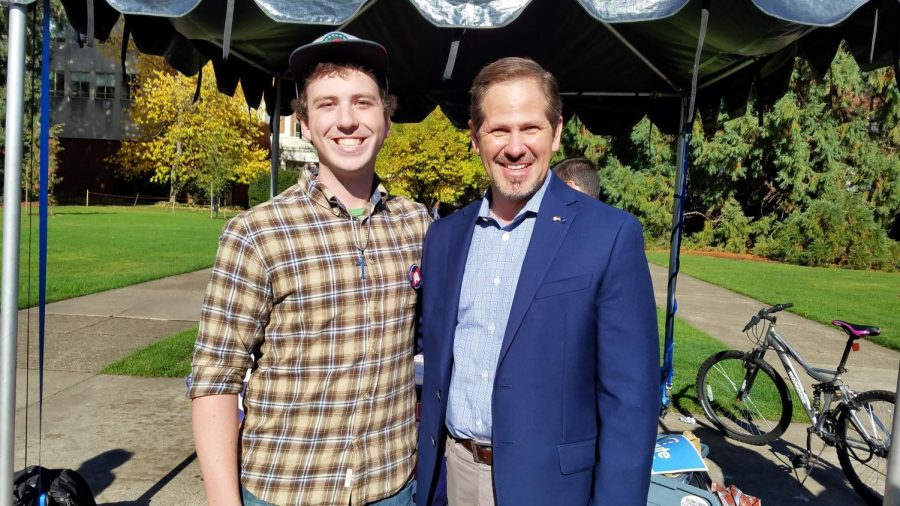 In today’s political climate, Oregon State University students express they often feel unheard and polarized and believe as a community we are much stronger in numbers, despite opposing views.

According to the President of College Democrats and fourth-year political science major Ayla Bussel, it has become increasingly difficult to engage with those that hold opposing opinions.

“The issue today is that under the current administration, the political climate in the U.S. has become increasingly volatile,” Bussel said.

“Most Republican values are fundamentally oppositional to my values. I am pro-choice. I am a strong supporter of labor unions and workers’ rights. I believe in sensible gun control laws and government regulations,” Bussel said.

As for another Democratic standpoint, Vice President of College Democrats, Karl Emmrich—who describes himself as a progressive—said he conforms to certain values including quality education, raising the minimum wage and international peace.

However, Emmrich said not all student Democrats feel isolated from their Republican counterparts, as expressed by Bussel.

“I definitely do my best to converse with the other side and I tend to feel comfortable when I do,” Emmrich said. “I always want to talk with them because I would like to change their minds.”

However, some students with opposing views often feel uncomfortable voicing their opinions on campus, as one member of the College of Republicans explains.

According to Richard Epperley, a third-year political science major, “it seems there is not a lot of desire to include conservatives in debates. They’re not asking our opinion as much as they think.”

Epperley, who describes himself as a traditionalist, believes conversation between individuals with opposing political views are lacking because many want to stereotype certain parties.

“You can’t put one single opinion on a group as a whole because each individual is different,” Epperley said.

In times of political turmoil, such as the impeachment trial, voicing a conservative opinion is uncommon on OSU’s campuses, according to Epperley, and in such instances, he said he often feels unable to voice his views.

“Being conservative on a mostly liberal campus can be pretty lonely at times,” Epperley said. “It seems that OSU is pretty much an echo-chamber, there are not a lot of opinions coming from both sides.”

Second-year electrical and computer engineering student, Benjamin Bailey, president of the College Republicans, said even though he feels OSU students can be open to varying opinions, some students are less forgiving.

“They have the best intentions in mind, but they only think of the easy answers,” Bailey said.

Bailey said he often feels isolated when in a classroom setting.

“Classes are one of the hardest places to be a conservative,” Bailey said.

Bussel described the opposite experience however and said she often feels comfortable speaking up in class.

“I don’t find it difficult to speak on my values openly in classes, because I find OSU to be a relatively accepting and tolerant campus,” Bussel said.

Bussel said she acknowledges conservative struggles on campus, and she said she notices many who hold conservative values feel inclined to remain silent in such classes.

“I am unsure of the political demographics of my classes,” Bussel said. “I have been trying to encourage students who don’t normally speak up to do so more often.”

However, even under such circumstances, the one thing both parties could agree on is the importance of community. Bussel, Emmrich, Epperley and Bailey all expressed a desire for students to come together to create a safe and welcoming university where learning and growing as people and intellectuals comes before anything else.

“In the past, the College Democrats and the College Republicans at OSU did not communicate very much, but now we are joining together more to start conversations and I hope to see more collaborations in the future,” Bussel said.