CAPS’ shortage of services due to funding, high demand, OSU makes “effort to find an answer” 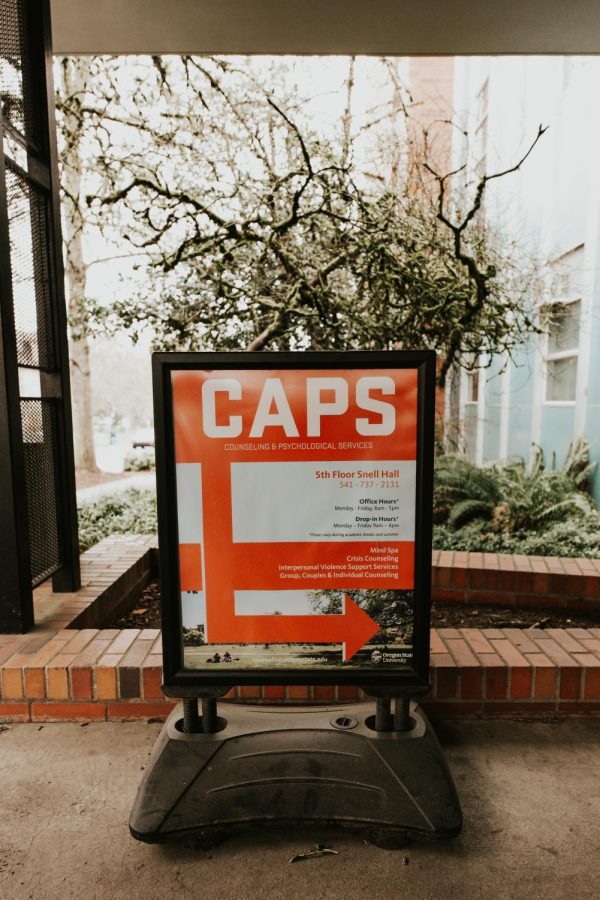 This photo was taken on March 14, 2020. Counseling and Psychological Services provides mental health counseling to students, and consultation, outreach and education to all OSU community members. CAPS is located on the fifth floor of Snell Hall, though all CAPS services are currently being offered remotely due to the COVID-19 pandemic.

As the ongoing issue of mental illness remains prevalent throughout college campuses and mental health officials at Oregon State university begin to offer online suicidal prevention services, though some students feel more needs to be done.

According to Counseling and Psychological Services’ Mental Health Promotion and Suicide Prevention coordinator, Tessie Webster-Henry, there is comfort through conversation, which may have the power of preventing someone with suicidal ideas from acting on such thoughts.

“Because people just need to be heard sometimes, I think any conversation about mental health can be useful,” Webster-Henry said.

Considering suicide is the number two cause of death amongst college students, according to activeminds.org—Webster-Henry said student interactions are important after recognizing warning signs of suicidal tendencies such as isolation or loss of academic interest.

Due to the COVID-19 pandemic, tools like Facetime, Zoom, or a simple phone call can allow people to interact while observing social-distancing protocol, as well as Governor Kate Brown’s Stay Home, Save Lives Executive Order 20-12.

Webster-Henry attributes CAPS resources, such as Kognito—which helps OSU students develop the appropriate skills to discuss mental health issues with those in distress—to be of great use to students who are looking to support their fellow classmates. Kognito is an online training simulation that uses avatars and two different learning modules to teach students, faculty and staff mental health and suicide prevention, and how to identify at-risk behaviors, according to the Counseling and Psychological Services Facebook page. More information regarding Kognito at-risk training, as well as Kognito registration can be found here.

According to Active Minds, friends of students who may be struggling with suicidal thoughts can be extremely useful in preventing such situations from escalating, considering 67% of students confess feelings of suicide to friends before telling anyone else.

Because of this reason, it’s important that OSU officials help students develop the language to discuss mental health with those who have expressed a certain level of anguish, Webster-Henry said.

However, even though some students—such as fourth-year climate science major Sierra Hosea—have expressed appreciation for the Kognito resource, there are still concerns regarding the lack of clinical services available for those struggling with mental health and suicidal depression.

“I definitely think it’s great to be there for your friends, but it should not be students’ first line of defense,” Hosea said.

According to Hosea, when experiencing personal struggles during her first year at OSU, she went to CAPS only to be turned away based on the apparently low severity of her issues.

“They said that any quick availability was only for students who were at risk of harming themselves,” Hosea said. “I understand that severe cases are important, but my struggles were real too and it seemed as if they thought it wasn’t a priority.”

According to Bonnie Hemrick—who has worked at CAPS for over five years and currently serves as assistant director of mental health promotion—many people are unaware of certain policies encouraging students to return to CAPS if they feel their symptoms escalating.

“If students feel their symptoms are getting significantly worse, they can come back and be assessed again and if there is a mental health emergency, it will always be immediately prioritized,” Hemrick said.

However, Hosea said she is still disappointed with CAPS’ approach towards her wellbeing and said it was hard as a new student to be told that such services are available, only to be rejected.

“Since we are already paying for these services, it would be nice if we could have them ready for us when needed,” Hosea said.

Hosea is not the only one to be inadvertently declined by CAPS, according to Julia Drizin—a third-year Ph.D student who first approached CAPS in the fall of 2017.

“I had just moved and it was a hard transition. I contacted CAPS in September but they didn’t get back to me until December during the break. By that time I was out of state and could not come in for an appointment,” Drizin said.

However, this would not be the last time Drizin had a run-in with the organization, she said.

“I had a hard past summer and went in to speak with someone at CAPS. They said someone would be in contact by September but I didn’t hear anything until December. I then asked about meeting with a counseling group, but never heard anything back,” Drizin said.

Like Hosea, Drizin questions why she pays a fee each term to fund CAPS, only to be rejected twice by their services.

According to Drizin, there seems to be a flaw in the system regarding funding and how much money is being used to effectively help students.

Safi Ahmad, Student Fee Committee chair, explained via email that as of 2020, each student is required to contribute $52.77 during the fall, winter and spring terms, and $45.50 during the summer term to fund CAPS resources.

Hosea, who also agrees that such funding appears to be insufficient when providing students with constant care, said she doesn’t blame CAPS in particular.

“I honestly think it’s less on CAPS and more on the university’s ability to provide more funding,” Hosea said.

According to CAPS Director and Licensed Psychologist Ian Kellems, Ph.D, the total funding for the current fiscal year is approximately $3,820,957.37.

Yet, as Hemrick said there is still a shortage of availability for services when a sudden influx of students are in need of guidance.

“We know we can’t always provide counseling services to everyone right away,” Hemrick said.

However, the lack of funding is not a rare occurrence specific to OSU, according to Hemrick.

“This is a nationwide issue. It’s rare to find a college that can always keep up with demand,” Hemrick said.

Hemrick said she and her colleagues appreciate the hard work which OSU is contributing to solving such issues.

“I have really seen a shift in help and am happy with OSU’s effort to find an answer,” Hemrick said. “I really appreciate the level of support which we are currently receiving to resolve this issue and see a bright future ahead.”

According to Kellems, the understaffing issue at CAPS is slowly but surely being resolved thanks to OSU officials taking the initiative towards student health.

Kellems said CAPS’ funding for the next fiscal year will offer room for four additional CAPS therapists, without any anticipation of increased student enrollment.

“We [at CAPS] take this funding allocation to be a very strong statement from President Ray and OSU that their messaging about supporting students’ mental health is not only words but also backed with deep concern and significant financial support,” Kellems said.

Counseling and Psychological Services is delivering all services remotely while practicing social distancing during the COVID-19 pandemic. Information about currently-offered services can be found on the CAPS website.