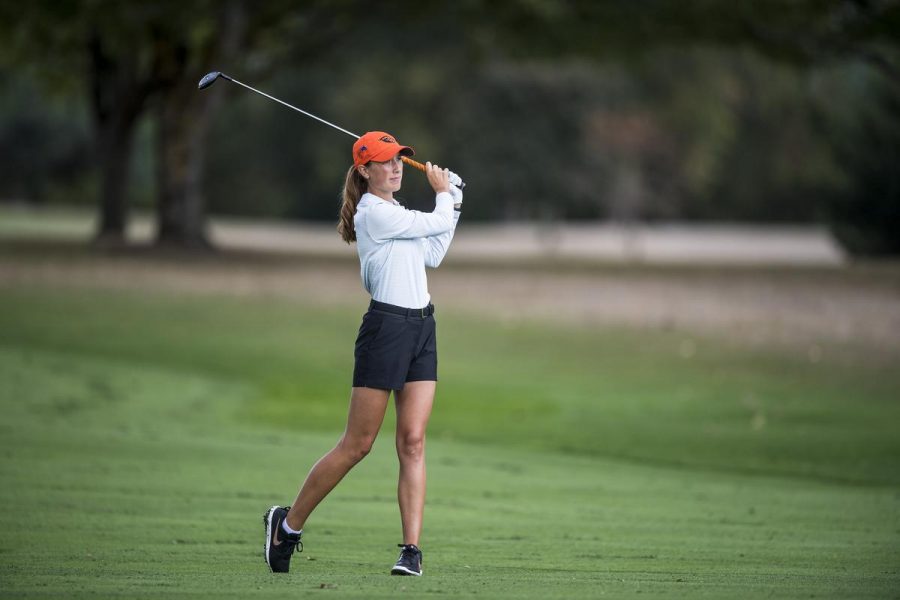 OSU junior golfer Ellie Slama follows through on a shot. Slama qualified for her second year in a row for the Augusta National tournament, which was later postponed for the 2019-20 season due to coronavirus.

The tournament is meant for the best of the best golfers, with only the elite being able to say that they were able to compete in the same tournament as Tiger Woods. Qualifying for this tournament is no joke.

Slama can add her Augusta National qualifications to her already long and impressive list of accomplishments. Not only did Slama win the OSAA 6A Girls Golf State Championships in 2016 and 2017, but she has also medaled at the 2015, 2016 and 2017 Oregon Junior Amateur, and was the top American finisher with seventh place at the 2016 IMG Junior Worlds. All of these accomplishments were while Slama was still in high school, way before she would even compete for Oregon State.

Slama was one of only 72 of the best golfers from around the world to be invited to the inaugural Augusta National Women’s Amateur, where she tied for 52nd place. Slama barely missed the cut to qualify for the last round of the tournament, as only the top 30 moved onto the final round. In the 2019-2020 season, Slama simply picked up where she left off, earning a scoring average of 72.72 in 18 rounds, the second best in Oregon State single-season history.

Slama was even given another chance at redemption, as she was invited once again to compete in the Augusta National Women’s Amateur during the 2019-2020 season. Unfortunately, like many other sporting events, the tournament was postponed due to the coronavirus pandemic.

Despite this, Slama is still staying positive about the whole situation. In an interview with The Oregonian, Slama said, “Knowing that it’s backed up by other competitions is good because there’s a better chance that it is postponed and not completely cancelled.”