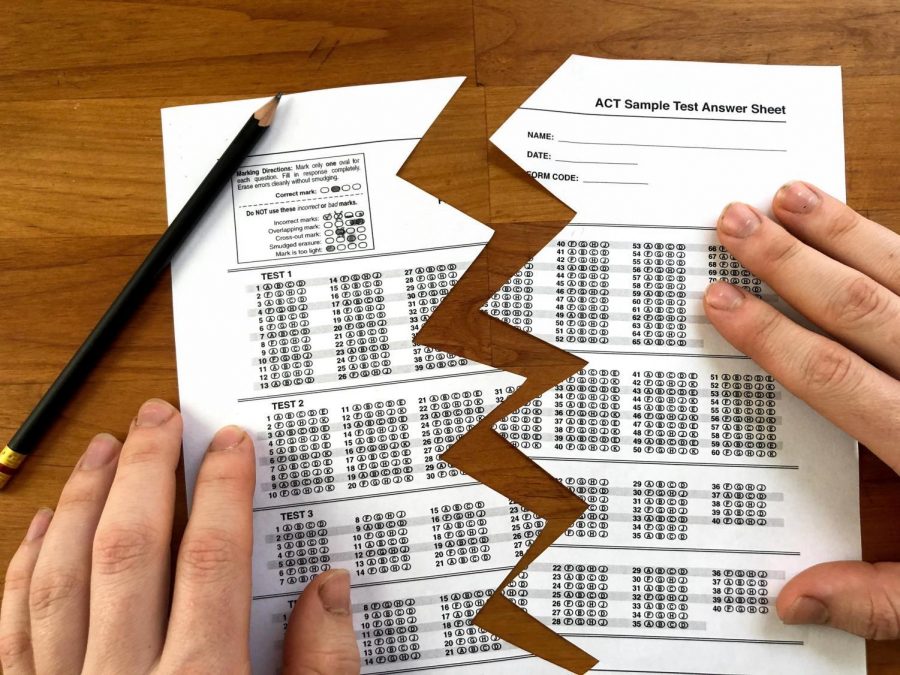 Pictured is a photo illustration of a practice ACT test that is ripped down the center. President Ed Ray released a statement on March 25, notifying Oregon State University students that standardized testing scores—the ACT or SAT— would no longer be required for admission, allowing for a “test-flexible” approach.

This decision was made by the university leaders, Board of Trustees, student leaders, alumni and the Faculty Senate, which voted in favor of the change 70-1. The meeting also allowed for the consideration of this decision affecting research literature and OSU’s land grant mission and demographics.

“Some students perform very well in high school and will do so in college as well, but they may perform less well on standardized tests,” said Ed Feser, provost and executive vice president. “The change means that students are able to make their best case for admission to OSU, citing all of their strengths and accomplishments.”

Feser notes that it comes down to a student’s choice to notify the school of their test scores, and these scores will be taken into consideration when determining acceptance.

Administration is also beginning to consider going “test-blind” after a subsequent motion made at the meeting. This would mean that OSU would not accept testing scores at all, despite whether a student opts to submit theirs.

“The University of California system has gone test optional for 2021, so it may not have much effect at all on [admission rates, and] regardless, we didn’t do this to increase enrollment or decrease selectivity; this was done as a part of a mission of Inclusive Excellence,” said Vice Provost Jon Boeckenstedt, in an email statement.

OSU is now among over 400 universities that are test-flexible, and the eighth Oregon school to adapt this admission consideration. University of Oregon and Portland State University both made the transfer with OSU’s decision last month.

“We anticipate very little overall change in our admissions as a result of allowing students this option, as OSU already was not relying on standardized test results as heavily as many schools,” Feser said. “We hope to see that more students, who were stymied by standardized testing, including those from traditionally underrepresented groups and first generation families, apply to OSU.”

The SAT and ACT are both approximately $50, not including the essay portion, making the testing not readily accessible to high school students with low socio-economic status.

“I took both the ACT and SAT, I took the SAT twice and the ACT once,” said Alex McIntire, a first-year marine biology major at OSU. “There was a time where it certainly put me back financially as I paid [for them] myself.”

Along with merely paying for the test, a lot of students who have the resources will also pay for preparation classes with study organizations, creating an unlevel playing field.

This note of accessibility for testing creates the push that most universities are crediting for test-flexible admissions.

“We do hope our decision makes it just a little easier—and especially less costly, confusing and stressful—for students to prepare their applications for admission to OSU,” Feser said. “Allowing students the option to provide test results removes a barrier that was serving little practical value. That is a very good thing.”