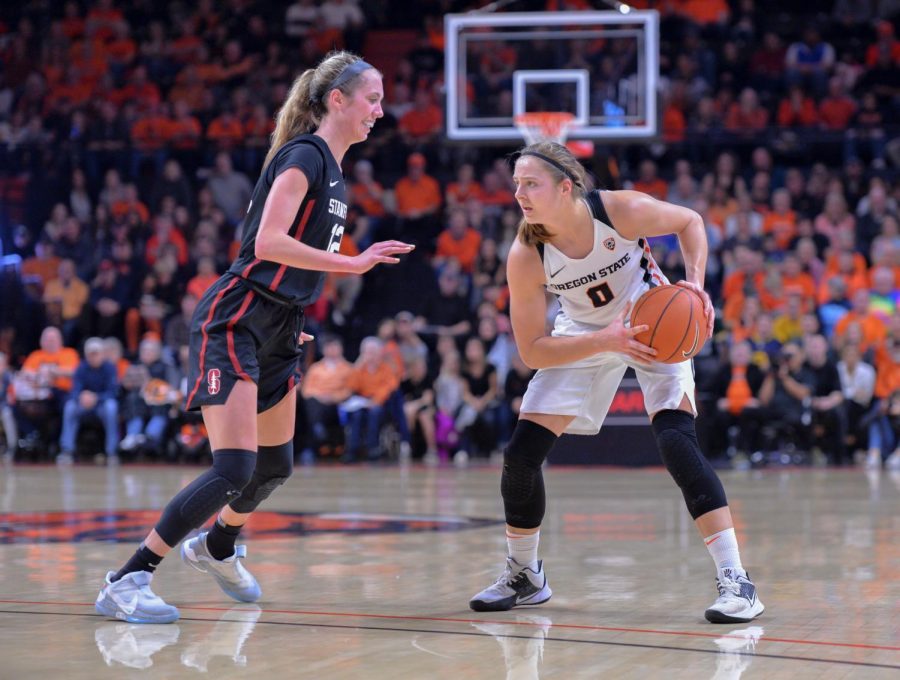 OSU senior guard Mikayla Pivec (#0) looks to find a teammate while running a play against Stanford sophomore guard Lexie Hull (#12) at Gill Coliseum on Jan. 19. The Beavers fell against Stanford during both regular season matchups and during their face off in the PAC-12 Tournament quarterfinals.

After a convincing victory over Washington State 24 hours earlier, Oregon State took on a rested No. 3 Stanford team who had beaten them in both matchups during the regular season in the second round of the PAC-12 tournament. Down by as much as 20 points, the Beavers could not find their groove until the fourth quarter and lost by a score of 57-68.

Oregon State could not handle the height and post presence of Stanford. The Beavers allowed numerous offensive rebounds which created easy second chance opportunities. While OSU freshman forward Taylor Jones has become a better player every week, the defense and rebounding has not been the same since freshman forward Kennedy Brown tore her ACL almost a month ago.

The loss raises the question of how far can the Beavers advance without much needed post defense and height. The loss to Stanford displayed how vulnerable Oregon State is down low if Jones gets into foul trouble, and other teams will try to take advantage of this.

Despite these shortcomings, the Beavers believe they have the tools to make a deep NCAA run. When Oregon State is playing at their best, they are a dominating team that is able to play lock-down defense and score from anywhere on the court.

Not everything is easy going, as Oregon State has now lost two straight quarterfinals games in the PAC-12 tournament. OSU senior guard Mikayla Pivec was visibly upset after this heartbreaking loss. While she was put in the spotlight, she echoed the same emotions the rest of the team felt.

“Just sad that we lost. The individual stuff doesn’t really mean as much to me, just sad that our team doesn’t get to play more in this tournament,” Pivec said.

The ‘individual stuff’ she mentioned, was the fact that she has become Oregon State’s all-time leading rebounder. But this is not on Pivec’s mind as she is only focused on the team and how she can help lead them to a deep tournament run.

Stanford’s stringent defense gave the Beavers a glimpse of what will come in The Big Dance. Even though Oregon State did not look prepared at the beginning, junior guard Destiny Slocum believes the Beavers have what it takes to handle the ball pressure down the stretch.

“I don’t think they really did a ton to disrupt us, we have to come off a little bit more confident,” said Slocum.

Confidence will be crucial for the NCAA tournament but this loss will not help their tournament seeding. The Beavers are still on the table to host the first two rounds but the odds have dropped.

A grueling PAC-12 conference featuring six of the top 25 teams has prepared Oregon State for war. The regular season has battle-tested the Beavers and they are prepared to go toe-to-toe with anyone that draws their card. Rueck knows what this team is capable of, and is ready for the next game.

“We’re playing our best,” Rueck said. “We’re more prepared than ever. And the conference has done that for us.”