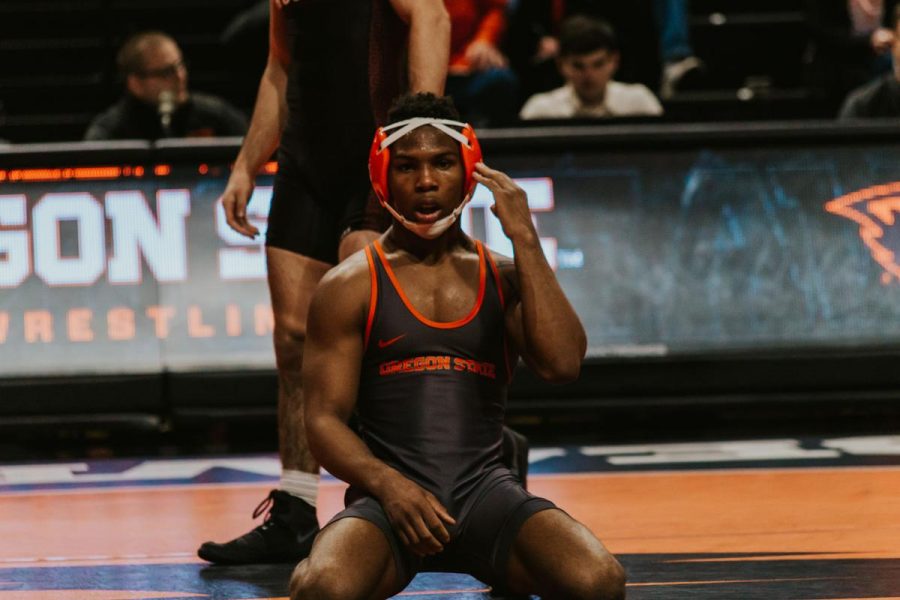 Devan Turner, in the 133 lb. weight class, competes against UALR on Saturday at Gill Coliseum on Feb. 15.

The Oregon State Wrestling team had three finalists in the 2020 PAC-12 wrestling championships in redshirt junior Devan Turner at 133 lbs., redshirt sophomore Grant Willits at 141 lbs. and redshirt junior Colt Doyle at 184 lbs. All three wrestlers knew that a win in the finals would qualify them for the national tournament.

Turner had one thing on his mind entering the tournament: winning it. Last year, Turner finished third in the 133 lb. weight class, and despite still qualifying for the national tournament, he still left the Wells Fargo Arena with a sour taste in his mouth.

In the finals match, Turner faced off against junior Paul Bianchi of University of Little Rock, Arkansas, who Turner defeated in their last meeting by a score of 8-6. Turner was now able to defeat Bianchi by a score of 5-3, and walked away with the PAC-12 title. Turner was the sole champion for Oregon State who qualified for the national tournament for the second year in a row.

Willits won the PAC-12 championship last year at the 141 lb weight class, pinning Brandon Kier of Stanford in the second period. Like Turner, Willits qualified for the national tournament as well. Looking to defend his title at this year’s Pac-12 championships, Willits had to face off against Stanford redshirt freshman Real Woods, who Willits lost to in their last meeting by a score of 9-1.

Despite a hard-fought effort from Willits, he was defeated by Woods by a score of 11-2, finishing second in conference. Willits still qualified for the national tournament  as he is ranked in the top 25 in the country.

Doyle placed third at last year’s PAC-12 wrestling championships at 174 lbs. This year, moving up to 184 lb. weight class, Doyle faced off against CSU Bakersfield redshirt sophomore Josh Loomer, who defeated Doyle by a score of 12-4 during their last meeting.

Loomer defeated Doyle once again in the finals by a score of 7-4. Doyle did not qualify for the national tournament, ending his junior season with a record of 20 wins and nine losses.

Turner and Willits now put their attention towards the NCAA wrestling championships in Minneapolis, Minn. from March 19-21 with the end goal of becoming All-Americans for Oregon State.