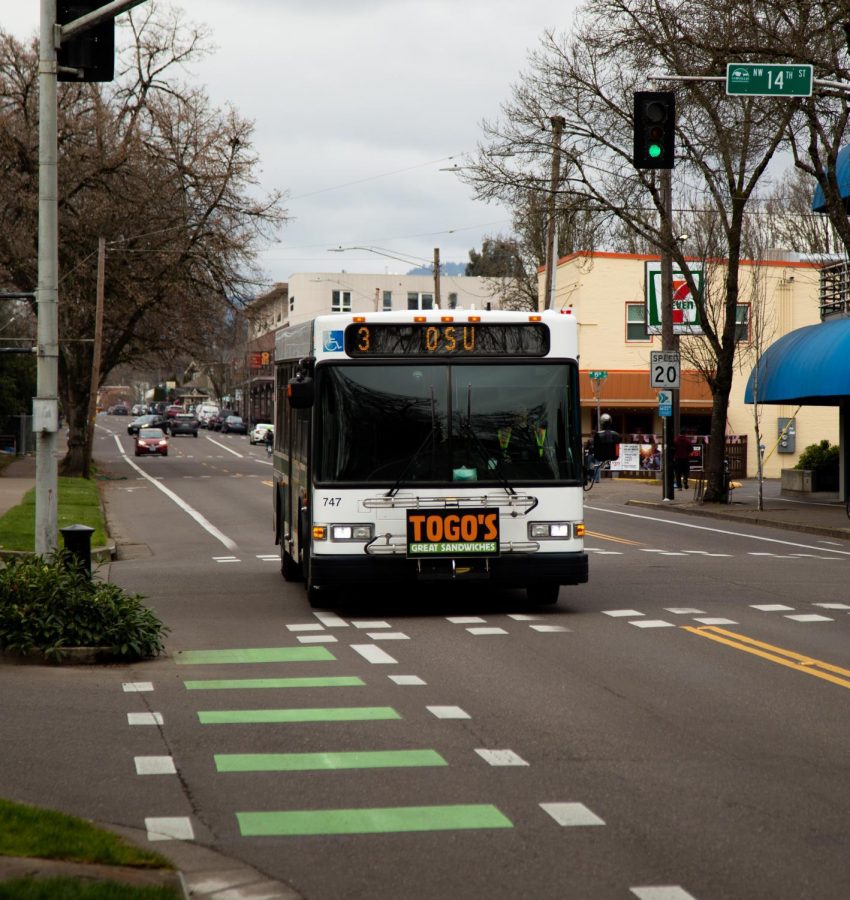 A Corvallis Public Transit bus makes it way down Monroe st. The city's transit service is free to ride.

With the upcoming Housing Fair and students deciding between new places to live, one of the first questions posited is, ‘how am I actually getting to campus?’

Living near campus usually correlates with higher rental prices. While walking is the simplest way of getting to school, it’s not a feasible option for everyone.

Of course, monthly and annual parking permits can be purchased from Oregon State University’s Transportation Services. However, the department is focused on providing viable alternatives for commuters instead of increasing the number of parking permits sold.

OSU have five main objectives they consider when planning future transportation; being bold in addressing the climate crisis, making the school accessible and affordable for students and staff, being good neighbors to the Corvallis, Ore. community, being good stewards of the land itself and to be financially responsible. They hope to accomplish this goal by reducing the percentage of trips that are made by a solo driver.

Currently, the OSU drive-alone rate is 32%, with a goal of reaching a 20% rate by 2030. According to Transportation Services Director Meredith Williams, reaching this goal is feasible.

In order for these drive-alone rates to decrease, support has to be provided for viable alternatives like biking, skateboarding and transit. Thirty-one percent of trips are made by walkers, another 20% are done by bike, while only 7% are using public transit. Two-thirds of OSU students currently live within a quarter-mile of a CTS stop.

Recently, the Corvallis Transit System expanded their services by upping bus frequency and including services on Sunday, now operating over all seven days of the week. According to CTS Transit Coordinator Tim Bates, this expansion results in an additional 10,000 service hours over the year.

The CTS has been providing fareless bus services since 2011, making it one of approximately 40 transit departments to do so. This is made possible by a fee collected from every resident that pays a utility fee. The bus routes sprawl across a majority of the city and typically arrive at hourly intervals.

“One of the barriers to getting people on transit is the cost, people didn’t want to pay necessarily 75 cents to go three or four blocks,” Bates said. “Along with that, it’s also good for social services, people who otherwise would be unable to take the bus. Now, again, there’s not a financial barrier for them to be able to do so.”

The CTS and the Associated Students of Oregon State University have also collaborated to create the Night Owl program, which includes the usage of three bus routes from 9:45 p.m. to 2:45 a.m. on Thursday, Friday and Saturday. These routes reach the southwest, southeast, and north corners of the city, providing Corvallis residents and OSU students with a free and safe option for getting home after dark.

Increasing safety for bikers and skateboard users has become a priority to transportation officials across the city. A recent amendment to the city’s Transportation Maintenance Fee will now allocate 1% of funds to pedestrian and bicycle safety projects like the introduction of low-stress neighborhood bikeways.

There are plans in place to convert 11th, 27th, and 34th streets into low-stress neighborhood bikeways. According to Williams, a few low-cost changes will make these routes safer and easier for bicyclists to travel to and from campus.

However, accessible transit options across the city are not always distributed equally. Reaching campus from South Corvallis can be difficult, as the only bus line that reaches that area weaves throughout the neighborhood and requires a transfer at the Downtown Transit Center. A majority of the current CTS bus routes have stops on either Monroe, Western, or travel directly through campus.

“I’ve taken the bus once. When I tried to get home I got lost,” said third-year ecological engineering student Sierra Smith.

Smith has lived in South Corvallis over the past two years and primarily gets to campus by bike, taking anywhere from 20 to 25 minutes. Despite enjoying the autonomy and exercise that comes with cycling, she still feels that using the bus could be turned into more of a viable option.

“I think I would consider using it more, particularly on the way home, if there was only one bus or if the transfer process was a little clearer,” Smith said.