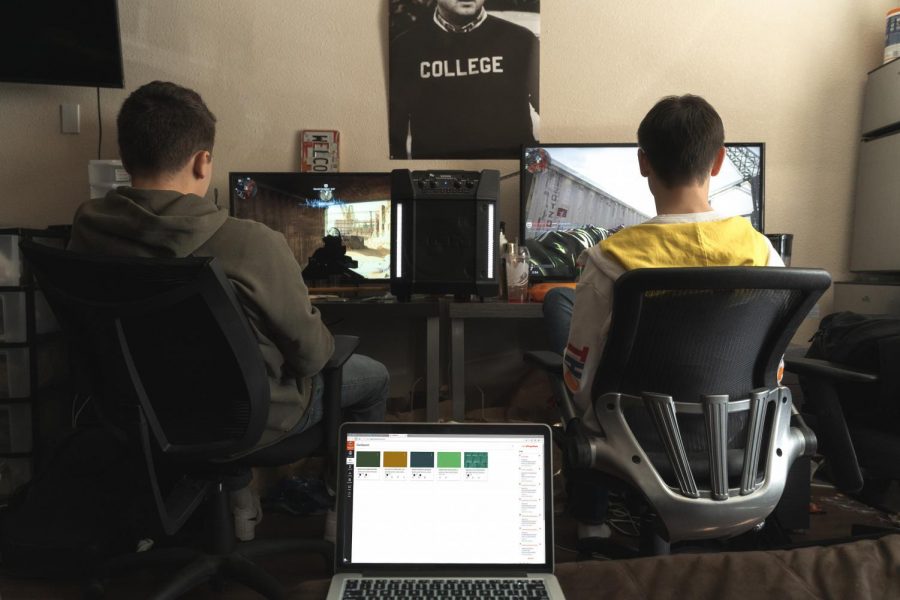 Two roommates play video games together in their shared space.

College roommates are part of the pinnacle undergraduate experience. Dorm rooms, small apartments and shared spaces are a part of the journey to getting a degree. For some, sharing a nightstand and shower with a complete stranger can be overwhelming.

There are times when a close-living space can bring students together to form life-long friends. Other times, it can seem like a living nightmare, because dealing with difficult roommates can be beyond frustrating. When stuck in a lease for a set amount of time, it can force students to compromise and deal with situations that test their utmost patience.

There are many ways to navigate through difficult situations when dealing with living-space conflict. The Associated Students of Oregon State University has a specific office dedicated to providing support for situations like these. Student Legal Services is located in the Student Experience Center office 232 offering legal advocacy for students who need to leave a lease or simply just want advice. Another available option is OMBUDS, on OSU’s campus in Waldo Hall 116, is a student mediation service providing impartial advice and listening ears to parties struggling to work through conflict.

Before all of this though, the most beneficial way to deal with subpar roommates is to not pick them in the first place. When searching for potential candidates, start off with asking basic lifestyle questions about sleeping patterns, cleanliness level, comfort level with guests coming over and noise curfew. Getting big questions answered in the beginning, leaving both people at ease, can help in selecting the right roommate.

KJ Barrett, a third-year emergency medical technician student, went through a difficult situation—living with a roommate who refused to pay her rent and continuously used Barrett’s things and didn’t clean up after herself.

“One of the big ones had to do with her always shorting me on rent and then would expect me to pay her for gas. The other big one would have to be how the place itself was treated,” Barrett said. “She would use the place like a dumpster and refuse to take out any of her trash, which led to us getting a horrible ant infestation. The last would be her always using all of my stuff when I was not there.”

Barrett said she tried to talk to her about her concerns many times, but her roommate was unresponsive, leaving Barrett to deal with all the cleaning and chore duties in the shared space.

“In the very end, after a big fight about the ants and trash all over the place, I decided that it was my time to just leave. It wasn’t worth my time anymore,” Barrett said. “Anytime she was there, I would go out to the grocery store.”

Barrett said she received concerning advice from one of her roommates’ past friends, but she didn’t think much of it. Now, she wishes she would have taken those precautions more seriously.

“At the end of the day, it is not worth the fight, and even though it may be more work for me to do. It was easier to just do it than to cause another fight,” Barrett said.

Barrett realized that her roommate and herself operated on two completely different  schedules that weren’t compatible. According to Barrett, fighting just wasn’t worth it anymore so she calmly avoided the situation when she felt she needed space. Sometimes physically separating yourself from the situation is the best thing you can do.

Living with roommates who leave your space a mess, or living in constant stress for your roommates’ safety is typically not ideal. College is a big step for a lot of young students, and living with people much different than yourself is an immense challenge on its own. Lilly Mann, a fourth-year psychology major, was faced with isolation upon moving in with a roommate she hadn’t met prior.

“The first red flag was when I couldn’t find my roommate on social media. This isn’t the biggest requirement, but it is a way of finding out who’ll you’ll be living with. She had renewed her lease, so this meant she had been living there the previous year,” Mann said. “I figured that would be awesome because she would have decorated the apartment to match her personality. Upon entering, it was bare.”

Mann said there was not one personal belonging in the living space except sticky notes on what cabinets and fridge space would be hers to use. Mann said everything was segregated and the roommate would stress to her that there would be no sharing involved.

According to Mann, the most frustrating part of this was that her roommate would sit in front of the TV all day long and refuse to watch anything besides Korean soap operas.

“She would plunk our chair right in front of the TV and start watching something I couldn’t understand. She would then remain there for the duration she spent in the apartment,” Mann said. “If she got home before me I could expect to be walking into a Korean TV show.”

In order to solve the problem, Mann tried to set days and times that she would like to use the living room. Mann said this led her roommate to disrespect her time in the living room by inviting a lot of friends over and ignoring Mann. After requesting a leasing agent mediation, whose job it is to help residents navigate through difficult situations like these, Mann’s roommate failed to show up to the appointment and then moved out soon after that.

“The lesson I learned is personalities really do make a difference, and opposites do not attract, no matter how hard you try to make it work,” Mann said. “I feel as though being open with a new roommate is especially important to establish a home that makes both parties welcome.”

Mann learned quickly that boundaries and expectations need to be set prior to making a lease-long commitment. She wanted to resolve her roommate conflict even going as far as to book a mediation appointment to try to work things out. Mann believes that being comfortable opening up about what you’re looking for in a potential living partner is the best way to make choices that are right for you.