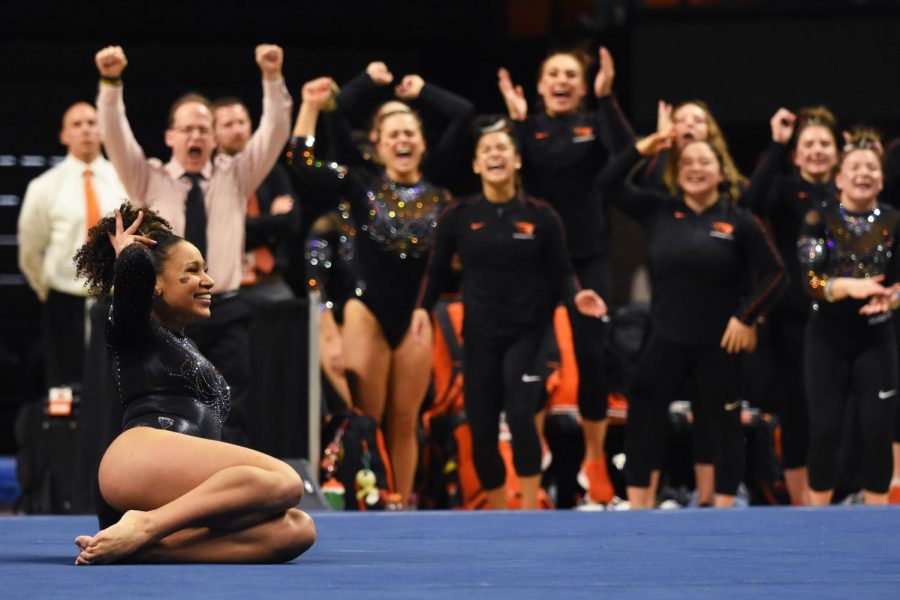 OSU senior Isis Lowery finishes her dance-filled, one-of-a-kind floor routine, while her teammates and coach celebrate at the edge of the floor on Friday, March 6.

Oregon State senior gymnasts Lacy Dagen and Sabrina Gill knew they only have a few weeks left in their OSU gymnastics career. Knowing this, both Dagen and Gill left their hearts out on the floor during the gymnastics meet versus the #12 Washington Huskies.

Dagen was not able to compete in the last gymnastics meet against UCLA on Feb. 29 as an injury sustained during practice had sidelined her from competing. But Dagen bounced back and was able to score a 9.875 on both her vault and beam events.

Although Dagen was proud of her scores since coming back from injury, and the overall team performance, she said she feels that her team has not reached their full potential yet.

“It’s just those little things that we need to really hone on. Those sticks, those pointed feet, those bigger splits,” Dagen said. “We have so much potential, and we just haven’t quite put all it together yet, but I can feel that we’re almost there and we’re on our way. I feel like next week is the one.”

The Oregon State team had improved their vault event score from 48.725 against UCLA to 49.000 against Washington.

“I know for vault, we’ve not only been saying we need to do more stick drills, but actually putting it into action, and adding in new ones that we haven’t been doing the rest of the season, like stick drills onto harder landing, and show vaults,” Dagen said.

“I mean, last time I did All-Around was sophomore year,” Gill said. “I’ve only been training floor and vault for three weeks. It’s still fairly new but I’m just happy I get to have fun and do all four.”

Gill, who was also battling some injuries, said her performance on the night improved her confidence.

“I definitely had some struggles, dealing with a lot of head injuries and random flukes, but I think I got a good rhythm now and I’m back in the groove,” Gill said. “Even in practice, that’s been getting alot better and my confidence has been building each week.”

Interim Head Coach Michael Chaplin said Gill was a fill in for Oregon State freshman gymnast Kayla Bird, who scored a 9.875 against UCLA.

“Kayla Bird was not feeling well,” Chaplin said. “We weren’t sure how much she was going to be able to do today. And I knew floor would be the hardest event for her. She said ‘Hey look Michael, I just don’t feel strong enough to do floor.’ We said ‘okay,’ and we knew Sabrina had been working really hard, and we thought this would be a good night for her. She got a good floor routine in for us.”

Chaplin said it would depend on who has the better week for if Gill would keep Bird’s place in the floor routine.

“It’s great to have both of them available, the more depth the better,” Chaplin said. “The more people we have available, the better, because you never know what will happen. So we want as many people available as possible. We’ll just see, we’ll watch them this week and see who’s ready to go next week.”

The Beavers return back to Gill for their final home meet against University of Illinois on March 14. This senior night meet for the Beavers is scheduled to start at 1 p.m.