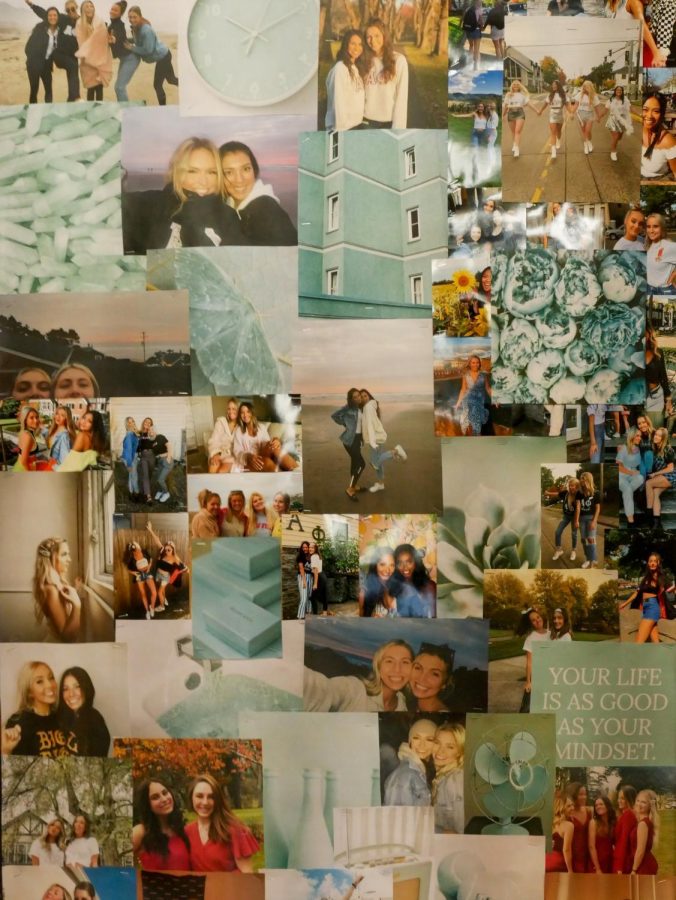 One of the many photo collages that can be found in Alpha Phi, celebrating the sisterhood and giving the halls and stairways pops of color. “You make so many amazing friends that you would never have expected,” said Alpha Phi President Molly Stadeli.

For students who want to live in large, but tight-knit communities, then fraternity or sorority housing may be a good choice. There are currently 49 chapters at Oregon State University, all sharing six core community values: scholarship, philanthropy, inclusivity, community service, friendship and leadership.

Phi Delta Theta is a fraternity located just north of campus on Northwest 13th Street. President Danny Dhas, a second-year student who is majoring in business administration, said one of the greatest things about being in his fraternity is that he gets to “be around all the brothers and be around the guys.”

“In the house you know everyone, there’s 50 guys that you can hang out with,” Dhas said. “There’s also the amenities of having a chef at the house and a gym downstairs. But the biggest thing is just being with the guys.”

Dhas said that whenever you need help or want to do anything, there’s always someone there to join you, be it your roommates or someone right next door.

“There’s always a group of guys that are going to the gym, so if you don’t want to go to the gym by yourself, you’ve got other guys going,” Dhas said. “[If] you want to play basketball, then we always have people playing basketball.”

Dhas said he didn’t really know about fraternities before he joined Phi Delta Theta, but he liked all the guys he met during the rush period, so he decided to join. “I just decided to check out a few events, and I liked all the guys, so I took a shot at it,” Dhas said.

Dhas said he would 100% recommend others to join.

Alpha Phi is a sorority located on Northwest 25th Street. President Molly Stadeli, who is a third-year student majoring in human development and family sciences, said her favorite part about living at Alpha Phi is that she gets to be constantly surrounded by other people. She said living in this environment has led her to grow so close to every girl in the house.

“I transferred here, not knowing basically anyone except a girl I went to high school with,” Stadeli said. “I was immediately immersed into this environment, and so I found my friend-group that I have grown so close with.”

Claire Gorman, a business administration major and member of Alpha Phi, said the sorority provides an incredible support system.  “Every day is crazy,” she said. “If it’s a bad day, then you have so many people here to cheer you up, or to celebrate the happy and sad times together.”

Stadeli seconded this, saying, “whenever you want to do something, there’s always someone else to do it with—you’re never alone. You make so many amazing friends that you would never have expected.”

Gorman said there tends to be a stigma about sororities, that they’re full of “crazy, party-people, who don’t do anything and don’t do homework.”

But she said girls can set positive examples, and other girls in the house can learn from these good examples. “You’re exposed to all these great attributes that help you become a better person,” Gorman said. “I think there’s a lot of leading by example. You can’t not grow from living in [a sorority].”

Stadeli described living in Alpha Phi as a once-in-a-lifetime experience.

“Living with 50 girls is such a unique experience, that nowhere else you can really do that. You learn so much, not only about yourself, but about other people, and you grow so much as a person,” Stadeli said.