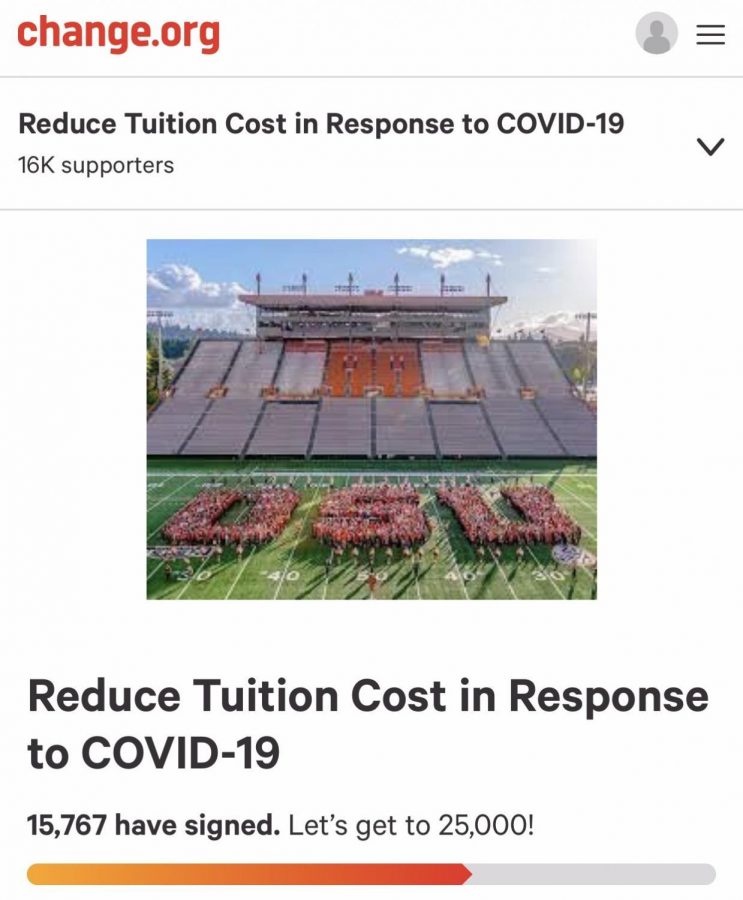 By The Baro Staff

A screenshot taken on March 31, 2020 shows a petition, titled “Reduce Tuition Cost in Response to COVID-19,” which calls on the university to consider reducing the cost of attendance. The petition has been making rounds the past few weeks and has reached over 15,700 signatures from Oregon State University community members, according to its page on the Change.org website.

A petition that has been making rounds the past few weeks has reached over 15,700 signatures from Oregon State University community members, according to its page on the Change.org website.

The petition, titled “Reduce Tuition Cost in Response to COVID-19” calls on the university to consider reducing the cost of attendance. “The relocation of classes to online is an inherent equity issue that should be addressed through a lower cost of attendance,” the petition page states. “This change in education forces students to quickly find the means of access to laptops and wifi if they choose to remain in their respective hometowns or on campus. It is completely unfair that economic status is going to dictate if students are able to return home or stay on campus.”

Sherman Bloomer, associate vice president of budget and resource planning and member of the University Budget Committee, said the university is committed to delivering the same services remotely.

“That commitment to delivering the same programs does mean keeping and paying the same faculty and staff for spring term which is why the university does not anticipate changing spring tuition,” Bloomer said.

The Budget Committee has been looking for ways to help students.

“Some changes to student’s accounts and billing (suspending interest charges on student accounts for spring for example) are also being made—some of those are still under discussion,” Bloomer said.

However, many students have raised concerns about tuition. Keely Hayes, one of the signatories of the petition and a food science and technology student, said the out-of-state students are facing extra challenges this term.

“I’m paying upwards of 8,000 dollars in tuition for just three lower-credit classes,” Hayes said. “I also think the reasoning/excuses behind keeping certain fees for which we don’t have access [to] is ridiculous. If I wasn’t graduating this term, which makes it 10x worse, I would 100% debate dropping my classes because I refuse to pay empty money.”

Ashleigh Ehrke, a bioresource research student, has concerns that even with the current tuition levels, students are not being served as well.

“OSU needs to seriously consider students’ learning types and differences, like how they value culture and diversity, we all don’t learn the same,” Ehrke said. “In case it takes a failed class to learn how to take classes from an online platform, we should be appropriately compensated at least for the initial term of online platforms so that we will be able to afford continuing our education. Due to the lack of in-person lectures and learning, it is the duty of OSU to be able to adapt and change along with the adaptation and change exhibited by students, so their academic performance should be forgiven if those do not succeed best online, don’t succeed the first time.”

Student fees are also a common point that students are concerned about. Jonathan Weinberg, a civil engineering student, has concerns over where the money is going. Weinberg said that a large number of student employees have been laid off from their jobs.

“I don’t pay student fees so the director of Dixon can cash their paycheck. I pay it for access to Dixon and as a result of that, the director of Dixon gets their paycheck funded,” Weinberg said. Similarly, I don’t pay my student fees for Scott Barnes to run a multi-million dollar Athletics ad campaign. I pay it for access to a student section at baseball, and therefore Scott Barnes has some extra money to spend.”

Weinberg said they would like the Associated Students of Oregon State University, the university’s student government, to consider lowering student fees, following the lead of other institutions around the state.

With the start of spring term, more students are asking if they will have a bailout of their own from Oregon State University.

“Tuition rates should be lowered, by mere compassion for all people of academia to adapt during this trying time, when many may need to discontinue due to the virus’s impact on the majority of student jobs,” Ehrke said.