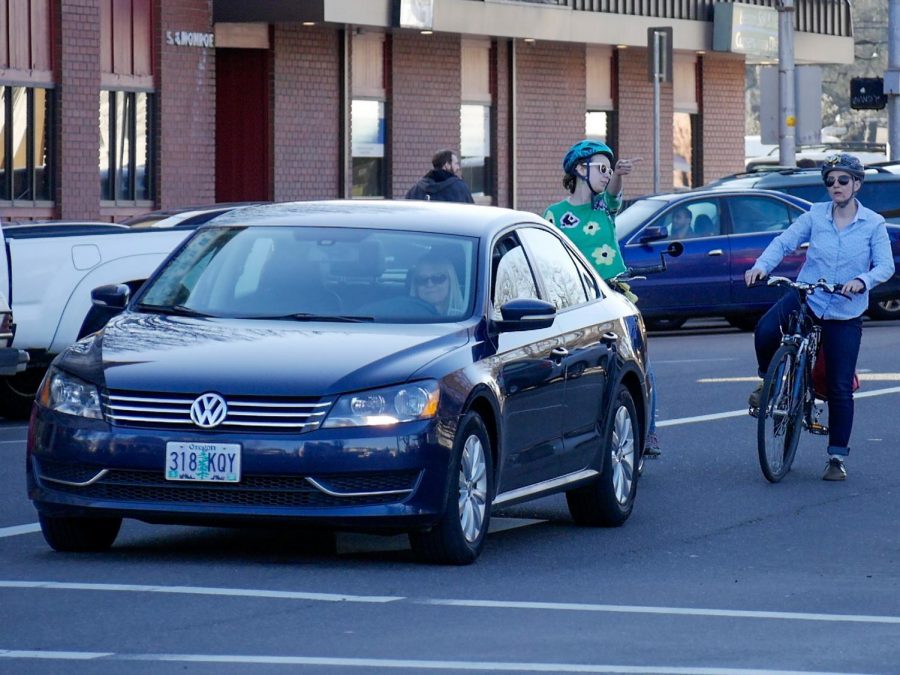 Two cyclists wait behind a car as they navigate their way around downtown Corvallis. The Corvallis City Council recently voted to direct funds toward future safety projects.

On Feb. 18, the amendment passed, with seven councilors voting yes for the amendment, one voting no and one absence. Ward 1 City Councilor Jan Napack was the sole no vote, and Ward 7 Councilor Paul Shaffer was absent.

The 1% will be directed into a designated fund right away, while the actual funding will not start being used for projects until approximately the summer of 2021 which will allow the fund time to get larger and for a project to be executed, said Corvallis City Manager Mark Shepard.

The 1% amendment to the Transportation Maintenance Fee was proposed to the council and voted on after the death of an 11-year-old girl at a crosswalk on Highway 99/Third Street early last month.

The city, working with the ODOT, has already implemented safety measures along the Corvallis section of Highway 99 to help improve safety conditions.

Speed radar signs will now remain up on the Highway 99 Chapman Street crossing permanently. The city also has signs which will allow them to inform pedestrians in an event the flashing lights are not working for a crosswalk, according to Shepard.

“We have spare parts on hand so we can facilitate a fix on any damage or malfunctioning equipment on the flashing lights,” Shepard said.

ODOT has put in “speed reduction ahead” signs off the south ramp of Highway 34 to Highway 99. There are plans for ODOT to redo the striping at the Chapman crossing to improve visibility in the future, but the weather will play a role in when the project starts, Shepard said.

ODOT has reduced speed in sections of Highway 99 which impacts south Corvallis. The 35 miles per hour speed limit on Avery Ave. to Hopkins Ave. is now 25. The stretch of Hopkins Ave. to SE Park Ave. which was 35 is now 30 mph.

Oregon Department of Transportation plans to start a corridor study this summer on Highway 99, it will be a two-year planning process, Shepard said. From the study, it is possible ODOT will find new ways to make more improvements.

With these updates in place, city staff and council members can look into the future of other safety projects planned around Corvallis. The city has a list highlighting areas of town that could be improved by making adjustments to the surrounding road and sidewalks.

“We have some data about where there are safety issues and I think that would be a reasonable thing,” Barbara Bull, the councilor of Ward 4 said. “I would hope to see some improvement around campus.”

This has some concern with the funding for pedestrian and bicyclist safety projects around Corvallis. Napack voted no to the amendment on Feb. 3, which necessitated the second vote on Feb. 18.

“It’s not enough money, it needs its own funding track,” Napack said. “We really need to do this right and it’s going to take a while.”

The Corvallis City Council will have meetings in the summer to discuss transportation priorities, according to Bull.

“When we talk—hopefully in the summer—I will be looking for more revenue,” Bull said. “I’m hoping that staff will have other ideas of where revenues can come from because people are concerned about using pavement money on it.”