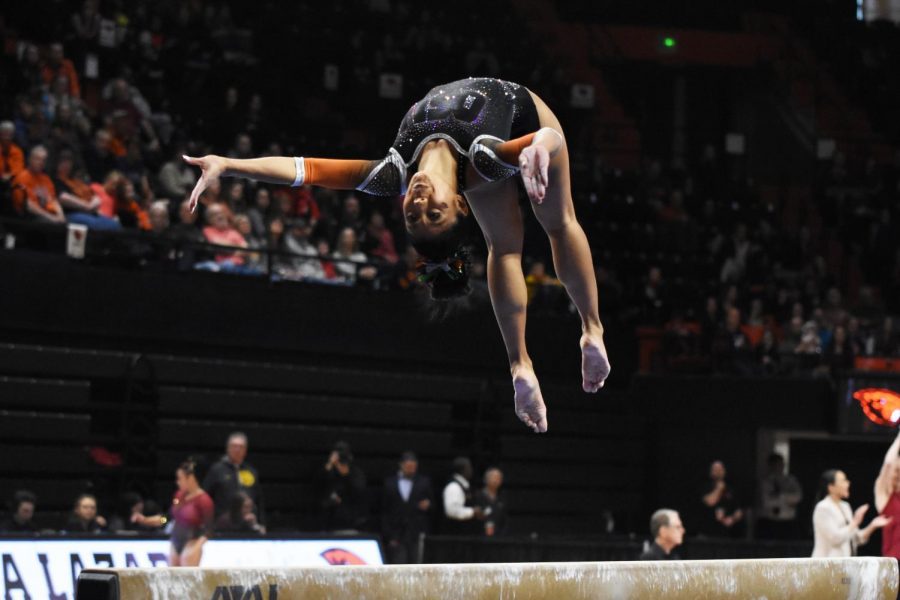 OSU senior Maela Lazaro competes a back layout on beam as the second part of her back handspring, back layout acro series during the third rotation of the OSU vs. ASU vs. LSU tri-meet at Gill Coliseum, Saturday, Feb. 8, 2020. Lazaro matched her personal career-high on beam with a 9.925, and OSU left the rotation tying their season-high team beam score with a 49.375.

The No. 22 Oregon State Women’s Gymnastics team held a tri-meet in Corvallis against the No. 30 Arizona State Sun Devils and the No. 9 LSU Tigers on Feb. 8. More than 2,800 people filled Gill Coliseum to cheer for the Beavers.

The LSU Tigers won the meet in the end, scoring 196.775 points throughout the four events. The Beavers finished in second place, following closely behind with 196.700 points. The Sun Devils finished in third place with a score of 195.600 points.

OSU interim head coach coach Michael Chaplin, who is filling in for wife and head gymnastics coach Tanya Chaplin while she is on medical leave, had a positive outlook on his team’s performance.

“I think we’re continuing to get better and better. I think there were some trouble spots today, but they didn’t let it hurt them,” Chaplin said. “They bounced back and recovered from that, and that’s a good sign. They’re fighting, and if they continue to fight, and continue to work on the little things we have to cleanup, then they’re going to really be able to finish this season strong.”

Chaplin also talked about how the team fed off of each other’s energy and how that makes the team successful.

“They’ve learned that where they get their energy is from their teammates, so even when we’re away, they feed off each other, and that’s one of the secrets to the success of this team,” Chaplin said. “They know they can really feed off each other for what they need to do.”

OSU junior Savannah Force, who scored a 9.900 on her floor routine, said her team’s training and practice has led them to the success that the team is having.

“I think we’ve really just set ourselves up pretty well, especially in the preseason. We did so much cardio and endurance training,” Force said. “And also the lineup is just super comfortable with each other and in ourselves because we’ve been going the extra mile in practices to make sure the extra passes we need, or setting up extra drills.”

Force also said the team’s dynamics help with their communication and support.

“We all just have an honest and open relationship with each other, and so we’re able to hold each other accountable when we need to do an extra one here or there. And I think that’s been translating well, because it’s just like practice and we’re able to just have fun,” Force said.

OSU sophomore Kristina Peterson, who scored a 9.750 on vault and a 9.850 on floor routine, also said about how the team’s bond is an essential aspect.

“We tell each other we’re family, we’re sisters. This is the thing about our gym, we go out there to compete and have fun, and our coaches are our parents. We treat them the way we want to be treated, so we always treat each other with kindness and love and passion, and I think that shows throughout  season,” Peterson said.

Peterson said head coach Tanya is “like a mom to us” and that the team is dedicating their successes to her, especially in her leave of absence.

The Beavers are back at Gill Coliseum on Feb. 29 where they will face the UCLA Bruins in their annual Dam Worth It meet.