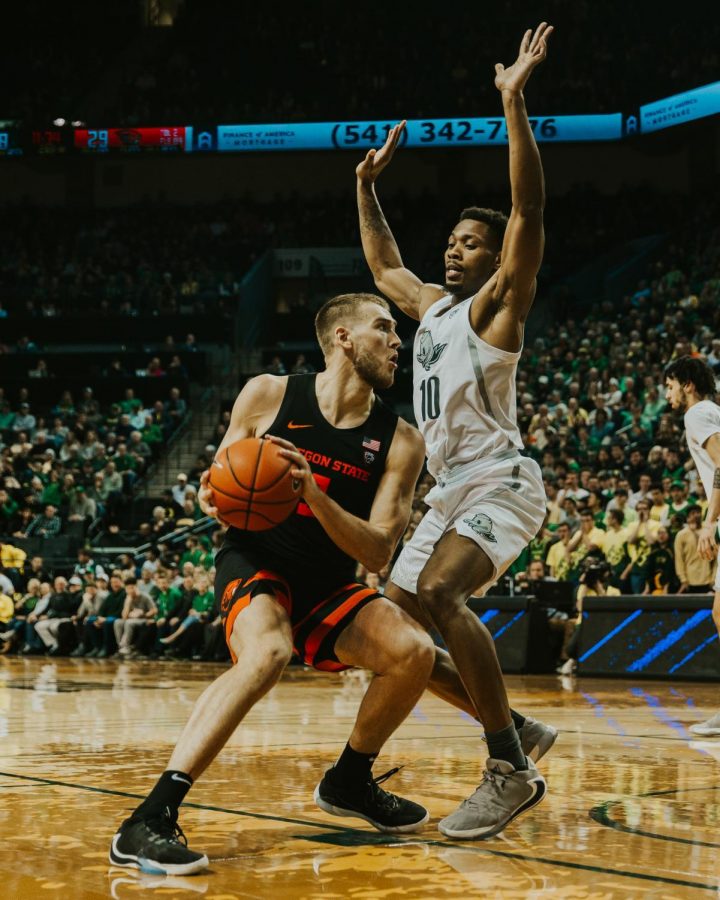 Two of the schools’ all time greats in Oregon State’s forward Tres Tinkle and No. 14 Oregon’s guard Payton Pritchard battled for one last regular season meeting of the Civil War.

Tinkle and the Beavers had held the previous edge of this rivalry, rattling off three consecutive victories versus the Ducks. This night was different though, as Oregon closed out the Beavers with a strong second half, winning 69-54 on Thursday, Feb. 27 in Eugene, Ore.

For the sold out crowd at Matthew Knight Arena, the game may hold a special place down the line for fans of both schools as Tinkle and Pritchard each now lie in the history books for their programs as their final seasons are winding down.

Pritchard, who is a favorite to win the PAC-12 player of the year and conceivably an All-American spot, got the best of Tinkle on this Civil War occasion. Pritchard led all scorers with 23 points, helping to carry his team to a victory.

Oregon head coach Dana Altman said Pritchard has been important to the program throughout his tenure with the Ducks.

Pritchard is a local product out of West Linn, Ore. As Duck fans have seen him grow before their eyes, he has taken the “old fashioned route” of sorts, staying in Eugene for every season of his four years of eligibility. This path does not happen as often as it used to with the newer rule of one-and-done rule of college basketball which allows players to forego their collegiate careers even after one season if they have the talent for the next level.

As Pritchard closes in on his finale, another senior with a powerhouse program down the road has maybe gotten the short end of the straw in attention with OSU senior Tres Tinkle.

Tinkle has seen the ups and downs of the team his father leads as head coach Wayne Tinkle through his time in Corvallis. Tinkle struggled from the floor against Oregon, scoring just 14 points on the night as he could never find his rhythm with the Ducks swarming defense in the paint.

Even with the loss, Tinkle will go down in the record books as one of the best men’s basketball players to wear the orange and black. Tinkle will end the season breaking multiple records, including the all-time scoring record over former Beaver great, Gary Payton.

Tinkle and Pritchard are a rare breed in the current game and will be missed by both programs and the PAC-12.

“We just tried to play a lot of defense. Pretty much helping in any way I can,” Mathis said.

Even with the final score being lopsided, the Beavers had it going early, especially with junior guard Ethan Thompson, who will likely be taking over Tinkle’s captain spot next year for the Beavers. Thompson led Oregon State in scoring for the night with 15 points, converting early.

Perhaps the most exciting play of the game, Thompson had a half-court heave at the first half buzzer, banking in a wild shot. The shot would have brought the Beavers within one point, but it was called back as the shot clock went off before the ball left his fingers. The lead was Oregon’s at 29-25 at the half and the Ducks never looked back.

“This was personal. For us we can’t lose four times in a row,” said Oregon redshirt senior forward, Shakur Juiston.

With the win, Oregon is now tied for the lead in the PAC-12 conference with UCLA, a surprising contender led by former Cincinnati coach, Mick Cronin. Arizona State and No. 21 Colorado both lost on Thursday night as well, leaving room for an enticing finish to the season in the conference.