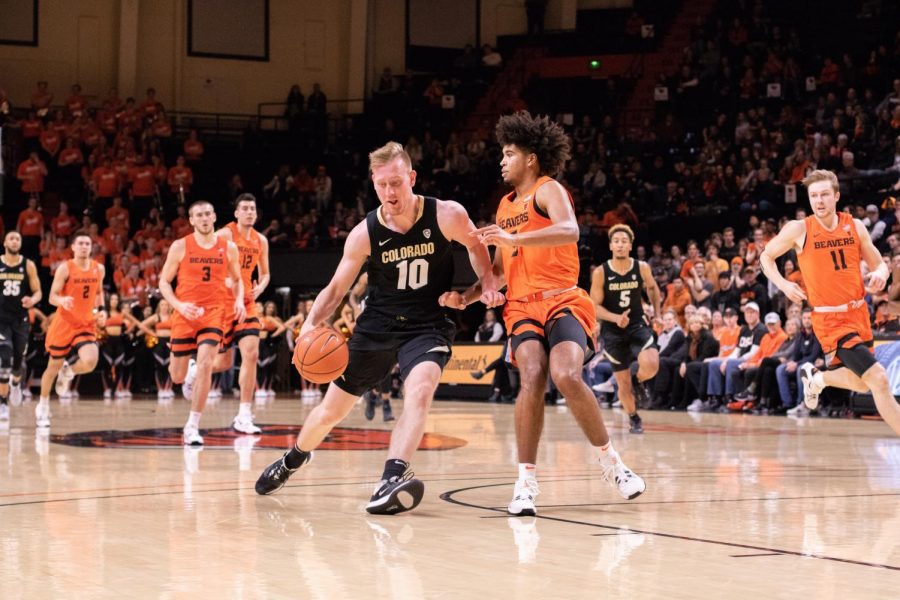 Coming into the Feb. 15 game against the Buffaloes, Oregon State’s March Madness hopes were already hanging by a delicate balance. But a win over No. 16 Colorado had a chance to give the Beavers a much needed boost to their tournament hopes.

However, after suffering their largest loss of the season against the Colorado Buffaloes by a 69-47 final, the Oregon State Men’s Basketball team’s record slipped to 15-10 and left the Beavers in need of a strong close to the regular season to keep any hopes of reaching the NCAA Tournament.

Oregon State already had two wins against currently ranked PAC-12 teams, having beat the Buffaloes earlier in the season on Jan. 5 and winning their first Civil War matchup of the season against the No. 15 Oregon Ducks on Feb. 8. Winning in their second game against Colorado not only would have given the Beavers their third win against a ranked team, but it would also have given them an undefeated 3-0 record against ranked opponents on the season.

Instead, the loss puts the Beavers on the outside looking in. At 15-10, Oregon State will need to win the remainder of their regular season games to reach 20 wins, with a Civil War rematch on Feb. 27 waiting for them in Eugene, Ore.

In last season’s NCAA tournament, only seven of the tournament’s 68 teams got in with under 20 wins, with three of those teams coming as automatic qualifiers from having won their conference championship. Given that recent history, the Beavers may need to win their remaining five games and put together a strong showing in the PAC-12 tournament.

Despite last year’s tournament teams showing how difficult it can be to make it into March Madness without 20 or more wins, Beavers’ head coach Wayne Tinkle made sure to note that there are still plenty of games left for Oregon State to get where they need to be.

“We can’t worry, we just got to stay in the moment,” Tinkle said. “Just try to prepare and win games, and the rest of it takes care of itself.”

But even though the final score will cost Oregon State a ranked win with extensive postseason impact, their effort throughout the contest showed the Beavers still have signs of life going forward in their schedule. Though the road ahead will feature tough road games against Oregon, Arizona and Arizona State, the effort against Colorado showed that Oregon State can compete with the best teams the PAC-12 conference has to offer.

A Beavers scoring defense, ranked outside the top 100 nationally, held their own against the Buffaloes, keeping Colorado from finding much rhythm from the field. After holding Colorado to three made field goals on their first 11 attempts, Oregon State closed out the final 3:41 of the first half by keeping the Buffaloes from making a shot.

Beavers’ senior forward Tres Tinkle was visibly frustrated after the loss, blaming his teams’ struggles through the first half and beyond to poor execution on their part.

“Coaches make an emphasis to get into the paint and jump-stop, and when they collapse look out, and we just didn’t do enough of it,” Tinkle said.

While strong defensive efforts carried through the rest of the way for Colorado, Oregon State struggled to match the same defensive pace. The Buffaloes managed to put up big points in the second half, taking advantage of some of Oregon State’s weaker aspects including three-point shooting and free throws.

Oregon State had its worst three point shooting performance of the season against the Buffaloes, shooting one for 17 from behind the arc compared to Colorado’s nine for 20. The Beavers’ poor shooting found its way to the free-throw line as well, where Oregon State shot eight for 17 as a team on their foul shots compared to the Buffaloes’ 16 for 23.

After the game, OSU junior guard Ethan Thompson said they played with good energy and practiced well all week, but felt the three-point shooting ended up making the biggest difference in the outcome.

“I think we just lost it on the three point attempts,” Thompson said. “We only had one, they had nine of them. That was pretty much the deficit right there.”

If the Beavers hope to right the ship and find their way into the NCAA tournament, they will need to find a way to clean up their game sooner rather than later. With so few games left, the margin for error on Oregon State’s tournament chances remain razor thing, and they will only get one last chance to go on a run with their historic senior class.

If the Beavers aren’t able to secure an NCAA tournament spot this postseason, both Tinkle and Kelley would end their Oregon State careers without a March Madness appearance.

In order to get their two graduating seniors one run in the tournament, the Beavers will need to make a deep conference tournament run or hope they can play winning basketball the rest of their regular season. And despite the loss to Colorado, Wayne Tinkle believes his team can improve enough to deliver to send the senior class out strong.

“All we need to do now is get ourselves better the next couple days, prepare for our next opponent, and make sure we’re that much more ready to go after it,” Tinkle said.

The Beavers will get their next chance to fight for their postseason lives on Feb. 20 when Oregon State will travel Tucson, Ariz. to take on the 18-7 Arizona Wildcats. Tipoff is scheduled for 5 p.m.