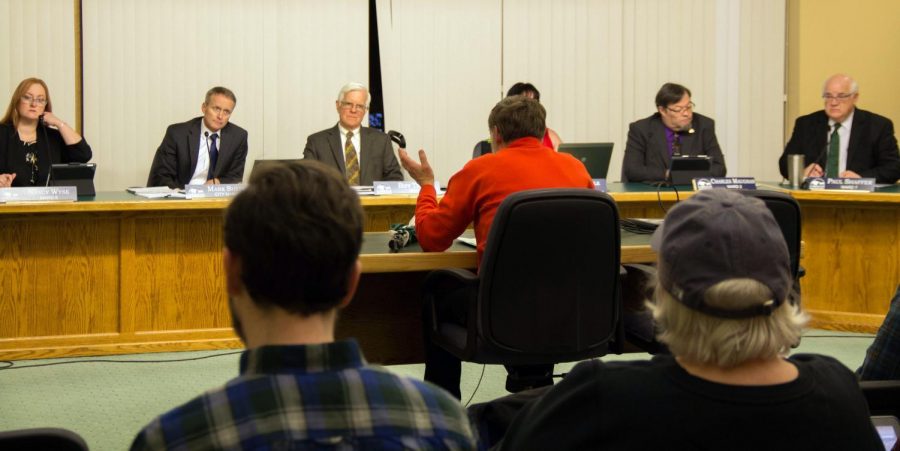 Jay Thatcher, a Corvallis resident and retired physical education teacher, speaks to the City Council about the hazards on Third St. on Feb. 3. The street has been the site of two pedestrian deaths within the last few years, the most recent occurred in early January when an 11-year-old girl was struck by a car while crossing in a designated crosswalk.

On Feb. 18, the Corvallis City Council will come to a final vote on an amendment directing at least 1% of the Transportation Maintenance Fee for pedestrian and bike safety, which would total between $24,000-26,000.

The amendment was put to an initial vote and supported by a majority of the City Council on Feb. 3, with seven councilors voting yes to pass the amendment, one voting no and one absence.

Because the vote was not unanimous, the amendment must be voted on again at the Feb. 18 City Council meeting. To pass the amendment and put it into effect, a majority of council members must vote yes on the second vote, according to City Public Information Officer Patrick Rollens.

Allowing amendment of the Transportation Maintenance Fee to go towards safety became a topic for the council after the death of an 11-year-old at a crosswalk on Highway 99/Third Street last month.

Since the accident, speed radar signs have been installed to inform drivers when they are going above the speed limit and signs to slow down have been placed on the highway warning people of the crosswalk ahead.

Jan Napack—who has been the councilor for Ward 1 since Jan. 2019—voted against the amendment being added to the Transportation Maintenance Fee.

According to Napack, the reason she voted no was because the city created the Transportation Maintenance Fee to act as maintenance for the upkeep of Corvallis sidewalks and roads.

“If you read the ordinance, it’s explicit. It’s (Transportation Maintenance Fee) only to be used for particular things, like resurfacing… street reconstruction,” Napack said.

“If you were to pass a fee for x, then later on you want to add y… it’s not a clean way of doing it, it’s what I call a slippery slope,” Napack said.

Ward 4 Councilor Barbra Bull has been in support of the amendment to the Transportation Maintenance Fee, and believes it is likely to pass on the second vote.

“Some people think this is the wrong revenue stream. I was willing to have a conversation about using other revenues, but the suggestion was we couldn’t do that until June. Rather than wait until then, I thought we should go ahead and do this for now,” Bull said.

The council will have a larger discussion in June on how to spend the transportation money, according to Bull.

Napack said she is still in favor of providing Corvallis bikers and pedestrians with safer streets. Lights, speed bumps and raising of the sidewalks are things she is in favor of.

Even with the support shown for the amendment at the last meeting, there remains a chance the ordinance could swing no.

Rollens said if the amendment doesn’t go through next meeting the ordinance will go away, meaning city council would have to come up with a new way to pay for pedestrian and bicycle safety.