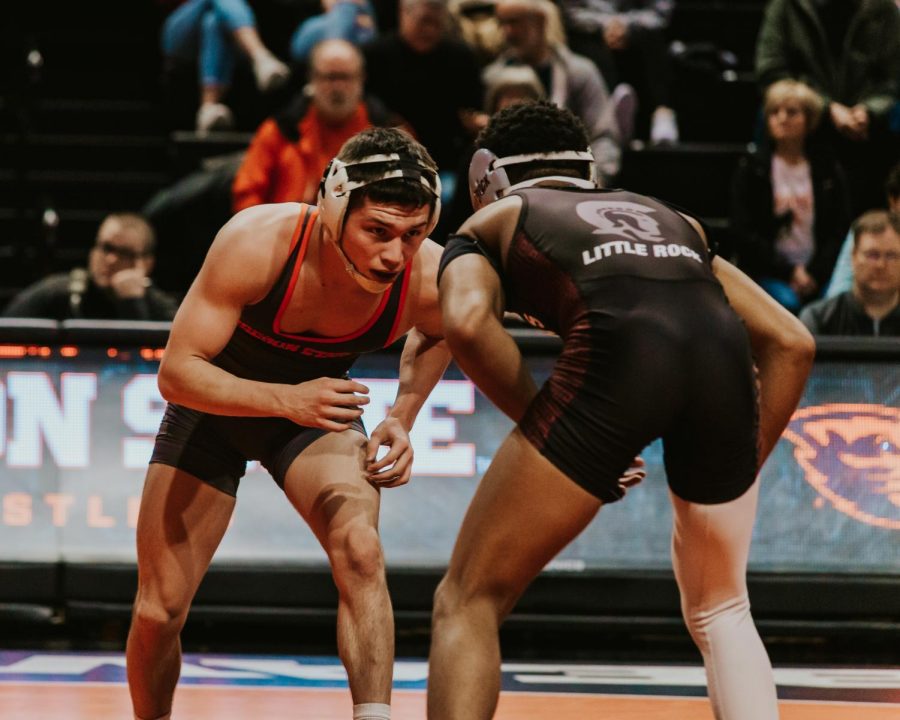 Brandon Kaylor, in the 125 lb. weight class, competes against UALR on Saturday at Gill Coliseum on Feb. 15.

The Oregon State Wrestling team got its first conference victory on Feb. 15 as they defeated the newest member of the PAC-12 conference, the Arkansas-Little Rock (UALR) Trojans at Gill Coliseum by a team score of 42-0.

The Beavers now move to 7-6 as a team and are 1-3 in conference dual meets.

OSU redshirt junior Devan Turner won his match against UALR junior Paul Bianchi by a score of 8-6. Turner, ranked No. 10 in the 133 lb. weight class, had a come-from-behind victory after trailing by one point at the end of the second period. The victory marked Turner’s 23rd victory of the season.

“I’m proud of Logan Meek and Jackson Mckinney. They wrestled tough. Jackson got a tech-fall, Logan won. Logan had a good weekend so I’m proud of him,” Turner said.

OSU redshirt sophomore Grant Willits won his match against UALR redshirt freshman Connor Ward by a score of 10-0. Willits, ranked No. 25 in the 141 lb. weight class, had an action-packed match with both wrestlers scrambling for better position.

Willits was still able to walk away with his 20th victory of the season, despite having two scramble-situations during the match.

“I’ve been known to scramble throughout my life and throughout wrestling, so when I get in those positions, I try to stay calm,” Willits said. “I practice it in the room, rolling around with these guys. I just stay calm for the most part and try to come out on top.”

Stigall said he had to change his focus versus UALR after losing his match the previous night at home versus California Baptist.

“Didn’t wrestle my best last night, so I just had to make a mindset change, and then try to come out here and fix some things and wrestle a little better,” Stigall said. The win was Stigall’s 16th victory of the season.

OSU redshirt sophomore Aaron Olmos defeated UALR freshman Will Edgar by a score of 11-6. Olmos maintained control throughout the match and earned his 11th victory of the season.

“We’re wrestling a new team to the PAC-12, so I feel like we represent ourselves well, and it was a good team win,” Olmos said.

OSU redshirt freshman J.J. Dixon secured a victory of his own by pinning his opponent, UALR junior Dylan Johnson, during the second period. Dixon earned his fourth pin of the season, and his 14th victory of the season. He credited his teammates for his victory.

“My teammates, they helped prepare me to get here,” Dixon said. “I love the team atmosphere this year, they’re pushing me to new levels. This team is something special, I’m so happy about this team, these are the best teammates I’ve ever had, truly.”

The Beavers return back to Gill Coliseum on Feb. 22 where they will take on the Cal Poly Mustangs at 1 p.m. The duel will be the final meet of the season for the Beavers before the PAC-12 championships begin on March 7 at Stanford University.