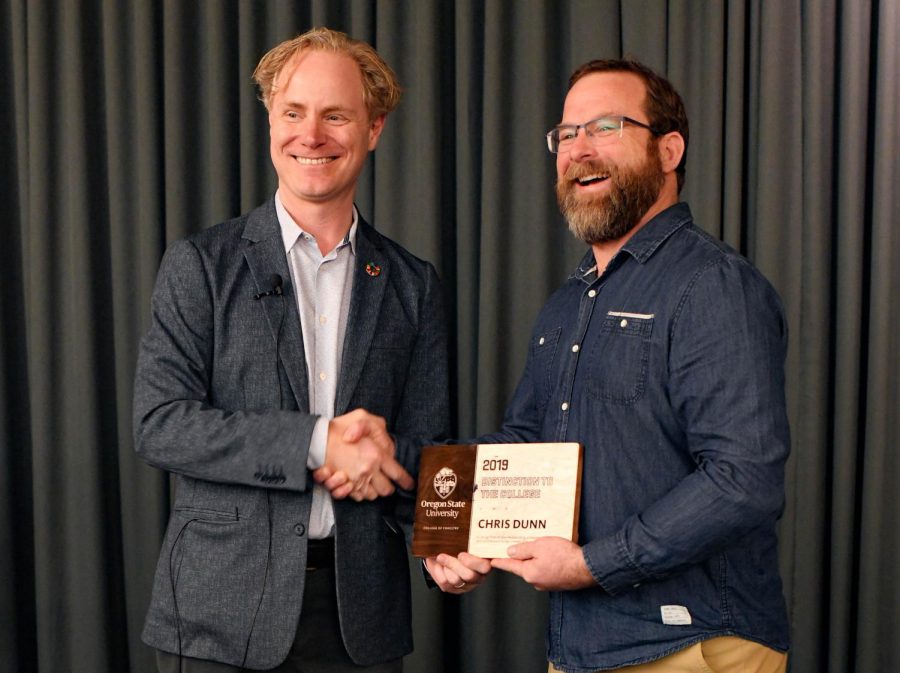 Postdoctoral Research Associate Christopher Dunn, right, shakes hands with Interim Dean for the College of Forestry, Anthony S. Davis as he receives the Dean’s Award for “Special Service to the College of Forestry.” Dunn received this award for his efforts with Governor Kate Brown’s Wildfire Council to update and improve fire management policies and procedures at OSU.

New digital tools, computer mapping and research from Oregon State University aims to mitigate and manage wildfires, as well as prepare for a future of intense climate-change-induced fire seasons, according to Chris Dunn, a research associate in the College of Forestry.

Dunn’s recently published article, “Wildfire risk science facilitates adaptation of fire-prone social-ecological systems to the new fire reality,” highlights the technology created by Dunn and his colleagues. On Feb. 6, Dunn received the “Dean’s Award for Special Service to the College of Forestry” for his research and its part in Governor Kate Brown’s Wildlife Council efforts to update and improve fire management policies and procedures in Oregon.

Dunn’s technology consists of three parts: a qualitative wildfire risk assessment, which uses a fire simulator and rating of the intensities of fires to assess burn probability; the suppression difficulty index, which refers to the ratio of potential fire behavior against the ability of a firefighter to access the landscape; and the potential control location atlas, which analyzes and incorporates data from the areas and samples where fire managers have successfully contained large fires.

“Large fires are here to stay, and we have a choice in what the outcome of those fires are. This information fundamentally informs that choice, and then it’s up to us as a society to then choose the path we want to go forward with,” Dunn said. “But, without these tools, there’s a lack of information and continuity to make good decisions.”

Jim Johnson, the senior associate dean of the OSU College of Forestry, program leader for the Forestry and Natural Resources and Extension Program and the head of the Department of Forest Engineering and Resources Management, said Dunn’s work is key in developing management strategies to analyze communities and what surrounds them—including natural fire breaks, like highways, railroads and rivers—in order to effectively reduce fire risks.

Historically, firefighting decisions have been based on the intuition and experiential knowledge of fire managers. Dunn said this is part of firefighting culture, but results in a lack of information to the public. In contrast, Dunn’s technology allows for a new decision support framework that is more analytically driven, and strives to make this information available to communities and organizations so the public can understand how firefighters are engaging with the fires that threaten their towns.

John Bailey, a professor of silviculture and fire management in the OSU College of Forestry, is Dunn’s supervisor. Bailey said Dunn’s work is “on the cutting edge” of fire management research in the United States and beyond. Dunn himself said he hopes to eventually take the technology internationally.

“It is directly applicable to the challenges that we’ll face as a state, and it brings recognition to the state, OSU and the College of Forestry, in addition to Chris, personally,” Bailey said via email.

After graduating with a Bachelor of Science in forest management at Colorado State University, Dunn worked as a firefighter in southwest Oregon. After seven years, he decided to apply his firefighting experience to graduate education and research. He received a M.S. in forest resources and a Ph.D in forest resources from OSU before becoming a research associate.

“Having that experience on the ground helps identify what needs to be incorporated into [the technology] to be relevant, and most importantly, it helps me communicate when I’m out at these workshops talking to firefighters,” Dunn said.

Dunn’s technology pinpoints where fires can have good benefits—such as regenerating the forest and the species that prefer open ecosystems and conditions—and where fires can have negative benefits—burning homes and critical habitats, for example. Using this information, fire managers can decide whether to aggressively hit a fire or leverage it to get risk reduction and other positive benefits.

“Fundamentally, fire is a natural process, so it’s been part of our ecosystems for a long time. There’s a natural role that fire plays,” Dunn said. “But, probably more importantly in this context, is that fire itself is a good stopper of other fires, so you can get a lot of reduction benefits.”

Now that the technology is developed, Dunn said much of his efforts will be focused on implementation, education and outreach to local communities. Dunn hosts workshops and works with various collaborative groups throughout the state to integrate local knowledge with his data analytics and build the capacity to deal with large fires prior to their occurrence.

The OSU College of Forestry is also launching a new Wildland Fire Extension program later this year, which will place regional fire specialists in six regions around the state. These specialists will do groundwork in communities, including community wildfire protection plans, fire education, adapting homes and implementing Dunn’s technology.

“Chris and I are working hard to get out the message that these modeling and planning approaches are doable and meaningful, and the easiest way to adapt to climate change and future wildfires,” Bailey said via email.

“We’re experiencing fire today that’s different than the fire that was used to develop models 20 years ago,” Johnson said. “We’ve never had to deal with winds of 90 miles an hour or fuel that’s as dry as it’s become with climate change in more recent years, and ember showers that are like a blizzard—it’s not snow, it’s little burning embers that are flying through the air at 50 miles an hour—and spot fires.”

While the digital tools will help mitigate and manage fire, Dunn said it is also imperative that we take larger steps to address climate change.

“This is really climate-driven, fuel-driven, and we’re two decades into that. It’s high time that we accept that this is the new norm today—that despite throwing more and more money at the problem as we do, and continuing the efforts that we’ve always done, we’re not gaining any ground,” Dunn said. “The reality is large fires are going to be here to stay, now and in the future.”