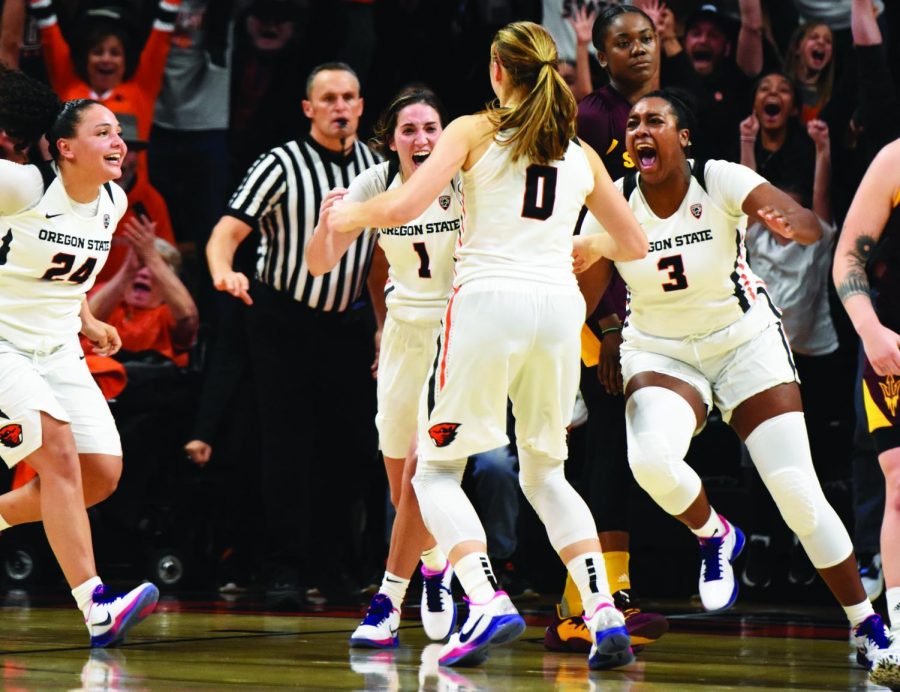 OSU teammates—junior guard Destiny Slocum (#24), junior guard Aleah Goodman (#1), senior guard Mikayla Pivec (#0), and senior guard/forward Madison Washington (#3)—run towards each other in celebration after Pivec shoots a buzzer-beater to win the game against ASU at Gill Coliseum, Friday, Feb. 7, 2020. After trailing by more than 10 points in the second quarter, OSU made an incredible comeback during the second half of the game.

Over 5,700 people in attendance erupted in roars and cheers when the shot was made.

The buzzer beater shot, made by Oregon State senior guard Mikayla Pivec, came from an inbounds play with 0.4 seconds left in regulation play and took several bounces on the rim while the crowd held its breath, waiting for it to fall through the net.

On Jan. 12, the Arizona State Sun Devils Women’s Basketball team upset the Oregon State Beavers, ranked No. 3 in the nation at the time, in Tempe, Ariz. by a score of 55-47. With revenge on their minds, the No. 9 Beavers bested the No. 19 Sun Devils during the rematch in Corvallis, Ore. on Feb. 7 by a score of 64-62.

The victory was Oregon State’s first against Arizona State in a little under two years. The last time the Beavers defeated the Sun Devils was on Feb. 25, 2018 with a score of 64-60.

“It’s a nice feeling, it’s been way too long,” Pivec said. “It’s a great way to end the game with a lot of people down the stretch making big plays, and that’s the way it should be for us.”

OSU Head Coach Scott Rueck showed a tremendous amount of respect towards the Sun Devil team for the fight that they put up.

“They made us work for everything, so it took a big effort to beat them,” Rueck said. “That’s the thing about their team. They typically never beat themselves, you have to beat them. You got to give them a ton of credit for hitting huge shots, and also a ton of credit for executing, getting the stops that we needed, but most importantly scoring.”

During the first quarter of the game, OSU freshman forward Kennedy Brown suffered a knee injury and was unable to play for the rest of the game.

“It was hard to see Kennedy go down, we hope she’s okay, but this team rallied,” Rucek said. “It was something we’ve practiced.”

OSU junior guard Destiny Slocum gave praise to her teammate, junior guard Aleah Goodman, for keeping the Beavers in the game, even when they were down. Goodman made 14 points during the game, backed with four 3-pointers.

“I think we talked a lot about toughness. And that’s one thing. We weren’t gonna get out toughed this game, and we’re not gonna for the rest of the year. That’s our goal,” Slocum said. “Aleah was huge for us. She was tougher, she was hitting great shots, stepped up and gave us confidence for the rest of the game, and I think everyone really rode that, so she was huge when she went on that run.”

OSU senior guard Kat Tudor also gave praise to her teammate, senior forward Maddie Washington, for her pass that would help up to tie the game at 62 points a piece. The pass occured when the Beavers were down by two points with only two seconds left in the fourth-quarter.

“Maddie’s pass was literally perfect, that made the whole play. From the inbound to Maddie, to Maddie to me, they set it up,” Tudor said. “Everything that set that up just made the play.”

But ultimately in the end, Rueck said that this win wouldn’t be possible without the help of Beaver Nation.

“I can’t give enough credit for this team for the heart they showed, and for Beaver Nation for having our back like they always do,” Rueck said. “Tonight is a night that nobody will ever forget for lots of reasons.”

With players supporting each others’ successes in the game and Beaver Nation’s support for the team, the Beavers walked away from the win and beyond their post-game eight minute mingle with the feeling of family.

The Beavers faced the No. 12 Arizona Wildcats in Gill Coliseum on Jan. 9 in their annual Dam Cancer game. They will then travel south to face the Southern California Trojans and the UCLA Bruins.