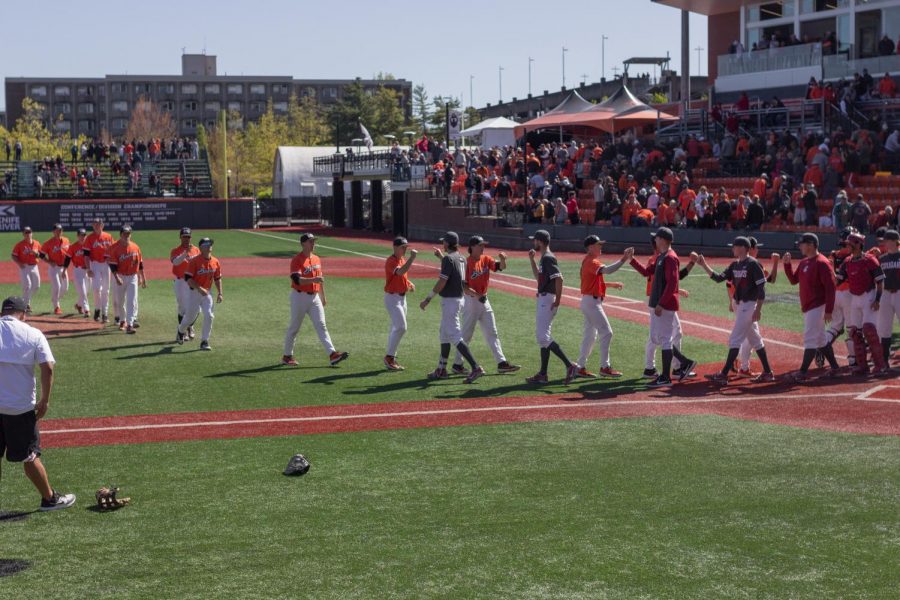 The Oregon State Baseball team is currently in Surprise, Ariz. to kick off their 2020 season and the Beavers clubhouse is full of optimism.

Two years after winning their third National Championship in Omaha, the Beavers begin their season ranked 25th in USA Today’s preseason Coaches Poll. They are also predicted to finish fifth in the PAC-12 by the conference’s coaches.

But that does not matter to the Beavers. The team’s goal in 2020 remains the same as it does every year.

“Our team goal is to win the National Championship. That’s what it is every year,” said junior infielder/outfielder Kyler McMahan. “We’re going to leave everything we have on the table every single game. There’s no doubt in my mind that we can do it.”

The Beavers previously finished third in the PAC-12 in 2019 with a season record of 36-20-1 and a conference record of 20-8. Since then, several of the team’s star players have been drafted by big league clubs, including first overall pick Adley Rutschman, who is working his way up the ladder as a catcher in the Baltimore Orioles organization.

Players will always come and go in college baseball, and McMahan expressed no worries about the departures of many of the team’s previous star players.

“Just because we don’t have Adley Rutschman doesn’t mean that we cannot get to Omaha, win Omaha and dominate for years to come,” McMahan said. “It is absolutely going to take every single player on the diamond, in the locker room and in the dugout – at some point they’re going to come up, and they’re going to need a shot. That’s what we’ve been working on this entire year, knowing your role and understanding that your role is significant and it’s going to be used to benefit us at some point.”

Another big change over the off-season was the addition of new head coach Mitch Canham, who was hired in June to replace interim head coach Pat Bailey. Canham, who previously enjoyed success over the last four years as a Minor League coach in the Seattle Mariners organization, is no stranger to Oregon State baseball.

The 34-year-old played for the Beavers from 2004-2007 and was a key player in the team’s first two National Championships. Canham’s arrival has been well-received by the team and McMahan said that his knowledge and leadership skills have created a positive atmosphere in the clubhouse.

“Mitch has been more than anybody could imagine,” McMahan said. “Just the way that he’s brought a family atmosphere into the entire team with camping trips and outdoor activities that we all do together to build that bond together. It’s been so great to work with him and have him as our head coach and lead us to what’s going to be a fantastic season.”

“My initial impressions of coach Canham are that he’s a great leader, he’s very positive and he’s working to continue the culture that has been established here, and the culture that he was responsible for establishing,” Burns said. “He’s done a great job with our family so far.”

While it is still too early to tell how the Beavers will fare over the course of the season, Burns said that win or lose, the team is going to play their best.

That goes into the culture that’s been established here,” Burns said. “We’re always driven to get better on a daily basis, and even when things are going not as we’d like that remains the main focus. I say the word culture all the time regarding Oregon State because that’s what has been established here, a winning mentality, a hard-working approach to every day. There really isn’t any deviation when we’re winning or when we’re losing. It’s the same standard at all times.”