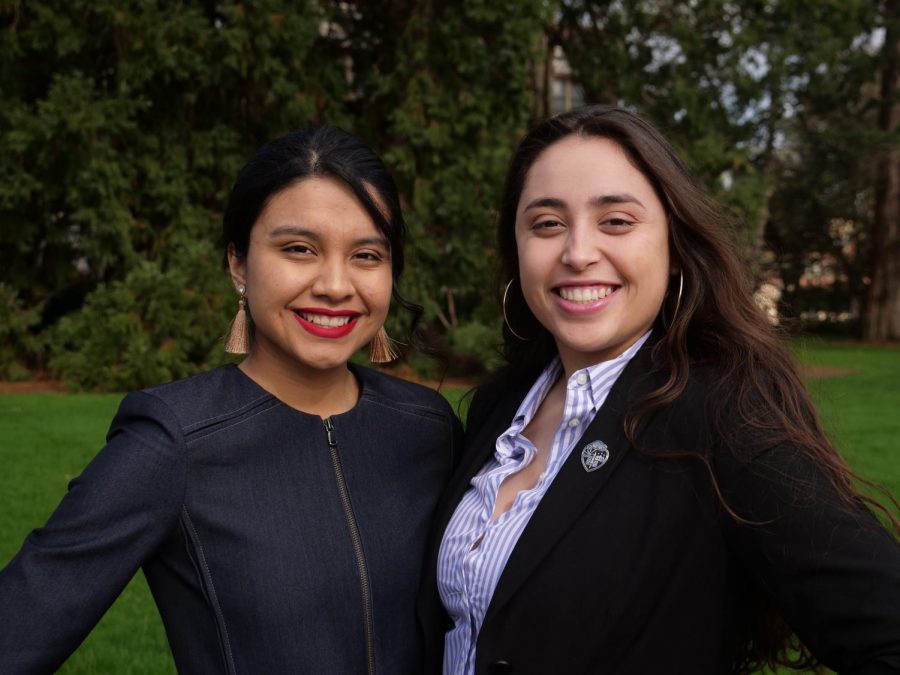 Vice President-elect Metzin Rodriguez, left, and Isabel Nuñez Pérez, president-elect, received the ASOSU 2020 Presidential Election results while standing outside of Rodriguez's class in Gilbert Hall. According to Rodriguez, the two screamed with excitement upon receiving the news.

Isabel Nuñez Pérez and Metzin Rodriguez have been elected President and Vice President, respectively, of the Associated Students of Oregon State University.

The results were released today, on Feb. 26, after initially being withheld, due to a now-dropped appeal request by the Hill-Fujimura ticket to avoid disqualification after being declared guilty of a campaign violation by the ASOSU Elections Committee.

Nuñez Pérez said she wanted the entire campaign team to learn the results of the election together.

“We were outside of Metzin’s class in Gilbert Hall, and then I facetimed the campaign team, and we all found out together when we texted Halli [Barrios] to call us when we were ready because she wanted to call us all together. Halli and Kylie [Boenisch] called us.”

Nuñez Pérez and Rodriguez said they were both excited to learn they’d been elected.

“Honestly, when we found it out it was so stressful because our hearts were pounding, you wanted to cry but you still want to know, when we found out we literally screamed a lot. We were literally in a building on campus, so a lot of people saw us screaming. We promise we’re good, we’re just very excited,” Rodriguez said.

Nuñez Pérez said she felt hopeful that having people of their identities in a leadership position will help underrepresented students feel more welcome at OSU.

“A lot of it has to do with just us being us in this position of leadership. The precedent that was set? This is huge as far as representation. We care about x, y and z, but we’re also the first dual Latina ticket to be president and vice president elect, and will get inaugurated, and that’s huge, especially for underrepresented students on this campus, and my hope is that it just keeps going up from there. Hopefully that will commence with the people who apply to work for us,”  Nuñez Pérez said. “Doing the outreach and getting the people that, like us, who didn’t think that they could do it in those spaces.”

Nuñez Pérez said during the campaign process, she struggled with self-doubt.

“For me personally, all of this is new to me, even public speaking and talking to a bunch of people at once. Even just the self doubt, the imposter syndrome, that hit hard. I’ve never felt that so immensely in my life. Not knowing if I should be doing this, not knowing if I can support Metzin,” Nuñez Pérez said. “Just being comfortable in taking up those spaces and learning how to navigate those spaces.”

During spring term, the incoming president and vice president will spend time shadowing and learning from the current administration.

Kylie Boenisch, current vice president of ASOSU, said that she had mixed feelings about leaving the vice-presidency.

“I think once inauguration rolls around, I will be feeling more bittersweet about things coming to an end. Until then, Rachel and I, and our wonderful team, will continue to work towards our collective goals. I am very proud of the work that we have done in ASOSU so far and am looking forward to seeing Isabel and Metzin spread their wings and continue to move ASOSU forward,” Boenisch said.

Nuñez Pérez gave special thanks to their election team, faculty advisors and supporters, as well as the Coalition of Graduate Employees, who she said funded their Feb. 14 meet and greet event.

Metzin expressed gratitude for their supporters.