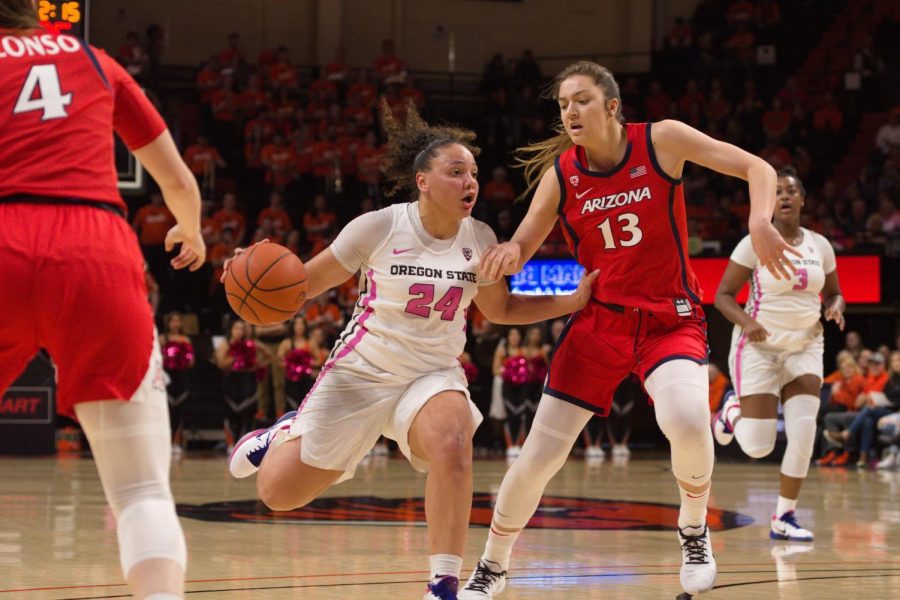 Two days after Oregon State senior guard Mikayla Pivec hit a buzzer beater against No. 19 Arizona State and now one month since Pivec hit a go ahead game winner against No. 12 Arizona, the Beavers Women’s Basketball team looked to replicate the result on Feb. 9 at Gill Coliseum.

The Wildcats were led by a strong defensive force and junior guard Aari McDonald who scored 22 points and suffocated the Beavers guards junior Aleah Goodman and redshirt junior Destiny Slocum. McDonald brought a knack of toughness, feeding off boos from the Beavers crowd and appeared to relish the opportunity to play the villain.

The game was close throughout the entirety, with spurts of points being tallied up by both until over time, when Arizona outscored OSU 9-2, pulling away and silencing the crowd at Gill.

With the win, Arizona boosted its national credibility and they now sit at 20-4 for the season and 8-4 in the PAC-12, taking over sole possession of fourth place in the conference standings. The Beavers fell to fifth and with 19-5 on the season and 7-5 in the PAC-12.

There were some setbacks to the game for the Beavers as Kennedy Brown, a 6-6 freshman forward who fell to the floor in the first quarter of the Arizona State game a few days before when closing out a player, watched the game from the bench. Her current status is unknown.

Brown’s absence left for a big role to be played by filled senior forward Madison Washington, who scored six points and grabbed a crucial 11 rebounds. Rueck kept Washington in for much of the game, keeping a smaller lineup to play with the speed of Arizona.

The Beavers may still rise in the national rankings after beating Arizona State and based on other outcomes in ranked games. But they will soon travel to historic Pauley Pavilion in Westwood to face No. 9 UCLA, who will most likely jump the Beavers in the AP rankings after beating No. 6 Stanford with a score of 79-69 on Friday, Feb. 7. The two teams will face off on Feb. 17.