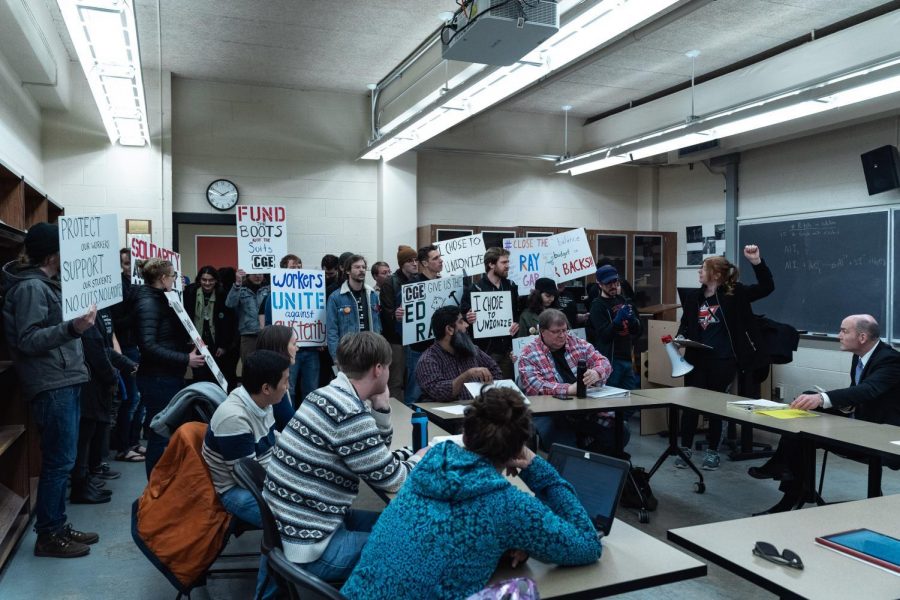 Andrea Haverkamp, an OSU employee, uses her fist to notify students attending Feser's class that it is time for them to leave, as Feser's class ended at 2:50 p.m.

A group of graduate employees and students interrupted Provost and Executive Vice President Edward Feser’s weekly lecture, demanding him to sign a petition.

Oregon State University graduate employees, students and Coalition of Graduate Employees representatives gathered outside of Rogers Hall at 1:30 p.m. on Feb. 19. With them, a petition featuring a list of demands for Feser to recognize. At 1:40 p.m., The group marched up the stairs single file to enter Rogers Hall, room 332.

They gathered around the classroom, signs in hand and voices loud, to present Feser with a petition for their request. Feser didn’t sign the petition after being confronted by the group of employees and students.

The petition Feser received calls for caps on salaries of OSU employees at $186,000, investment into affordable housing, and a freeze on tuition and fees. CGE also requested for guaranteed funding over the summer.

Alex Riccio is a staff organizer for CGE and helped put the surprise protest together.

“I think the point was to send a message, make the message very clear, communicating that it’s happening on behalf of 1,200 people including workers across this campus, and I feel like that message was successful,” Riccio said.

After taking a day to read the petition, Feser made his decision on whether to sign or not.

“I have reviewed the petition provided to me by graduate assistants while I was teaching my class Wednesday. I will not be signing that petition, and I ask that all members of the university community, including CGE members, abide by OSU’s time, place and manner policies, which importantly provides for free expression and protest opportunities at OSU, but calls upon those activities to not disrupt the important teaching, research and study occurring at the university,” Feser said via email.

According to Steve Clark, vice president of University Relations and Marketing, the university is aware of the protest in Feser’s class and the petition going around campus.

During the protest, OSU employee Andrea Haverkamp was the protester speaking directly to Feser on the demands of the petition.

“I feel like OSU administration continually and systematically disregards, disrespects and ignores members of the community, their own employees and the responsibility to the public good,” Haverkamp said.

Clark said OSU works very hard to provide fairness and equity for all of its employees, the university remains in active conversations with CGE and has been for years.

“I do expect this bargaining will produce a good agreement that acknowledges and builds on the excellent provisions the university already provides graduate teaching and research assistants,”  Feser said via email.

Riccio warned participants in the protest that any students present could face repercussions by supporting the event. Event-goers could receive a misconduct letter for violating OSU’s time, place and manner rules by protesting within a classroom.

“Will there be moral repercussions? No, I can sleep well knowing I have done my best to build a just, peaceful and equitable world. Will there be university backlash? Almost guarantee if you try to speak about these issues, they will ignore you through their official channels. If you talk through unofficial channels, they will absolutely punish you and not speak to you,” Haverkamp said.

According to Clark, the university uses policies regarding free speech to avoid classrooms and labs from getting disturbed. “The first effort would not be to punish someone but to inform them of how they can engage in appropriate free speech,” Clark said.

OSU and members of CGE will continue to have bargaining meetings for the coming months.

While ongoing meetings continue, employees’ conditions will continue on as they have in previous years.

“It is not enough to raise wages, we must chop from the top and lower the wages of those who are greedily consuming the financial resources of this institution,” Haverkamp said. “Oregon State University is flushed with cash and financial rich, but morally, spiritually and ethically they are bankrupt.”

Graduate employees will continue to work with CGE until the demands of the petition are addressed by the OSU administration.