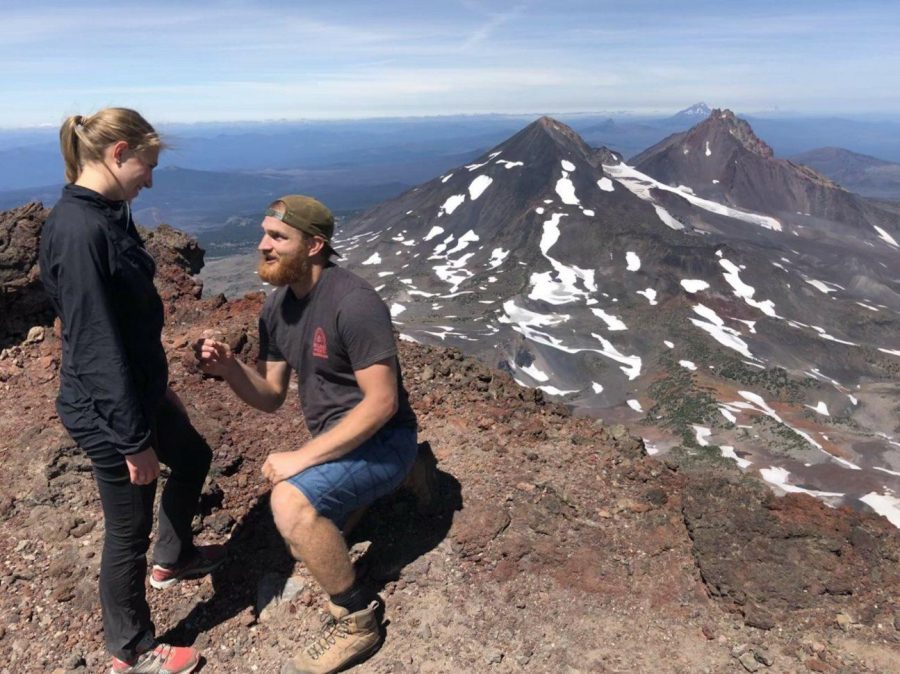 Brian Engdahl proposes to Katelyn Ohlrich. The couple has been together since Valentine’s Day in 2013 when the two were student-athletes together at OSU. The pair hiked to the summit of South Sister Mountain in Bend, Ore. with a group of friends before Engdahl surprised Ohlrich with the engagement.

Katelyn Ohlrich has not accomplished what she has by taking the easy route. Whether in the classroom, balance beam or now in her professional career, Olrich’s journey has been defined by her determination and persistent work ethic.

From an early age, the makings of Ohlrich’s persistence began to show itself through sports and through her studies. Alongside graduating high school with a 4.0 grade point average, the student-athlete made her mark in gymnastics by qualifying for the Junior Olympic Nationals three times as a prep athlete and winning a state title in bars, beam, floor, vault and all-around in the 2011 Oregon State Championships.

When it came time to take the next step into college, Ohlrich picked up where she left off in high school as a student-athlete. Born in Bend, Ore., she decided to stay local and enroll at Oregon State University in Corvallis. As a student, Ohlrich pursued a degree in mechanical engineering and earned three PAC-12 All-Academic Second Team honors in her four years as a Beaver.

As an athlete, Ohlrich competed in 34 meets and earned the respect of the Beavers’ assistant gymnastics coach Brian Amato along the way, who commended the work ethic that had got her to Oregon State to begin with.

“She worked harder than anyone I think we have had in the last few years,” Amato said. “She was determined. Worked hard, always had a good attitude, always had a smile on her face.”

Having graduated from Oregon State in 2015, Ohlrich has not let up on her work ethic. She now lives and works in Portland, Ore. as an engineer for Daimler Trucks North America, and is recently engaged with plans to get married in August 2021.

Brian Engdahl has known what he’s wanted to do with his life since he was 16, and much like Ohlrich, he never took the easy way out on his journey there.

That journey began years ago in Engdahl’s hometown of Livermore, Calif., where he attended Granada High School and found success as a wrestler in his early student-athlete career.

Engdahl started on the wrestling team in his final three years in high school, but had been a part of the team since his freshman year, and lettered as a wrestler in all four years. In his junior and senior years though, his high school accolades began to show as his work ethic continued to impress. In his final two years in high school, he won team MVP twice, qualified for state twice, and was a North Coast Section Champion during his senior year in 2010.

“Brian, like Kate [Ohlrich], is a very good person [and] really hard-working,” Amato said. “He worked hard and took advantage of his opportunities.”

Now having graduated and obtaining two degrees, Engdahl is looking to use that opportunity to achieve his years long dream of opening up his own brewery. While taking the time to chase his dream, Engdahl has also found the time to get engaged. He will be planning on getting married in August 2021, to Katelyn Ohlrich.

The two former student-athletes took similar paths to get to Oregon State, where those paths crossed and remained joined at the hip seven years later. The two hard-working, successful Beaver athletes will be taking the next step of their lives together.

Given their similar backgrounds and mindsets, the relationship between Ohlrich and Engdahl felt obvious. But despite their friends and teammates seeing their connection, the recently engaged couple remained friends and did not consider dating for a long time, until a push from The Daily Barometer nudged them in the direction they find themselves now.

In 2013, Engdahl and Ohlrich were voted by their teammates in a Valentine’s Day issue of The Daily Barometer as two people that should “stop talking and start dating,”  which both members acknowledge as the official beginning to their eventual relationship.

“It’s kind of a funny story we tell all the time,” Engdahl said. “Our anniversary of dating is on Valentine’s Day. Which is super cliche, and everybody makes fun of us for it. We both tell the story of how we saw it in the paper and we were just like ‘Why aren’t we dating? Why are we just talking?’ And that day we just said we were dating and we went to dinner.”

If not for their involvement in the newspaper, Ohlrich and Engdahl may never have taken the step in their relationship from friends to romance. For as much as she enjoyed her friendship with him, Ohlrich recalls not ever thinking about Engdahl and the time they spent together romantically until their names came up in the Barometer.

“It was a lot of group hang out sessions where we became friends first and then he slowly started asking me out to ice cream or sushi or different things,” Ohlrich said about her early friendship with Engdahl. “I was very naive to begin with, I thought he wanted to be closer friends… and so I didn’t hang out with him as much. I was like ‘Oh he wants to get to know me better that’s cool’… we were both kind of nervous about making it [our relationship] official until that article came out on Valentine’s Day.”

Now, seven years later, Ohlrich and Engdahl are still together. The two have been in each other’s lives as they have continued to see their hard work pay off as their dreams start to take shape. For the former wrestler, those dreams have taken the form of his own brewery, which he’s currently working on building from the ground up.

Engdahl’s degrees were earned with that goal in mind, and his previous work experience working at Widmer Brothers Brewery and helping start another brewery in Portland has helped him get to the point where he’s ready to take the step to start a brewery on his own.

The work of starting his business, which he describes as “fun, exciting and stressful” is done with a great deal of passion on Engdahl’s part. For as tough as it is, he’s excited to begin his new adventure and believes his status as a former athlete will help him with this new chapter.

“Something that I learned in a leadership way from athletics is people really don’t follow you if you’re not willing to show that you will do the work with them,” Engdahl said. “Anybody that I hire will know that I got down and dirty and I built this thing from the ground up.”

Ohlrich is no stranger to leadership herself, being a team captain on the Oregon State gymnastics team in her junior and senior seasons. And like Engdahl, she is using her experience in athletics and leadership to propel her career, joining an accelerated leadership program through Daimler Trucks.

“Having that experience [athletics], as well as knowing how to work on a team, really helped set me up for this role,” Ohlrich said. “The idea is when I get out of this 18-month program I’ll go in as a technical manager, which at my age would be pretty young.”

Both Engdahl and Ohlrich credit athletics in part for their career success, while also giving credit to sports for the success of their relationship. Ohlrich talks about how sports, and gymnastics and wrestling in particular, helped the two athletes understand each other a little bit better.

“We’ve talked about this a lot, I don’t think our relationship would have worked very well in college if we weren’t both athletes,” Ohlrich said. “Gymnastics and wrestling are very similar in the sense that as you’re growing up, before you get to college, they’re very individual sports… The spotlight’s kind of on you. If you mess up, people can tell that you messed up. So I think we bonded a lot over that when we either succeeded or failed, we could understand each other’s emotions.”

For as hard as they have worked at each stop in their lives, Ohlrich and Engdahl’s relationship has been made easier due to their status as student-athletes. And with their paths crossing back in their college days, all it took is a little push from the Barometer to link their lives forever.