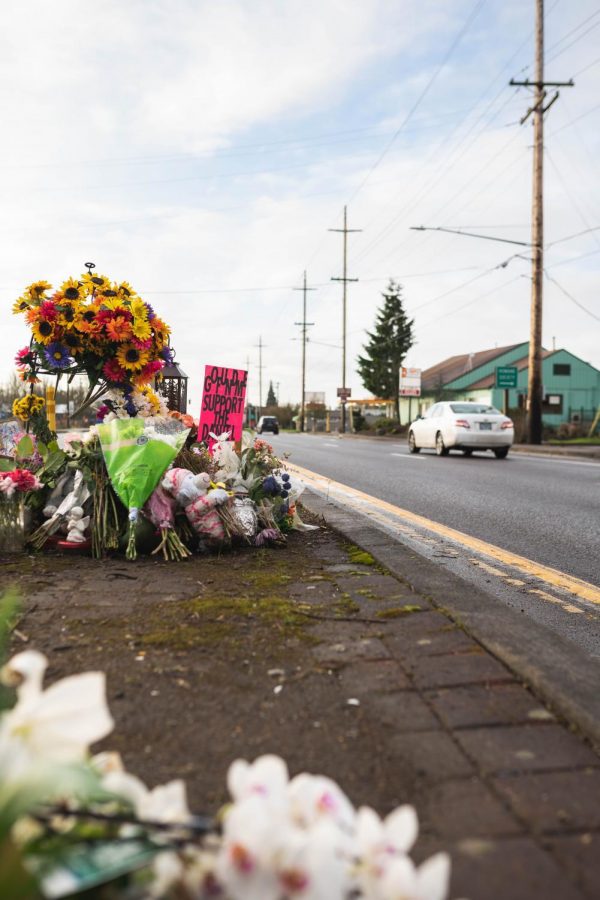 Flowers left at the memorial to an 11-year-old girl at a crosswalk on Highway 99/Third Street in early January. This death, as well as others in the Corvallis area in the past 18 months, have prompted community members to call on the city government and the state of Oregon to improve crosswalk safety among other improvements.

Rebecka Weinsteiger, a Corvallis resident and community activist, says she will not drive to work until the speed limit is lowered on the stretch of Highway 99/Third Street in south Corvallis where an 11-year-old girl was fatally hit earlier this month.

Weinsteiger was one of the first motorists to witness the aftermath of the accident.

“How do we make these crosswalks safer for everybody? It’s more than putting in a traffic light or even improving the crosswalk—we have to do broad change on the built environment,” Weinsteiger said.

Weinsteiger is not the only community member to express a desire for change. A protest was held on Jan. 10 to bring visibility to the issue.

The City of Corvallis and ODOT the are currently working on solutions to improve safety at the crossings.

Electronic reader board signs were placed on the south ramp of the highway by ODOT to alert drivers to slow down for the upcoming crossings, according to city Public Information Officer Patrick Rollens.

“Ultimately, they are temporary but I expect them to stay until we get some of these initial improvements done,” Rollens said.

Cloudy Rockwell, who took part in the protest and is a resident of Corvallis, said she has noticed drivers slowing down after the signs.

City Parks and Recreation staff also removed vegetation from the pedestrian center islands, according to Rollens.

“That was one of the quick projects we identified as a way to improve visibility,” Rollens said.

Flashing radar speed signs have been implemented on the highway, and the city is looking for ways to make them permanent, Rollens added.

According to Angela Beers Seydel, the public information officer for ODOT, new beacons are being installed at the crossing where the Jan. 8 accident took place. Three new beacons will also be implemented further down south of Hwy. 99. ODOT and the state of Oregon will be handling the cost of putting in the new lighting signals.

“We want to get everyone’s input on what they think,” Beers Seydel said. “We are going to start the south corridor study spring/summer this year, that’s going to look at a variety of ways to improve pedestrian and bicycle experience in the corridor.”

According to Beers Seydel, concerned residents can give feedback on Hwy. 99 crosswalks by contacting James Feldmann, who is organizing ODOT’s corridor study.

Mayor Biff Traber and the Corvallis City Council discussed setting aside one percent of the annual Transportation Maintenance Fee revenue to go towards more safety projects at last week’s City Council meeting. According to Rollens, if passed, around 30,000 dollars would be authorized. A vote is likely to be held at the next council meeting on Monday, Feb. 3.

At the meeting where redirecting funds was discussed, more than 20 red-shirted community members expressed their concerns and ideas for what the city should do regarding the crosswalk where the accident took place. The red color was a representation of the blood of Corvallis youth killed in traffic accidents.

According to Weinsteiger, talks at the meeting suggest using a HAWK red light crossing system could be viable. This would allow a pedestrian to activate a light at a crosswalk that would turn red for drivers, allowing pedestrians to cross safely.

Weinsteiger believes the highway should be designated as an urban safety corridor.

Readers can submit their own thoughts to the City of Corvallis Public Input Form, which allows community members to share their thoughts on crosswalk safety or any other topic appearing on a City Council meeting agenda.