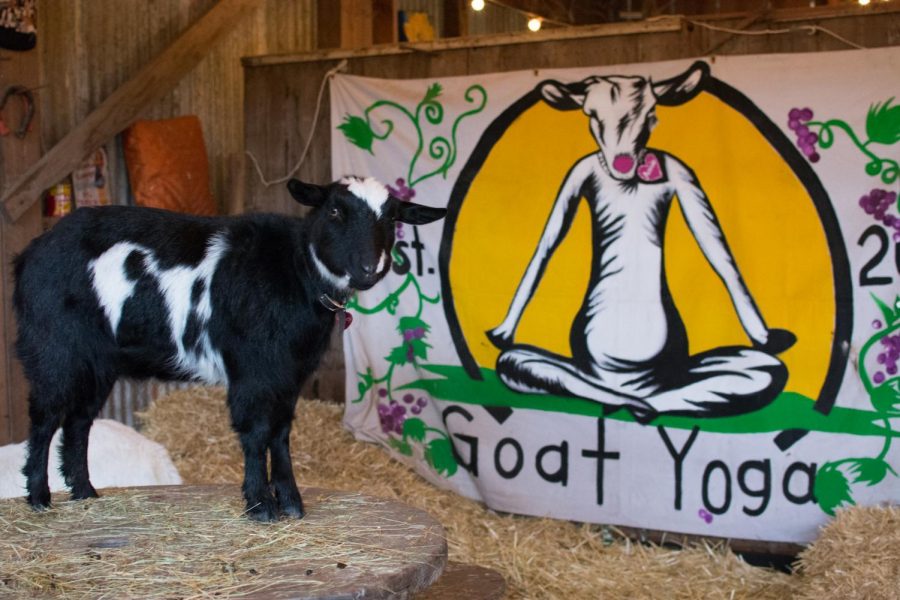 A goat stands next to a Goat Yoga banner.

OSU students voted Original Goat Yoga their No. 1 choice for recreational activities, after the company left an imprint on Corvallis culture.

Morse now has over 12 Original Goat Yoga locations and four premium farms across the country, which are affiliate locations for private events such as Corporate Health & Wellness, birthdays or bachelorette parties. The first location was one of these uncertified locations in Carlisle, Pa. Morse said, “My Carlisle Location was the very first satellite location for Original Goat Yoga and they are certified for holding goat yoga events. This just means they have been vetted to be sure they aren’t slaughtering their goats.”

According to Morse, the idea for Goat Yoga originally started out as Goat Happy Hour, a way to show how therapeutic it can be to spend time with the goats.

“I started inviting people over that I knew needed it and it became really popular,” Morse said in an email statement. “One of the people that came to the farm was a yoga instructor, Heather Davis, and she asked if she could have a yoga class in my field. I told her that would be fun, but the goats would be all over the humans! We laughed and agreed to hold a class!”

Classes are organized, scheduled and contracted with the help of OSU alumnus, Josh Fritchey, who met Morse over 10 years ago and started working at Goat Yoga in April of 2019.

“My leap to Original Goat Yoga was quick and unexpected,” said Fritchey, event coordinator at Original Goat Yoga, who met Morse while he was a barista at the Corvallis Dutch Bros. “I hadn’t seen Lainey in quite some time, but a text came through on my phone one morning that, in summary, read ‘I don’t know what you’re doing these days for work or if you’re happy, but I really need your help,’  Lainey’s timing couldn’t have been better.”

Soon after, he was fully immersed with the company and said he began to love all of the aspects of Goat Yoga.

“My favorite part of my job is literally witnessing someone’s frown turn upside-down… I get to sell happiness and I can’t think of a more rewarding product to represent,” Fritchey said.

Although the location in Corvallis was shut down due to zoning issues, they are looking for another location in the city that will accomodate Benton County health rules. Until then, there is a location in Oregon City, about an hour and 12-minute train ride from Albany, Ore.

This location opened up after current co-manager Melanie Hiestand went to a class in Corvallis and asked Morse if she was interested in opening a location in Portland.

After going to a class reccommended by a co-worker, Hiestand began getting involved in Original Goat Yoga, which she said was fueled by her previous love for animals.

According to Hiestand, sharing the goats with others and making people smile are the best parts of her job.

“I help care for the goats and make sure the yoga space is ready for class [and] I help promote our location by going to local bazaars, and farmers markets,” Hiestand said.

The classes are run like any typical yoga class, with the addition of a group of goats roaming the practicing space. These spaces can range from being barns, farm fields, or in urban settings, all with the same experience.

At the particular location in Oregon City, the classes are held on a farm that is also a horse-boarding facility called Beaver Lake Stables, according to Hiestand. Not only are there goats, but the classes will often be visited by chickens, alpacas and pigs.

“So, it is an environment where there is lots of animal love to go around,” Hiestand said. “It’s a space that most people don’t get to experience on a regular basis, so it’s a really nice escape from the hustle and bustle of life for a little while.”

Located right off campus, High Priestess is a local piercing and tattoo shop home to professional tattoo artists and piercers, offering their services at a walk-in basis.

High Priestess is off of Northwest Monroe Avenue and is open Sunday-Thursday from 12-8 p.m., or 12-9 p.m. on the weekends. This is the concept: walk into the store, choose the jewelry you’d like from the front display case and the pricing is based on the jewelry you pick.

“We make people look pretty good I would say,” said Dylan Smith, a piercer at High Priestess. “We do a lot of piercings here and a lot of first-time tattoos for a lot of people… the majority of people are [in] the younger crowd, with the occasional locals.”

Piercings can range from the typical earlobe to cartilage, lip and navel piercings as well. The shop offers after-care options to prevent any infections.

“I think the best part of the job for me is helping people out when they’ve had poor experiences at other locations… so it’s always really nice to help people out and calm people down… and helping them feel comfortable in their own bodies is really rewarding for me,” Smith said.

For tattoos, there is a shop minimum of $60, being the minimum price a tattoo will cost, unless it is on the hands, feet, or above the neck.

The artists are independent from the studio and spend their downtime working on designs for other clients, all of which are priced dependending on the size and intricacy of the design. A deposit is put down when making an appointment to insure the time that each artist is booking per client.

Mitchell, who has been tattooing for two and a half years said he most commonly tattoos script designs, or artwork revolving around nature.

High Priestess’ online website offers different informational blogs on the preparation for first-time piercings and tattoos, with guidelines on what to do before, day-of, and after the piercing or tattoo.

After it first opened in 1995 with owner Joey Taylor, Sacred Art Tattoo on Monroe Avenue has grown to be one of the most popular tattoo shops in Corvallis.

Including Taylor, there are only four tattoo artists who work out of the shop, creating their take on traditional American-style tattoos along with creating custom designs per clients request.

“I’ve tattooed everything from criminals, to judges, to grad students,” Taylor said. “Skulls and roses are really popular, there’s some things that never really change.”

Being walking distance from campus, most of the clientele are college students, changing each year as there is a rotation of new freshman moving to Corvallis. In the past 24 years, the styles have changed as far as how clients are asking for their tattoos to be designed, according to Taylor.

The shop is one open room with tattoo flashes all along the walls and two different stations where they have a steady turnout of people getting tattoos. There is a $40 cash deposit to make an appointment and a $60 shop limit.

“We try to do our best with giving the customer what they want… I try to be as versatile as I can so you don’t pigeonhole yourself into one thing,” said Taylor.

Sacred Art has its own social media accounts that are updating the tattoos they design, along with specials for the holidays.

Taylor describes the environment of the shop as organized chaos, based on the sometimes fast-paced nature when groups of people enter the shop.

According to Taylor, ultimately, “we try to treat people how they would want to be treated, we want to make them want to come back.”