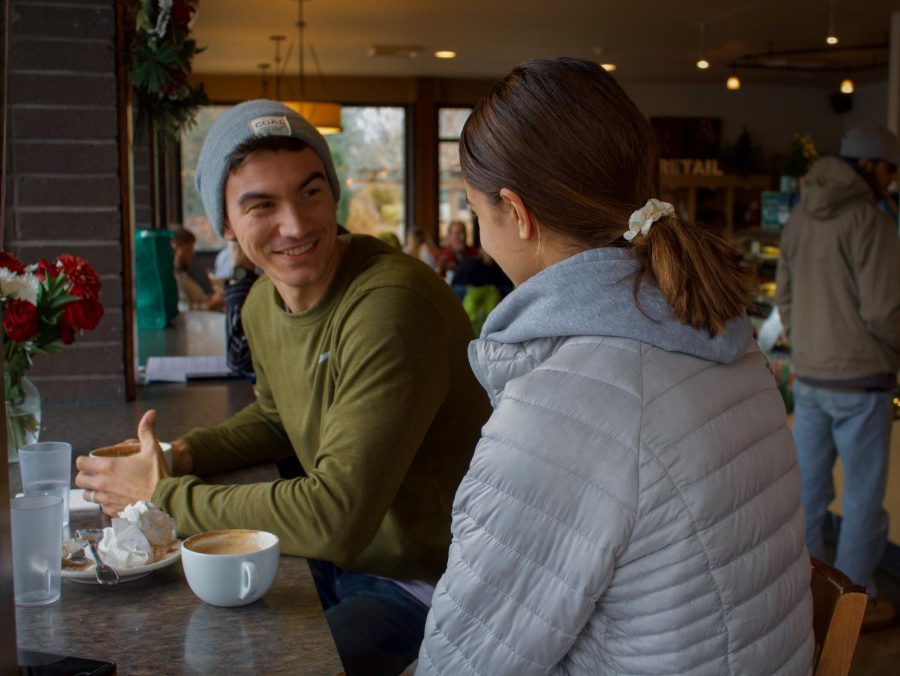 Corvallis coffee shops work to create a warm atmosphere and a sense of belonging, bringing students and the community together. For this year’s “Best of Coffee: off campus” selection, Dutch Bros. was named number one.

Dutch Bros, originally founded in 1992 by Dane and Travis Boersma, has been serving the Corvallis community since 2002. Today, Dutch Bros. has six locations across Corvallis, including their Southwest 26th street location on the Oregon State University campus across from Reser Stadium.

“I’ve worked at this location for six months, but my parents are the owners so I’ve been a part of the business my whole life,” Lengwin said via email. “Based on what I’ve seen, it brings people together and it gives everyone a safe space to talk.”

Hailey Escobar, a third-year student at OSU and a broista at the ninth street location, has worked at Dutch Bros. for three years, and was first hired as a senior in high school. She is also one of the trainers for the Corvallis Dutch Bros. franchise.

“I have built some pretty amazing relationships outside of the stand with some regulars, going as far as inviting them to dinner with co-workers at the stand and getting invited to weddings,” Escobar said via email. “Many of our customers care about us like we’re family, and the feeling is mutual.”

Lengwin expressed a similar sentiment as an employee at Dutch Bros.

“What’s fun about this job is that when you’re working it doesn’t really feel like a job,” Lengwin said via email. “It’s just having fun, talking to and getting to know people, and making people’s days better, including your own.”

Noah Hyatt, a third-year student at OSU, started working at the 53rd Street Dutch Bros. almost a year and a half ago. Like Escobar and Lengwin, Hyatt said one of his favorite parts of working at Dutch is the impact the company has on the Corvallis community and OSU students.

“My favorite thing about it is just the connection we get to make with customers,” Hyatt said via email. “We have the chance to completely make someone’s day better, and if I can, I will.”

Sadie Vanhoff, the assistant manager at the Dutch Bros.’s 53rd Street location, said her favorite part of the job is the opportunity to have a positive impact on someone’s day, along with the sense of community Dutch Bros. provides.

“Nothing beats a good cup of coffee served by even better employees,” Vanhoff said via email.

In response to being chosen as a “Best of Coffee” selection, Hyatt said he feels fortunate since it represents the community that Dutch Bros. strives for.

“It’s not only about the coffee, but it’s also about the culture we represent,” Hyatt said via email.

Likewise, Escobar expressed gratitude for the connections made with the OSU and Corvallis community.

“Being selected as ‘Best of Coffee’ really reminds me that the work and effort we put into each interaction, drink and conversation is appreciated by our community,” Escobar said via email. “Without our relationship within our community and with our customers, we really have nothing to work for.”

The chatter among customers, the whirl of the espresso machine, the taste of warm, fresh pastries and the smell of rich coffee beans. This year, Coffee Culture was selected by the Corvallis community as one of the “best of coffee” locations in town.

Coffee Culture first opened in 1993, and will celebrate its 27th anniversary in the community in March. Currently, there are four locations in Corvallis⁠—a downtown location, an annex on ninth street, a location on Northwest Kings and a location in the Timberhill Shopping Center⁠—in addition to one roasting location.

Owner Lisa Tostberg said her mission is to serve the highest quality coffee while providing exceptional customer service, along with a belief that handcrafted and individual attention to every drink is important to their customers.

“Our ongoing effort to be the best of coffee in Corvallis is an honor we do not take lightly” Tostberg said via email. “Every day we are looking for new ways to improve the quality of our products and thereby the interaction with our customers.”

“Our mission attracts people who love coffee, who love that attention to detail, the perfect shot and that silky milk with every pour,” Tostberg said via email.

As a “Best of Coffee” selection last year, Tostberg said Coffee Culture is proud and excited to receive the recognition again.

“We work very hard to maintain this honor through ongoing education for our staff, to sourcing the highest quality coffees, to small-batch roasting, and individual care for every cup,” Tostberg said via email.

In the heart of downtown Corvallis, among boutiques and breweries and restaurants, Tried and True Coffee Company serves up fresh coffee and pastries in their small and cozy shop. Minutes down the street is their larger Southtown location, where Tried and True serves the same coffee and treats, in addition to beer and wine and a patio space for live music and events. The company lives up to a simple creed: “We’re in the people business, we just happen to serve coffee.”

Ann Schneider, the owner of Tried and True Coffee, said one of the goals of the company has always been to foster community within Corvallis.

“Our goal has always been to offer the best coffee we’re capable of in a welcoming, safe and clean environment,” Schneider said via email. “I’d like to think that many students have found their home at our shop over the years and have really been able to take ownership of our shops.”

Tried and True Coffee has also strived to support their fellow local small businesses, which means their goods come from other Oregon-based companies. Their website emphasizes the importance of interactions and relationships to the company’s mission.

In response to being named one of the “Best of Coffee” selections, Schneider said it is an honor to feel the love from Oregon State University students, and that Tried and True Coffee appreciates everyone who have supported them over the years.