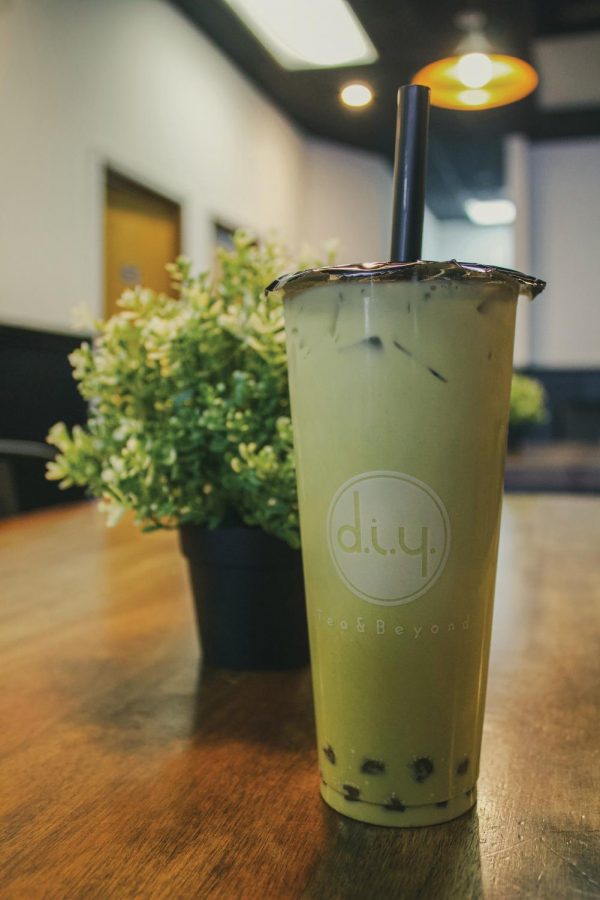 A boba tea from DIY Tea & Beyond sits on a table.

Located on 155 NW Kings Blvd., April’s Tea House has become a hotspot for bubble tea enthusiasts. Equipped with hot and iced teas as well as cakes and other pastries, lactose, sugar free and gluten free options are available for all dietary needs—an attribute for which April’s Tea House Manager and student Carly Slonecker, believes is the establishments recipe for success. Everything on the menu is very adaptable, Slonecker said, because April’s Tea always wants to provide something for everyone that is high-quality and freshly made.

According to Slonecker, from the many menu options offered at April’s Tea House, the Brown Sugar Boba and the classic milk tea are the most popular and made fresh to order. The sugar free options which are available for almost all April’s Tea beverages, specifically the Thai tea, which rarely comes with a sugar-free option elsewhere, is one particular service which Slonecker is very proud of.

Another defining element of April’s Tea House in regards to the menu, would be the translations option from English to Chinese, both in the shop and online. According to Slonecker, the owners of April’s Tea, who are Chinese themselves, felt inclined to offer a place with a menu and authentic Chinese products that offered a wide range of beverages with cultural ethnicity designed specifically for the large Chinese population on campus, many of whom live within the building which April’s is located.

As for the quality of the bubble tea itself, it’s “not too watery or too sweet,” said one OSU student and frequent customer of April’s Tea House, Leah Song. Beverages are always made fresh and have a way of making you feel relaxed, yet energized at the same time, according to Song, whose favorite April’s Tea offering is the Rose Oolong milk tea.

Everything is “very subtle but still tasty,” said student Daniel Ken, who has been a customer of April’s Tea Shop since the beginning of the 2019 school year. Small yet spacious, April’s is chill according to Ken, in regards to other hangout spots around town.

In fact, the environment at April’s Tea House has a way of remaining relaxed even with the constant traffic of customers, while still welcoming students with the soothing yet awakening scents of herbal and chai aromas which fill the atmosphere.

One of the first things costumers notice when walking into April’s Tea House, is the selection of board games and playing cards available to all paying customers—providing a relaxing yet thought-provoking activity for students looking to take breaks in between study sessions. Even though many customers are in and out once receiving their order—due to the smaller proximity of the shop—for those who choose to stay, whether for cram sessions or just a short break–are sure to be gratified.

With its quick and easy location, as well as quality food and beverages made fresh and individualized with customer satisfaction in mind and a thriving selection of bubble teas, April’s Tea House is an off-campus dwelling that aims to offer quantity as well as quality with every visit.

DIY Tea & Beyond, a tea and pastry shop, once located on 1849 NW 9th St in Corvallis, was voted by Oregon State University students as a favorite spot for Bubble tea lovers within Corvallis, Ore.

The now closed DIY, which was a five minute drive from campus, had an atmosphere throughout its spacious dwelling which was very laid-back and it’s “never too loud in here,” according to OSU student Kenzie Bienvenue, who was a frequent customer of the establishment.

According to Bienvenue, DIY was a great place for study groups to work because of its spacious nature and available resources such as a printer which is offered to all paying costumers.

“Coming here is good for studying because of the tea and the printer which saves students a lot of money. We all know that printing on campus can be really expensive but as long as you are a paying costumer at DIY, you can use the printer free of charge,” says Bievenue.

Bienvenue explained that the atmosphere at DIY was always upbeat and the vibes that she received from both employees and fellow costumers while visiting the shop were always warm and positive, with a good and safe ethnic-based environment.

OSU student and recurring customer of DIY Jessica Thompson said, “The atmosphere is always really bubbly.” Thompson, whose favorite DIY offering is the pineapple green tea, expressed her appreciation for the tapioca boba served with the bubble tea, which she said was never too squishy.

DIY appeared to be a “good place to do homework,” states student and frequent customer Kaelyn Vass.

With such resources that implement a tranquil atmosphere with an excellent studying space, including ample room—filled with corner couches and coffee tables—a printing service and endless beverages, DIY was designed to serve both the individual student as well as study groups looking for a place that offers success and relaxation.

When walking into Tarntip Thai Cuisine, peaceful vibes create a warming atmosphere, equipped with the scent of delightful curries and egg rolls, surrounded by quiet conversations between customers which offer a relaxing environment with bright yet simplistic art.

It doesn’t look as if they “over invested,” said Carita Larson, a Corvallis resident and customer of Tarntip Thai cuisine. Everything is very balanced and welcoming compared to other restaurants throughout the downtown Corvallis area, according to Larson.

Mark Larson, Carita’s husband agrees, however claims the location can be rather problematic, as they would be willing to visit more often if the parking situation was better. However, the Larsons don’t let such complication deter them from dining at Tarn Tip, as according to Mark, the establishment has good food quality, and truly represents authentic Thai cuisine.

The restaurant’s quaint environment is relaxing for those looking to escape the fast-paced city and the ever-moving university atmosphere. As for the bubble tea, which Tarntip is so well known for, the small but popular selections of bubble and regular chai beverages, along with Tarntip’s close proximity to campus, have proven rather satisfying as well as convenient for many campus students and employees looking for a quick and easy way to refresh their middle-of-the-day bubble tea cravings.