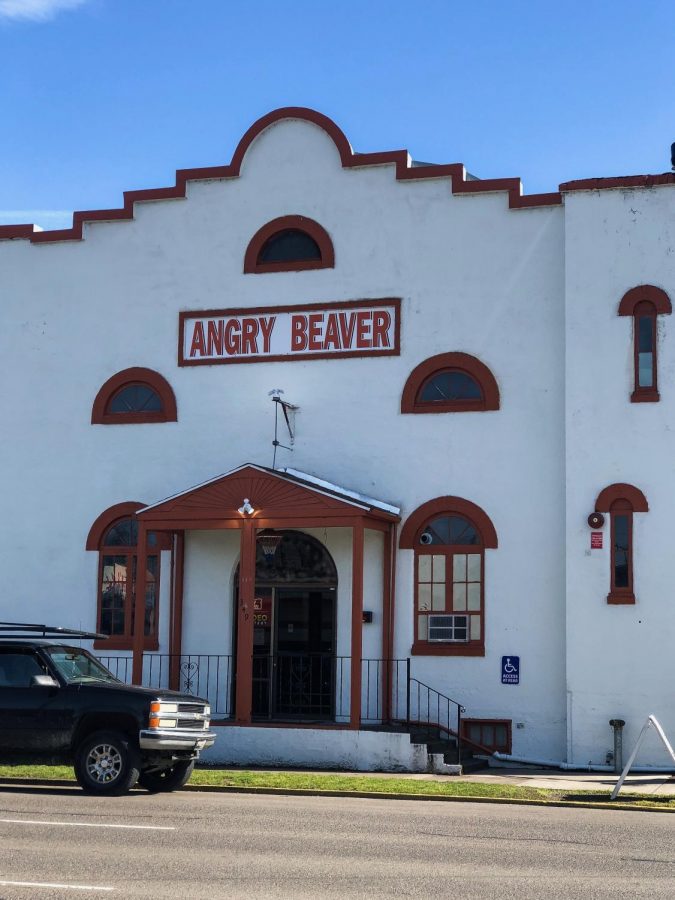 The Angry Beaver polled highest as the best live music venue in Corvallis. The Angry Beaver is a sports bar and grill founded by Randy Holmes, a former OSU football player. His former jersey, #31, is hung on a wall of the restaurant.

The location features a large open floor, many televisions, and is decorated with OSU football memorabilia.

Nikki Kelley, a bartender at the Angry Beaver, said, “I think it’s a good venue. We do a lot of fraternity and sorority parties here. We move tables out of the way to turn the floor into a dancefloor, so it can be a restaurant in the day and a dance-club at night. It’s a very versatile venue.”

Bartender and Server Rickey Jones said that he was “excited and glad,” about the Angry Beaver being listed in the live music poll. As for the type of music that the venue books, Jones said it’s common to see bands play classic rock, covers, and mellow music.

On Fridays, the Angry Beaver hosts a weekly event called the “Electric Beaver” from 10 p.m.-1 a.m., where local DJs play hip hop, R&B, throwbacks, pop and electronic music, according to a statement on their website.

Server Megan Guillot said it’s accurate that the Angry Beaver was voted best live music venue in Corvallis because there is a significant lack of places for students to socialize off campus.

Bombs Away regularly hosts local musical groups, as well as periodical open mic nights and open jazz sessions. They aim to provide a performance space for both independent and internationally-recognized musicians and performers.

Located right next to campus on 2527 NW Monroe Ave., Bombs Away serves Southwestern, Mexican and Cajun-style food as well as beer from local-microbreweries.

In a public statement on Bombs Away Cafe’s website, they said that they are “committed to supporting the best local music and visual arts.” Additionally, Bombs Away Cafe described themselves online as being,  “the valley’s premier music venue and a community staple since 1991.”

Interzone was also ranked among the top three best live music venues in Corvallis. During the day, Interzone is a coffee shop and cafe.

The wall decorations feature vintage dolls and art from the community.

“This place is an institution and it’s been around for a really long time. As someone who’s not originally from Corvallis, I think we’re always needing access to more live music, and so it’s cool that Interzone provides that and not just on Fridays and Saturdays, we try to do as much as we can during the week as well,” said Leah Biesack, employee at Interzone.  “I think we’ve got a really good variety that caters to a lot of different crowds.”

As to what sets Interzone apart from other venues or cafes in the area, Biesack compared Interzone to a time capsule.

“It’s a living breathing thing that hasn’t changed ever. It’s a time capsule, and that’s pretty special. Things are changing a lot lately, especially in Corvallis, and a lot of coffee shops are hopping on that train of trying to be really cool and chic Portland cafes. I like that we do our own thing and we’re adamantly against change. We add edge and character to a town that needs it, ”  Biesack said.

Local’s Live polled as being among the top three live music venues in Corvallis.

Local’s Live is a local audio-visual music show broadcast by KBVR-TV on channel 26. The artists perform for a live studio audience on the fourth floor of the Student Experience Center at OSU on Fridays at 6 p.m.

The broadcasting studio is free and open to the public. Videos of the broadcast can also be found on the Youtube channel for KBVR-TV and on the Orange Media Network website.

On being voted one of the top live music venues in Corvallis, Ore., Wayde Crawford, producer for Local’s Live, shared what he said he hopes the program will accomplish.

“Locals Live and all of its members take pride in giving local musicians a platform to display their art. Our goal is to support live performance bands and continue to be a great place to experience the Corvallis live music scene,” Crawford said in a statement via email.

Most of the bands that play are from the Pacific Northwest, but the broadcast welcomes all performers interested in being on Local’s Live to contact them.