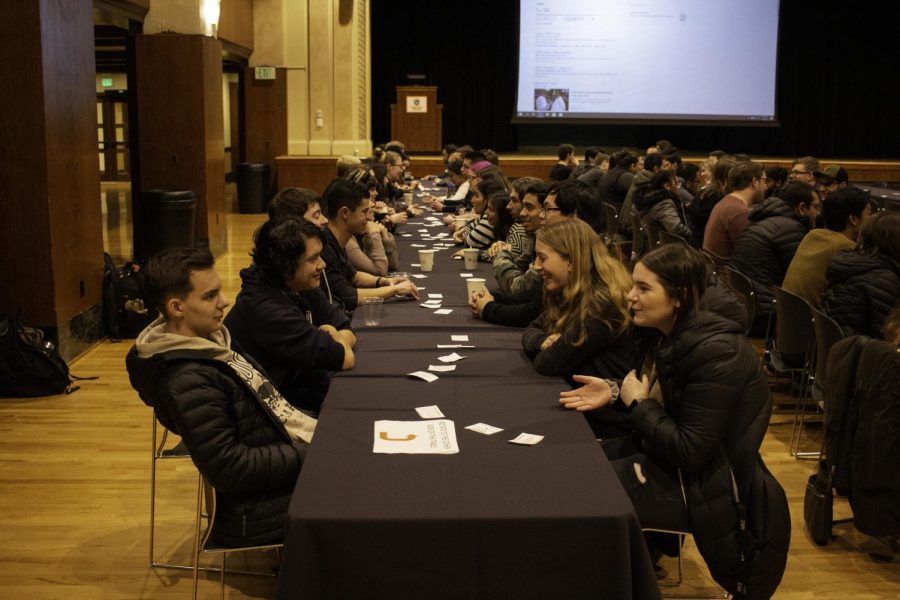 Students mingle with the peers in from of them, with limited time and on a quick rotation. This speed friending event occurs once every term.

Members of the OSU community gathered in the Memorial Union ballroom on Jan. 17 to take part in a mingling event, with the hopes of meeting new people and making friends.

Sitting in rows of tables, students had four minutes to get to know the person in front of them before the timer ran out. Once time was up, each student moved one seat to the right and proceed to introduce themselves to the next face in front of them.

After several rounds, students then had the chance to congregate, grab some food and drinks, reconnect with people they previously spoke with and play board games. Some students exchanged phone numbers with the hopes of meeting up again sometime again within the near future.

If the description above sounds exactly like speed dating, that’s because the event’s concept was nearly the same, with one major difference: it’s speed friending.

The event has been put on every term since fall of 2018 and has continued to build in popularity every time it has been held.

“Every term it kind of gets better,” said Active Minds Co-President Matthew Hochhaus. “[When] we get more people [to join], it’s more thought out, it’s just kind of better in general.”

One of the main reasons why speed friending has continued to grow may be due to the fact that in addition to drawing new participants, many of the previous participants have returned during the following terms.

“A lot of people come back,” said CAPS Mental Health Promotion Coordinator Tessie Webster-Henry. “We get a lot of positive information from our surveys that say people had a good time, they met new people, and that they would plan to return. Those are the kinds of things we ask about usually.”

Many of the students who attended the event seemed to enjoy their time, including mathematics student Sagar Trika, who said he was open to returning to the event in the future.

“Keep an open mind, keep an inquisitive mind,”Hochhaus said. “Sometimes when people go into these events they kind of get anxious and maybe their brain kind of freezes up and they don’t know what to say. My best suggestion would be to ask someone about anything.”

Hochhaus also gave advice for participants who had difficulty with finding conversation topics.

“If they say something in a sentence and there seems to be any substance to it, ask them about it. See what’s going on there,” Hochhaus said. “If you can’t think about that, ask them about their hobbies. What do you like to do for fun? What was your day like? Anything. Once you ask one of those questions the ball starts rolling from there”

While speed friending won’t return until next term, students looking to learn more about OSU’s Active Minds are welcome to attend one of their weekly meetings, which take place every Tuesday at 5 p.m. in Memorial Union room 215.