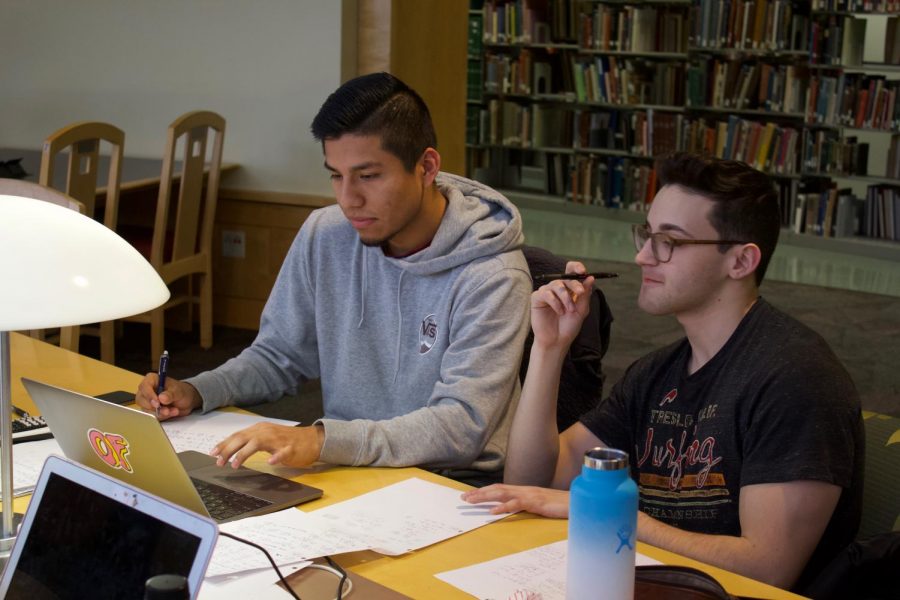 Juniors Juan Altamira and Sam Aragon study in the Valley Library Rotunda ahead of finals. Many students come to study here for the view and to study in between classes.

The Memorial Union tied for first place for the Best Of study spots on campus, voted on by OSU students and the Corvallis, Ore. community. The MU was opened over 90 years ago, built to honor the students who had fallen during World War One. Today, the MU is a hub on campus for countless communities, and hosts dozens of events throughout the school year.

The MU houses many different programs and offices such as the Veteran’s Lounge, Graduate Student Success Center, and of course, the MU commons. The MU is visited by many students and staff every day. Within the main dinery, MU Commons, you can find Panda Express, Togo’s Sandwiches and Joe’s Burgers. You can also find JavaStop and Bites located within the building as well.

The most infamous study space within the MU is the huge common area located at the front by the main entrance. The space is filled with vintage couches, antique chairs and tables, and a grand piano, the room reflects the building’s rich history.

“We both work at Moreland Hall, so the MU is really close to our offices,” Dawson said. “I often go to JavaStop first before sitting down.”

Givhan enjoys the space for a number of reasons.

“I like the natural light and the aesthetic,” Givhan says. “I like it better after finals weeks though, when it clears out again, I like sitting next to the windows.”

Both Givhan and Dawson agree the MU is a quiet, comfortable and unique place to study on campus.

The MU is also an infamous napping spot on campus because of its many long, soft couches and dimmed natural light. The Ballroom is among the many event spaces used frequently to host meetings and special occasions.

The library was another first-place winner for best study spots on campus. Open 24 hours a day, five days a week, it’s no wonder students tend to gravitate towards the space. The library has six floors, with study spaces available on all of them, giving students the chance to spread out or find quiet corners if necessary. There are also big group study rooms, research rooms and a quiet floor, located on the sixth floor.

There are plenty of different spaces to settle into. Valley provides huge tables, whiteboards and workstations, and a plethora of comfy chairs. Also provided is over 100 computers available for use by students, both Mac and Windows. The multimedia desk can also assist in renting equipment, printing posters and theses.

Jasmine Mezghiche and Anabel Splitstoser often study at the library.

Both Mezghiche and Splitstoser live close to the library in the dorms and prefer it as a space to get out of their residence building.

“It’s a place other, to study, then our rooms,” Splitstoser said. “We live close in the dorms so it’s easy to get to.”

Splitstoser said she spends a lot of time in her room so she appreciates getting out and getting a fresh environment to study in.

Mezghiche enjoys the space for similar reasons. She likes getting out of her room for a change of scenery. She said she also appreciates the Java II coffee shop, located on the first floor, because of the access to coffee without having to leave the building.

A popular place within the library to study is the rotunda. On each floor there is a section of the floor that is built in the shape of a circle. On the second, fourth and fifth floor, these areas are available to students to sit in.

Kaitlin Walsh, who studies English at OSU, specifically enjoys these areas and the library in general.

“I genuinely like the library, I’m an English major, so I spend a lot of time here,” Walsh said. “It works really well. It’s a warm spot and it feels like a community place.”

Having the sense of community is an allure for students like Walsh. Being surrounded by other students can often be motivating.

Lana Klipel, who joined Walsh for a study session, agreed with Walsh’s feelings towards the common space.

“I love the desks as well, and just the background noise of other students studying,”  Klipel said.

Ashe Hester, sitting alongside Walsh and Klipel in the second floor rotunda, had never been to the library before.

“I came here this time to be with my group, but I usually study at the veterans center across the street,” Hester said. “It’s pretty quiet and my tutors are there as well.”

The Veteran’s Lounge is located across the street from the library, located in the Memorial Union.

The library is especially popular because of its overwhelming accessibility to any resources students may need. The circulation desk, located next to the main entrance, lends laptops, kindles, ipads, chargers, headphones, adapters, calculators and even board games.

For those who enjoy a taste of art, the Valley Library is no stranger to embracing the Pacific Northwest style. With over 140 pieces displayed throughout the library, it certainly isn’t a bleak environment to spend hours in. The art includes paintings, sculptures, photographs and more.

Though the home of OSU’s competitive engineering programs, the building actually has a rich history and innovative build. Kelley is 153 thousand square feet of pure sustainability. Certified from the U.S Green Council, Kelley is the no.1 greenest academic engineering building in the country.

What makes it so green? For one, windows that automatically regulate temperature by opening, closing, and turning the heat or AC off when necessary. The immense amount of windows help keep the building lit and cut energy down by 40%. Rainwater is collected and stored in a 16,500 gallon tank that is then used to flush toilets and irrigate plants around campus.

Emma Sheets, a third year student studying engineering, studies at Kelley because of its convenience.

“There’s outlets by all the tables and open sunlight,” Sheets said. “Also there’s a cafe right there.”

Sheets said she enjoys all the windows that light up the common area, even when it’s cloudy outside it still stays lighter than most buildings on campus.

Kelley is equipped with a large variety of seating resources and snack necessities. The main area of the building is a huge open common space filled with tables, couches and chairs. Though mostly a studious work space, there is some chatter and an e-cafe smack in the middle of it all.

The building also has glass conference rooms, sky-bridges and graduate student office clusters to assist students with their studies.

Austin Sharp and Garrett Brown study at Kelley because it offers them resources for their major. Both Sharp and Brown are computer science majors.

“I choose to study here because I have access to professors and [teaching assistants] for the class I’m working on, and also the cafe,” Sharp says. “I guess since we’re all in the same major you’re going to have similar students with you who can help you if you get stuck.”

Brown enjoys studying at Kelley for similar reasons. “Since I’m a computer science major as well, I too utilize the teachers and TAs that are here.”

The building is home to computer science and electrical engineering majors, which help drive the school’s reputation for leading collaborative research projects.

Sharp and Brown both also appreciate the access to the cafe, located in the center of Kelley in the common area.

Kelley Engineering was founded with about 45 million dollars. 20 million as a gift from Martin and Judy Kelley, 20 million matched by the state of Oregon, and five million from private donations. Martin Kelley was a chief engineer at one of the leading construction businesses in the nation and oversaw much of the development of the building, hence the name.