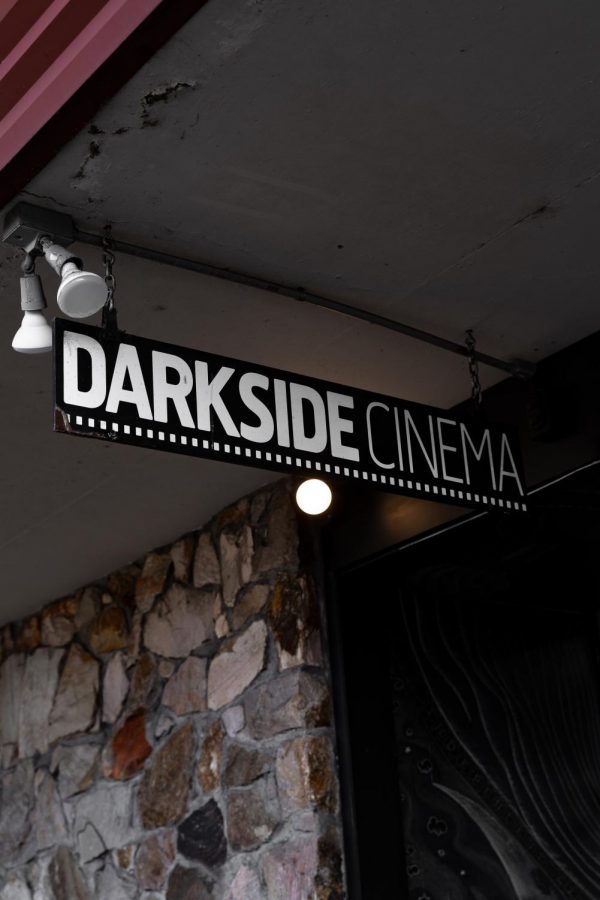 The Darkside Cinema sign hangs above the main entrance of the theater.

AMC Classic Theatre has been serving the Corvallis, Ore. community for three years at their Northeast Circle Boulevard location. This year, it was selected by the Oregon State University and Corvallis community as a “Best Of: movie theaters” location.

AMC Theatres is based out of Leawood, Kansas, and is one of the largest movie theater chains in the world. Their “AMC Classic” banner is positioned as smaller, value-oriented cinemas, developed after AMC’s purchase of Carmike Cinemas, which was once housed in Corvallis’ Circle Boulevard location. Today, the Corvallis location is the only “AMC Classic” Theatre in Oregon.

Student pricing discounts are offered specifically to students, which can be utilized by showing a student identification card at the box office. Additionally, the Corvallis AMC Classic location offers a variety of food and drink options, including MacGuffins Bar, which serves beer and wine. The theatre also has Coca-Cola Freestyle, a machine that provides patrons with over 100 drink options.

In response to their “Best Of: movie theaters” selection by the OSU and Corvallis community,  Smith expressed excitement.

“We are so thrilled and grateful to be selected as one of the best movie theatres,” Smith said via email.

Darkside Cinema, located in a red brick building off Fourth Street downtown, is the only independently owned and operated movie theater in Corvallis, Ore. This year, it was voted as a “Best Of: movie theaters” selection.

Darkside Cinema is open every night and shows independent, foreign and art films that aren’t shown at local movie megaplexes. Joey Bauer, the Darkside Cinema’s manager, said the theater’s owner, Paul Turner, has been exhibiting arthouse cinema in Corvallis since 1997 and continued on with Darkside Cinema when it was established in 2005.

Bauer said what makes Darkside Cinema unique to the Corvallis community are the films they exhibit.

“We are able to show films that you otherwise wouldn’t be able to see elsewhere. We also hold a variety of film festivals throughout the year, as well as programming every month including silent films with live musical accompaniment by the group Sonochromatic, who provide their own improvised film score,” Bauer said via email. “We are very personable with our patrons and we help to make them feel welcomed and comfortable.”

Bauer said the theater’s unofficial mission statement is to “suck less, every day,” and to strive to bring movies to the theater that hold significance and value to the artform of film.

“We have built a unique rapport with our patrons by being able to accommodate their cinephilic needs. We feel it is important to watch a film in a dark room with strangers. There is a magic in immersing yourself in a film with other people gazing at the screen with you. You share an experience and form opinions on the artform. You learn things about different points of view within the cinematic landscape. We care about this experience that our patrons have when they’re watching a film,” Bauer said via email. “We feel honored about being selected. It shows people care about what we do.”

Downtown Corvallis, Ore. is home to the Whiteside Theatre, an iconic building that showcases a grand neon marquee on Southwest Madison Avenue. This year, it was selected as one of the “Best Of: movie theaters.”

The Whiteside Theatre was originally built in 1922, and was the second grandest movie palace in Oregon at the time, according to the theatre’s website. Since then, it has undergone renovations, but still maintains much of its original design and integrity, including the Italian Renaissance architecture and the building’s ornamented details.

Jen Waters, the executive director of the Whiteside Theatre, said that although the Whiteside was voted a “Best Of: movie theater” selection, the theatre offers more than just movies: it hosts panels, live music, educational programming and other community-based events.

“Movie programming is really only one of the things that we do, but we do a lot of second-run movies, which I think people enjoy—stuff that maybe people didn’t get a chance to see in the theater when it came out because it’s older than they are, or they were kids when it came out,” Waters said. “I think that we have the ability to speak to some nostalgia.”

“We’re trying to be a community space in a lot of ways,” Waters said. “Donations and grants fund us, but we also rent to a lot of different community organizations.” The programming tends to pay for itself.

In response to the “Best Of: movie theaters” selection, Waters expressed excitement.

“That’s awesome. That means that we’ve got students from OSU coming to our movies,” Waters said. “Sometimes it’s hard to tell what the demographic is because we’re so busy just trying to get people in that we don’t know exactly where people are getting the information from, so it’s really awesome to know that OSU students are coming to the Whiteside.”

The Whiteside’s next event, a show from Dam Right Drag Night entitled “Seeing Queerly into the Future,” will take place on Saturday, Jan. 25 at 8 p.m.