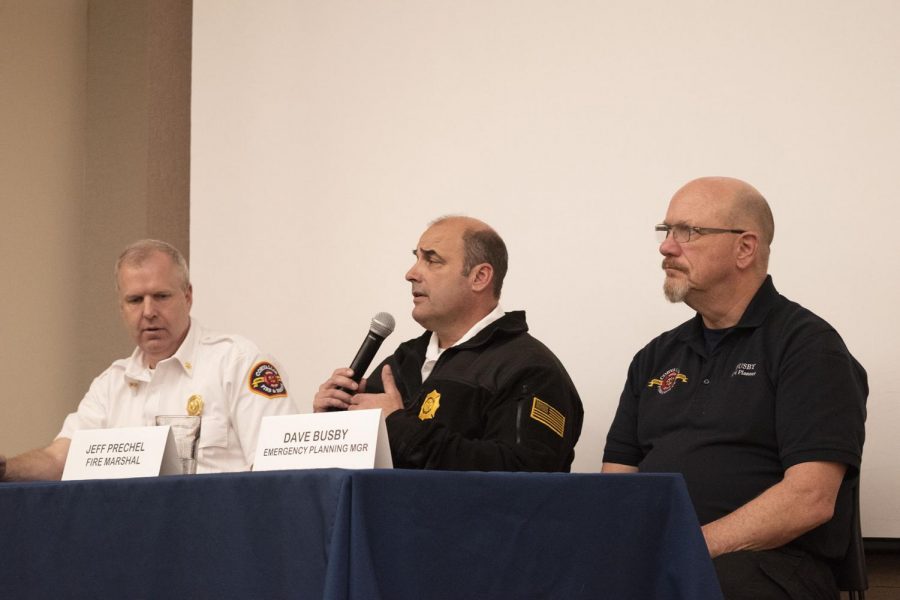 Corvallis Fire Chief Kenneth McCarthy, Fire Marshall Jeff Prechel and Dave Busby, the emergency planning manager, address the public at the first Know Your City event. The second event of the series will take place at 7 p.m. on Thursday, Jan. 30 in the public library, with representatives from the Corvallis Police Department.

Correction: This story originally misidentified which Corvallis Fire Department official came to his position from San Jose, Calif. The story has been updated. The Barometer regrets this error.

Know Your City, a two-part public event series with panels featuring the Corvallis fire and police departments, is being put on by the League of Women Voters of Corvallis, in partnership with the city, the Corvallis-Benton Public Library and the Corvallis Sustainability Coalition.

The fire panel was opened by McCarthy, who was recently hired as Corvallis’ fire chief after a long career in San Jose, Calif. He outlined his many concerns for the department, which includes measures to bring the department up to standards set in the city’s “Vision 2040” plan.

“What would it take to go from diesel to electric?” McCarthy said. “We have a nice staff with the ability to support long term planning.”

Other issues McCarthy addressed during the panel were mental health and diversity, stating that the department had created many working groups to deal with both.

“When you talk about diversity, we need facilities to support that,” McCarthy said.

After serving in the Navy and working for Emergency Management at Navy Facilities in both San Diego and Fresno, Calif, Busby was hired as Corvallis’ first full-time Emergency Planning Manager. During his time in Corvallis, he has helped spearhead cooperation between the city and the county to tackle emergencies.

“[We] came to the conclusion that… [very few] disasters don’t require the city and the county to work together,” Busby said.

Busby said that his goal was to help run workshops with various organizations in the area, as well as run through evacuation training with various neighborhoods in Corvallis. He also is working to get culturally appropriate Spanish language resources for emergencies and to link Oregon State University and the Corvallis-Benton emergency operations centers together.

One of the questions of the night came from a community member regarding the homeless population of Corvallis in the event of a disaster. Busby said that the department has been working on outreach in order to incorporate them into any emergency management planning that occurs. This change was sparked after the flooding of the Willamette River in 2019, which acted as a wake up call for the department.

The city fire marshal, Prechel, has encountered many new challenges, including the large number of historic buildings downtown, which were not designed with modern fire codes in mind.

Another issue Prechel discussed was the infrastructure of the city, as well as the width of the streets downtown, which in some occasions, they may not be able to fit engines through due to the angled parking.

“Fire access is more restrictive than any time in the last 100 years,” Prechel said.

The three answered many other questions from the public regarding community concerns, ranging from questions about suicide and mental health in the department and the possibility of commandeering ships to ferry people across the river in the event the bridges were out.

The second event of the Know Your City series will take place at 7 p.m. on Thursday, Jan. 30 in the public library, with representatives from the Corvallis Police Department.