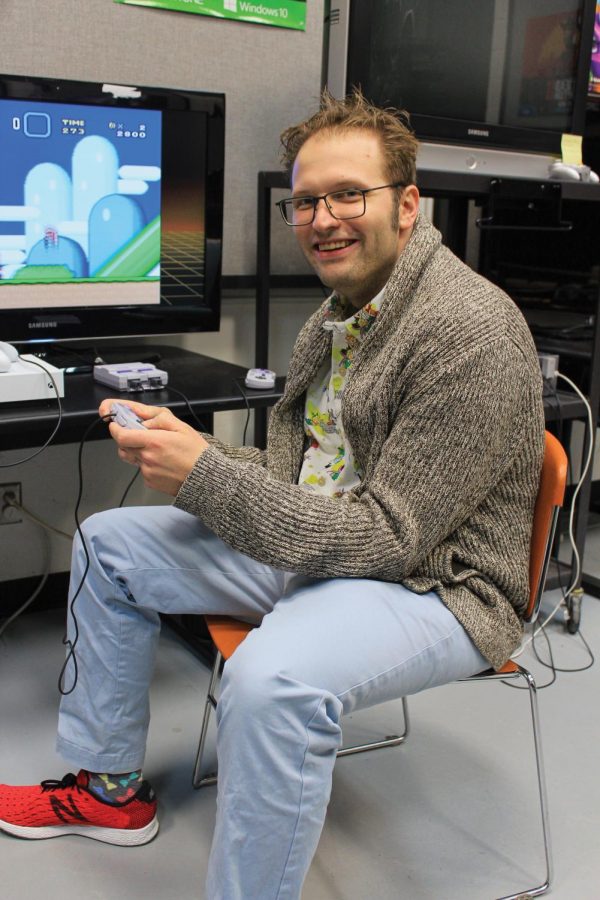 Senior Professor of Organic Chemistry Daniel Myles, Ph.D., was chosen within the top two most admired professors on the OSU Corvallis campus.

Myles, who has been teaching at Oregon State University since 2007, and said he has a great appreciation for his chosen profession.

“I still walk into the classroom excited to teach,” says Myles. “I create a warm and welcoming teaching environment.”

However, it seems Myles isn’t the only one who has observed the effect which his teaching methods can sometimes have on his students.

“He created a very engaging environment,” said biology major and former student of Myles, Ellie Ryan. “You could tell he put a lot of work into his lectures.”

According to another former student of Myles’, nutrition major Kendra Braun, he cares about what he teaches and would often get excited to discuss it with students.

Braun said she believes Myles is a very effective instructor. “He was always really good at explaining things,” she said. “He goes through things very systematically and has a good note-taking system,” said Braun.

According to Ryan, although organic chemistry can feel intimidating, Myles will often spark students’ curiosity.

“It’s such a dreaded class,” Ryan said. “Chemistry isn’t my strong suit, but he was always concise about explaining a topic.”

According to another former student of Myles’, psychology major Natalie MacMillian, he is very passionate about a topic that is rarely exciting, and throughout the entirety of her year in organic chemistry with the professor, he would often explain why learning such a topic is beneficial.

Myles said it’s common for many students to stick with him throughout the extension of their organic chemistry experience. “I think they find something they like and they stick with it,” Myles said.

Myles attributes his ability to help students comprehend such complicated notions to his dedication and willingness to develop a strong connection with many of them.

According to some of his former students, such devotion to his work has proven crucial to Myles’ success. MacMillian, Ryan and Braun said they appreciate Myles’ effort to get to know his students and can often put a face to a name.

“I come from all different angles when teaching,” Myles said. “I let the students know there is a lot of responsibility on them, but I will always do what I can to help.”

Myles’ favorite part of instructing is “when that light bulb goes off and they just light up with excitement.”

According to Myles, many students get frustrated with the course and feel compelled to give up when feeling hopeless. However, he said he remains determined to offer guidance and understanding in times of frustration.

Myles said, “When that light bulb goes off, they get the biggest smile on their faces. I would say that is my favorite part of being an instructor.”

Daniel Faltesek, Ph.D. and professor of communications within the School of Liberal Arts, was voted among the top two favorite instructors on the Corvallis, Ore. OSU campus.

According to Faltesek, he offers an excellent outlook on what he describes as 21st-century academic research and what it has to do with actual communications within social media and real-world platforms.

Communications major Bailey Breving, who took Introduction to “New Media Communications” with Faltesek, said he has a remarkable ability to create relevance within a classroom setting by developing course content which is very relatable to current-day events.

“People are very engaged during his lectures and he always gives the impression that everyone can speak their minds,” says Breving.

However, it appears that Faltesek is capable of not only relating modern-day events to his students, but of offering an almost entertaining form of instruction to spark and maintain their interest as well.

As described by Alex Vartanov, a student who,like Breving, took Introduction to “New Media Communications” with Faltesek, his lectures are very unique and go by very fast as he is dedicated to developing relatable content while encouraging every student to remain focused and engaged.

According to Vartanov, Faltesek is “very knowledgeable and encourages students to ask questions during exams because he claims to be ‘better than a notecard.’”

According to Breving, Faltesek is particular about students understanding concepts related to real-world situations as compared to the regurgitation of factual content.

“Faltesek is so fun and energetic but so brilliant as well and his tests are always, what he calls, ‘Open Dan’ because he wants you to ask questions while taking them,” Breving said.

Breving also attributes Faltesek’s intrigue as an instructor to his passion for helping and connecting with his students, and according to both Breving and Vartanov, Faltesek offered his students personal guidance before lectures regarding available resources such as food stamps or mental-health services.

“He always reminded us that there are services on campus and always wants to make sure our mental health as well. He was also very good about maintaining office hours to give us a private space to ask for academic and personal advice,” said Vartanov.

According to Breving, Faltesek takes an impressive amount of time to get to know everyone he meets. Breving said Faltesek told his students to take care of themselves in the midst of finals week, something that signified, to her, that he cares about his students.

Faltesek says the satisfaction he feels when students have growth moments and everything seems to come together is what he values most about teaching.

“Creativity is an excellent way to be a capable manager of change and what develops is a strong capacity for how one views the world,” Faltesek said.

In the end, what do Faltesek’s students attribute to his popularity?

“He is the most unique professor I’ve ever met,” Vartanov said.

As Breving put it, “professor Faltesek is a true treasure to OSU.”