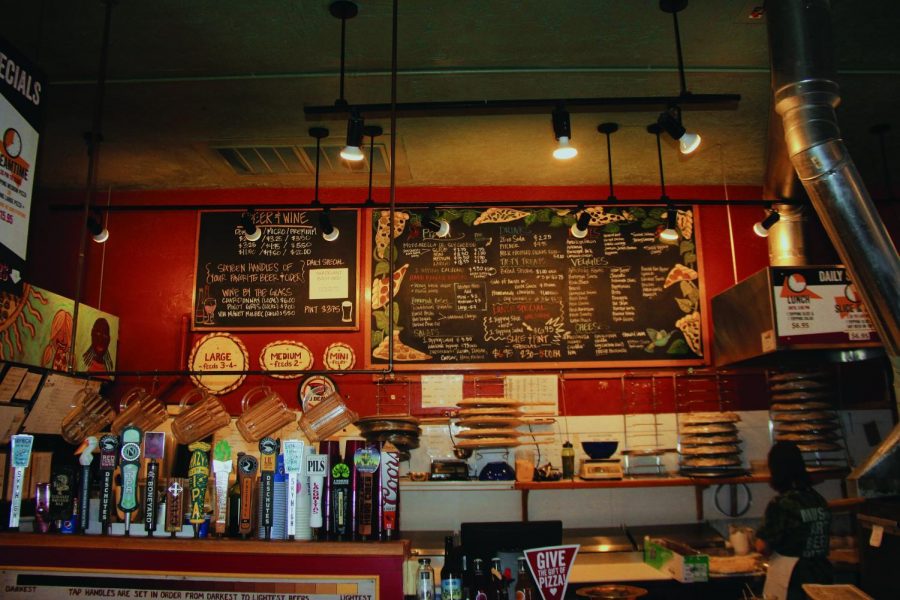 At the ordering counter in American Dream Pizza, there are drinks on tap, pizzas in various stages of production, and a large chalkboard menu.

Correction: This story originally misspelt Gary Weyhrick’s name. The story has been updated. The Barometer regrets this error.

A crowd bunches into a two level grey concrete building on NW Monroe Ave. every Saturday. A live version of Bob Marley song Zimbabwe echoes in the background, and the air smells of slow cooked pork and chicken. Did you make it to heaven? Not quite yet, but close—very close.

Weekends are the busiest days for this Corvallis favorite. Local Boyz, a Hawaiian restaurant near campus, has been in business since January of 1993. It has served 26 classes of OSU students thus far, and there are no signs of that changing.

Roy and Kim Marchesi are the restaurant owners, and they plan to keep it in the family. Besides a wall being taken down to add more space for customers, not much has changed at Local Boyz —including the menu.

According to Gary Weyhrick, the restaurant took about five to six years to become a popular destination.

“Now it’s so established we do no advertising,” said Weyhrick. “The best advertising is word of mouth.”

Local Boyz is not only popular among OSU students, but among other PAC-12 schools as well. UCLA Softball and Volleyball teams make a stop whenever they’re in town.

The restaurant has also been featured on ESPN Gameday, but when they asked if they could film what happens in the kitchen they were declined.

“We’re not trying to give away secrets,” said Weyhrick with a chuckle.

Next in line is the Mixed Plate which can combine two of these meats: Kalia’s Sweet Ribs, Hawaiian Style Steak, or Sweet Shoyu Chicken. All of the plates come with rice and macaroni salad on the side.

Kenadee Simpson has been working at the restaurant for over two years. Simpson said she likes how the people she works with create a sort of extended family.

“Saturdays are stressful, but we always make it fun,” Simpson said.

In order to be served, customers have to get an order for take-out or just do it old-fashioned style and show up at the restaurant to order at the front counter. Local Boyz does not use any food delivery apps or services.

“We don’t want anybody delivering our food for us. We don’t trust anybody to deliver our food and deliver it right. We just want people to know they’re getting what they expect,” said Weyhrick.

Local Boyz does have a catering service which can feed up to 40 people. OSU’s College of Engineering normally does once a week.

Randy Wellendorf has worked at Local Boyz for 15 years as a maintenance worker, fixing the grills and other appliances. He said he enjoys the atmosphere, the owners, and the other staff. His favorite thing though? The food.

“It’s great food, lots of it, and for a reasonable price,” said Wellendorf.

Across from campus sits another local favorite, the original American Dream Pizza. Amid the chatter and laughter of customers filling up on beer and cheesy slices wafts the delicious smell of their original dough recipe and 50 toppings.

For 30 years, American Dream Pizza has been serving hungry college students and residents of Corvallis. The Campus Dream was created in 1989, when Scott McFarland and Sebastian Manilow took their recipe from Portland and brought it to OSU. Along with the downtown location and two bars in between, McFarland also has had his hands in creating another Corvallis favorite—Sky High Brewing.

Manager, Valerie Obermeyer has worked at the American Dream Pizza campus location for over 15 years. She believes that what has set them apart from other pizza places in the area is their dough.

A “cherished third-generation recipe” states their website, the dough is crafted from non-GMO flour from Pendleton Flour Mills.

“You either hate it or you love it,” said Obermeyer.

Trevor Howard and Aaron Weiss frequent the campus location two times a week, talking over a few of the many rotating craft beers on draft.

They said they believe that the topping availability American Dream Pizza them apart from the local competition.

Howard’s favorite thing off the menu—pesto, potato and BBQ. “It has a unique flavor,” he said.

Friday and Saturday can be the busiest days at the campus location, with a lot of families coming in for a weekend meal. On game days the crowd gets even larger.

Along with hefty amounts of pizza and beer, American Dream also hosts live music, and art. Some of the art that adorns the walls is supplied by Angela McFarland, the owner’s wife.

Obermeyer’s favorite thing on the menu is the Edward Abbey, made of pesto, feta, artichokes and sundried tomatoes. The local favorite is The Bent, made of pepperoni, sausage, mushrooms and olives.

After a good weekend, everyone needs to replenish with some Pad Thai, right? At least that’s when Thai Chili gets their most customers according to assistant manager Shannon Pocan.

“We are completely slammed on Sunday, it’s typically an hour wait for to-go,” said Pocan.

Since 2009, Thai Chili has been serving up flavors of Asia. Their most popular dish is the Pad Thai with Chicken and level-two spice is an OSU student favorite.

“Don’t tell them that,” Pocan said with a laugh. “They don’t need to order more, they order so much.”

Thai Chili is a family-owned business with two generations of the Chaicharn family working there. Owner Gai Chaicharn still works in the kitchen along with her daughter Cattie Chaicharn. Cattie Chaicharn is a graduate of OSU and is back working for her family business.

The business also employs 15 OSU students at any given time.

The menu on Thai Chili’s website is outdated, but they are currently working on updating it. The full menu can be found in Thai Chili’s restaurant. Pocan just finished designing the menu herself, including taking all of the photos of their dishes.

Thai Chili has a wide selection of food that is either gluten-free or vegan for those who need to meet extra dietary needs.

Pocan’s favorite thing on the menu is their Lime Noodle Soup with vegetables.

“That’s pretty unique, I don’t think a lot of places have that,” Pocan said.