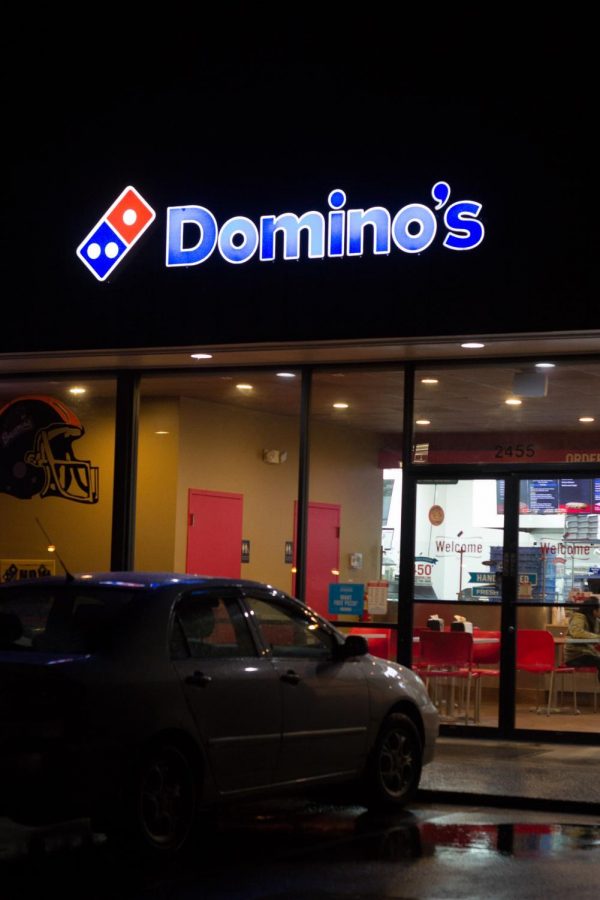 Dominos, located on Monroe Avenue, is open until 2:00 a.m. on weekdays and until 3:00 a.m. on Fridays and Saturdays.

When Friday night rolls around each week, many restaurants get ready for their busiest time. The Beaver Hut & Dam Growlers, being among those restaurants, is located on Monroe next to Clodfelter’s, a popular bar in town.

The Beaver Hut opens at 7:30 a.m. on weekdays and 9:00 a.m. on weekends, but their night hours are what often attract customers. Thursday through Saturday they are open until 2:00 a.m., making it one of the most popular eateries for late-night munchies.

Tyler Ashby, an employee at The Beaver Hut said that most of their business does flow in after dark. The highest traffic of customers starting after 9:00 p.m. on weekends. Ashby also said that often times the customers, mostly college students, make a pit stop at The beaver Hut before continuing their night out.

The menu consists of burgers, fries and most a variety of munchie combinations one could need, and at a very reasonable prices. Sam Buffington, a fourth-year psychology major, weighs in on the most popular menu items.

“People get a lot of tater tots, a lot of two-dollar burgers, the munchie mess and the mini corn dogs,” Buffington said.

Phineas McDermott, a zoology major at OSU, said the food is decent for the price it’s at.

“This is my first time coming to Beaver Hut,” McDermott said.”We came here for the adventure.”

McDermott said he decided to stop in because his friend, who also had never been before, wanted to give it a try. He agreed he would probably come back given the right circumstances and timing, if it were to be late at night.

Walker and Ashby both said they feel the Beaver Hut is underrated, and a lot of people don’t know that they sell alcohol and are technically a bar and pub. There is beer on tap and The Beaver Hut fills growlers as well.

“Yeah, I mean, we are a bar and restaurant, but people come here for the $2 burger and they don’t even realize we sell alcohol,” Ashby said.

Buffington said that despite the misconception, many people still do come in just to drink regardless of the savvy saver menu items. Even during breakfast, it isn’t uncommon for a customer to order a breakfast burrito and a beer, according to Buffington.

Having food delivered is one thing, but having pizza delivered to you at 2:00 a.m. is another. Dominos caters to exactly this need, located right off Monroe Avenue, next to Shogun Bowl and Subway.

Dominos is open at 10:00 a.m. everyday, closes at 2:00 a.m. on weekdays, and 3:00 a.m. Friday and Saturday night, making it one of the last remaining joints open in the quiet hours of the night.

Lucas Phillips, a first-year OSU student who plans on going into pre-nursing, has worked at Dominos for almost a month now. He said that their evenings are crazy in comparison to the rest of their open hours.

“Dinner rush from 8:00 p.m. to 12:00 a.m. is pretty hectic, and then from there it slows down a little bit,” Phillips said. “On the weekends it stays pretty consistent probably until about one in the morning. There have been times when I have been kept until 2:00 a.m. and it has still been pretty crazy, but usually around 1:00 a.m. it slows down.”

Phillips said that it is a relatively even mix of customers, ranging from students to families. During dinner time there is no specific type of person, but as dinner ends and the night begins, the majority of customers are OSU students.

“So far so good here, I’ve been working for about three and a half weeks,” Phillips said.” I got picked up not that long ago but it has been fun. It’s been fun to see the industry and make some pizzas here and there.”

Phillip urges everyone to come in to Dominos and check out their $7.99 three-topping pizza deal going on now.

Taco Bell may be the first thought to some when thinking about cheap comfort food on the go. With eight items alone on their dollar menu, there’s a lot to choose from.

Cheap prices, paired with their unbeatable hours could be what got them voted on the best of late night eateries. Taco bell is open until 2:00 a.m. most days, but until 3:00 a.m. on Friday and Saturday, if you’re using the drive through that is. The lobby closes at either 10:00 p.m., or 11:00 p.m. on the nights with extended hours.

Taighlor Story, a third-year nuclear engineering major, attends Taco Bell every so often. Story said she isn’t usually one to frequent, but she’d prefer to get something quick during exams and finals week, rather than having to cook for herself.

“You know, this is a really nice Taco Bell, the people here are really nice, so you know, all good things,” Story said. “I’ll definitely come in again.”

Some of their new items include rolled chicken tacos and a sour strawberry Skittles freeze.

Taco Bell is located on ninth street, next to one of the two Coffee Culture locations. They are also looking to hire new team members, conducting drop in interviews from 2:00p.m.-4 p.m. every day.