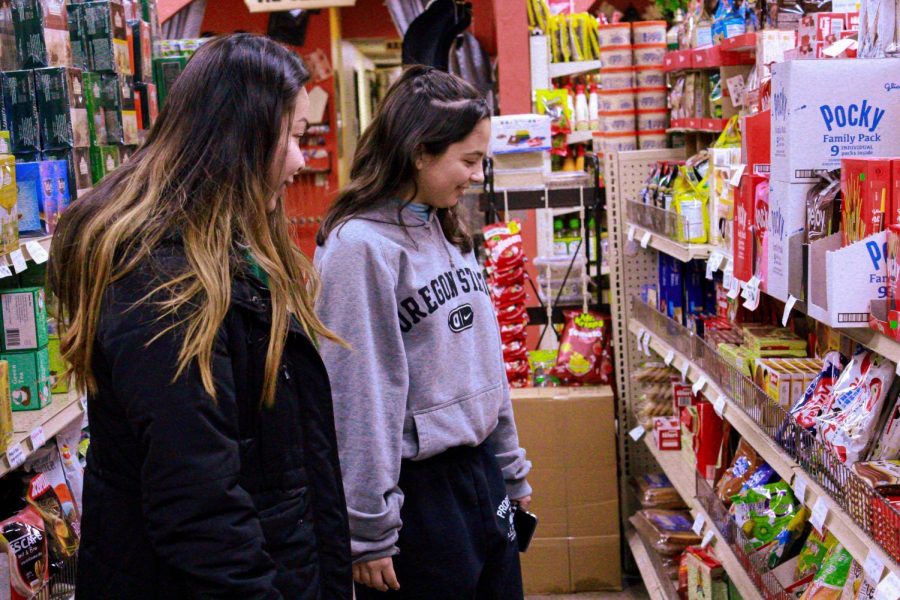 Finding foods from all corners of the world is generally not an easy task, especially in a quiet college town.

Open seven days a week and is located right off Van Buren Avenue, Rice ‘N’ Spice has been a Corvallis institution since the 1980s, and is the only store in town that specifically specializes in Asian foods.

As the name suggests, the store carries bulk rice and a variety of East and South Asian cooking spices, as well as noodles, candies, soups and meats.

With its wide selection, Rice ‘N’ Spice was rated among the top three international markets by the Corvallis community.

“Maybe I’ve been here too long,” joked store owner Chong Kim upon hearing the news. “Most of my customers are from OSU. I always tell them ‘study, study, study.’”

Oregon State’s diverse community consists of students who come to Corvallis from a multitude of locations. According to the university’s most recent enrollment data, OSU has nearly 3,500 international students.

With such a confluence of cultures, comes a variety of different tastes in food. For some students, the ability to eat familiar foods provides an opportunity for comfort while so far away from home.

Though the store’s official website lists itself as the largest Middle-Eastern market within the state of Oregon, Bazaar has made an effort to carry foods from all corners of the world.

“Over time we had many students miss items from their homeland and we’ve been adding them,” said Clerk Jayson Cordeiro. “I know every day we try to do better and expand our selection. Being from Maui, I grew up with Japanese influence, but never really got to try food from other parts of the world. By working here, I’ve been able to increase my horizon and try food from other cultures.”

With such a variety of different food options, Bazaar Market tries to sell something for everyone. However, if for some reason a customer cannot find a specific product, the market will gladly reach out to their various international distributors and see if they can place an order, according to front-end clerk Ibrahim Abdullah.

“At least 80% of our current items are usually from request,” Abdullah said. “We tell people ‘just let us know what you want’ because usually what we’ve found is when we look for any particular item, we end up finding a new supplier. From that new supplier, we end up adding even more stuff we were never even looking for.”

Because of their dedication to helping their customers find just the exact product they desire, Abdullah said that the majority of Bazaar’s customers are regulars. The store is also home to the Al Jebel Middle Eastern Restaurant, where his sister Khanda Abdullah works as a server.

An OSU alumna herself, Khanda said she was happy to hear the store was voted so favorably by the campus community.

“Bazaar is really a unique place in Corvallis, and working on the restaurant side, it’s nice to let our customers know all the ingredients we use are available just on the other side,” Khanda said. “I know from what I see everyday, the store seems to always get new items and I love going in and trying all the yummy stuff.”

According to Cordeiro, those who work at the market take pride knowing interacting with their customers and helping them find exactly what they’re looking for.

“Food really seems to bring people together,” Cordeiro said. “At bazaar we try to bring the world a bit closer.”

Ibrahim Abdullah works primarily at Bazaar Market, but he played a crucial role in helping his father find a location for Monroe International Market and set up the store, which he said was opened specifically with students in mind.

“A lot of them couldn’t come down to South Corvallis because they didn’t have a car, or sometimes they just wanted something between classes, like a snack or a particular drink,” Abdullah said. “We really wanted to make sure we get as close to Monroe as we can, and luckily we did so that we could really get something that supported students and have it somewhere where there’s really easy access to it.”

For students curious to know what kinds of food the market sells, Abdullah said that the store specializes in Middle Eastern, Indian and Asian foods. However, the store sells a much wider variety of foods, including European chocolates.

“From Europe to Asia, we almost have everything covered. We’re always trying to add more,” Abdullah said. “Even if you’re not looking for a particular ingredient, it’s definitely recommended you come in and browse.”