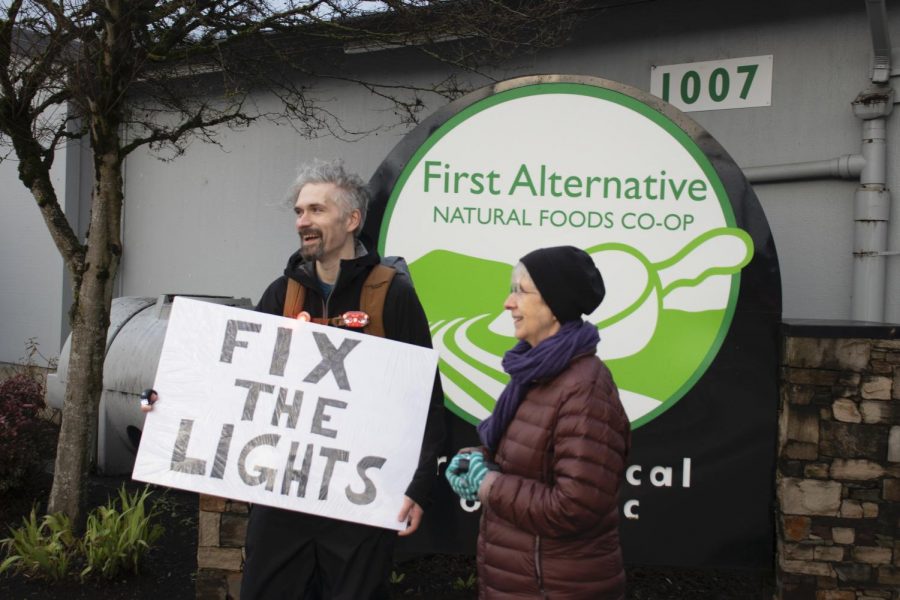 On Friday, a protest was held on the 1000 block of Southwest 3rd Street, after a car hit an 11-year-old girl due to a burnt-out street light on Jan. 8.

The protest began at 2:30 p.m., with the goal to get drivers to pay attention to the crosswalk. Signs displaying the words, “slow down” were placed at the scene, and drivers honked their horns and waved at the protesters as they drove by.

Dan Rockwell was one of the two protesters running the event. He is a Corvallis local and lives down the street from where the accident took place. Dan is a frequent biker of the highway while traveling between home and work.

“I didn’t know that person, but I live down the road and I had to do something,” Dan said.

They put together the protest to create awareness around the non-functioning street light, and  asked drivers to slow down while traveling on the highway. According to Dan, he was trying to make a change by advocating for a repair to the burnt-out light on the crosswalk.

“Oregon Department of Transportation, city of Corvallis, the mayor, someone needs to change the light. Stop arguing about paying the bill and get it fixed,”  Dan said.

Dan was protesting alongside his mother Cloudy Rockwell, who also is a resident of Corvallis. Both Rockwells were at the sight of the incident during the protest, and held  signs that were directed at the drivers passing by.

While crossing the road to continue the protest, Dan had to halt walking across the street for a truck that did not stop when the flashing lights appeared, the center refuge island light did not light up.

“It’s very dangerous, you can’t be aware if you don’t know about the lights,” Cloudy said once she could cross the road.

While the protest was in full motion, Cloudy was in full communication with her husband about what was going on.

According to Cloudy, her husband was calling the legislature, mayor’s office and ODOT. To let them know about the urgent need to get a new light put in the crosswalk.

While driving her daughter on the highway, Devon Quick saw the protest the Rockwells had formed and ended up talking to them about what was going on.

“It’s very uncomfortable to walk here. We know how dark this area can get, making it scary to walk across or drive through,” Quick said.

In the middle of the protest, Dan turned on bike lights attached to his coat. This was to keep himself safe from oncoming traffic as the protest went on into the evening. 7:30 p.m. is when the protest began to wrap up.

“I want [the light] back, it’s a deadly crosswalk,” Dan said.

Two deaths have happened at the 1000 block of Southwest 3rd Street crosswalk since the light burnt out, according to Dan.

As the protest continued, Corvallis police officers remained on the highway where the accident happened. Officers continually pulled drivers over who were speeding on the road.

According to Dan, the whole point of the protest was to inform whoever is in charge of fixing the light to do it now. The protest was also meant to educate not only motorists, but also pedestrians on the dangers of the crosswalk.

“I’m not angry at the motorist. I’m just sad. The emotion that got me out here was sadness, heartbreak,” Dan said.