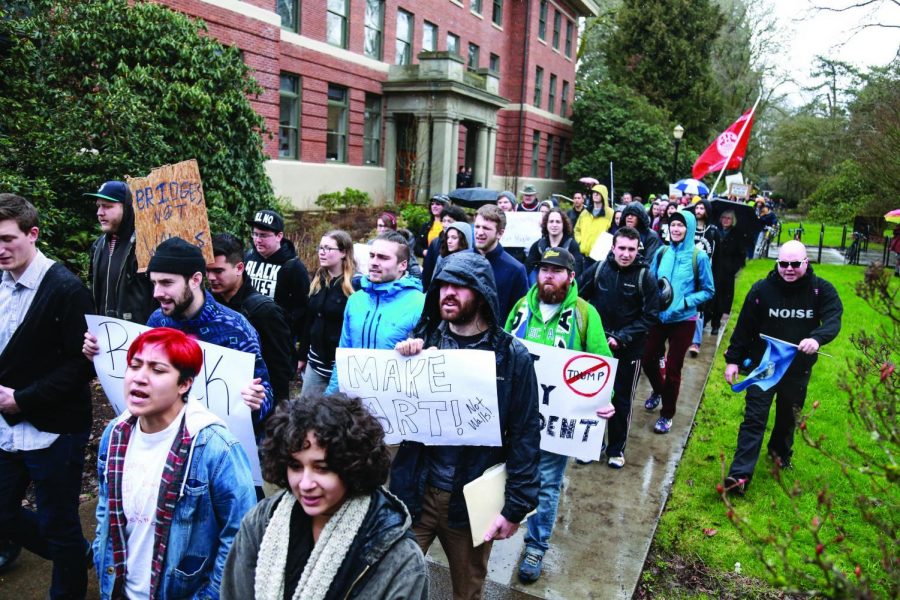 Students and community members make their way through campus in protest of the election of Donald Trump in January 2017.

A fair trial is needed in order for the American people to fully understand what the Trump administration has done.

Senators have stated throughout the impeachment process that they will not conduct a fair trial.

While the Senate does have full control over how the trial will be conducted, this is not fair to the American people.

On Dec. 18, the president of the United States was impeached under two articles presented by the House of Representatives Judiciary Committee. The two articles voted on are abuse of power and obstruction of justice.

“These are impeachable offenses,” Peter Defasio, Oregon Democrat of the 4th Congressional District, said in a press release about his decision to vote for impeachment.

Calif. Democrat Nancy Pelosi, Speaker of the U.S. House, announced Friday that this week, the House of Representatives will work towards a resolution to appoint impeachment managers and transmit the articles of impeachment over to the Senate.

Now the articles will be given to the Senate to conduct a trial to either remove the president from office or to acquit him. The Senate, according to the Constitution, has the sole power to decide how to conduct the trial.

Professor Rorie Solberg at Oregon State University said that the Senate now gets to decide how to move forward with the trial.

There are concerns of impartiality, especially of Ky. Republican Mitch McConnell, Senate Majority Leader, who has stated that he will look towards the White House for guidance during this process.

“There is nothing in the Constitution that says that [Mitch McConnell] has to remain aloof from the White House and there is nothing that says it has to be an independent process,” Solberg said.

What is more interesting is the fact the majority leader in the Senate holds less power than that of the speaker of the U.S. House during this process.

McConnell will hold the same amount of power as Ore. Democrat Sen. Ron Wyden. This means that even though some senators have been saying that there will be little to no testimony, a senator could request testimony and it would be brought to the floor for debate.

Professor Steven Shay at OSU said that the U.S. House speaker has always had more power over the majority than the majority leader in the Senate.

It’s important to know what is happening with the trial because these are the people that were voted in to represent their constituents.

“If people wonder why elections matter, this is clearly a case because we as citizens surrender a certain amount of power to those we elect to office. Those people can do things that no one else can do. I can’t vote on whether or not the president should be removed from office, but there are two people in the state of Oregon who can,” said Shay.

It’s important that there will be testimony during this trial, making it a fair trial. This is because while it is less likely that Trump will be removed from office, any information that comes out is important for the American people to know.

A fair trial is needed to ensure that the American people are educated on what is going on and what Trump may or may not have done.

With the 2020 election in November, any information that comes out in the trial will help American voters make educated votes on who they want representing them as the president of the United States.

While it is unlikely to swing Trump supporters, this could swing some Republicans to cross party lines if what comes out during the trial is negative and shows Trump did do what he has been charged with.

Though senators hold complete control of the process, a few senators need to stand up and request for testimony and documents to make sure the trial is fair.

The American people have a right to know what happened and this trial will help keep the citizens of America informed about the actions of Trump and whether or not he attempted to abuse his power as the president and obstructed justice.