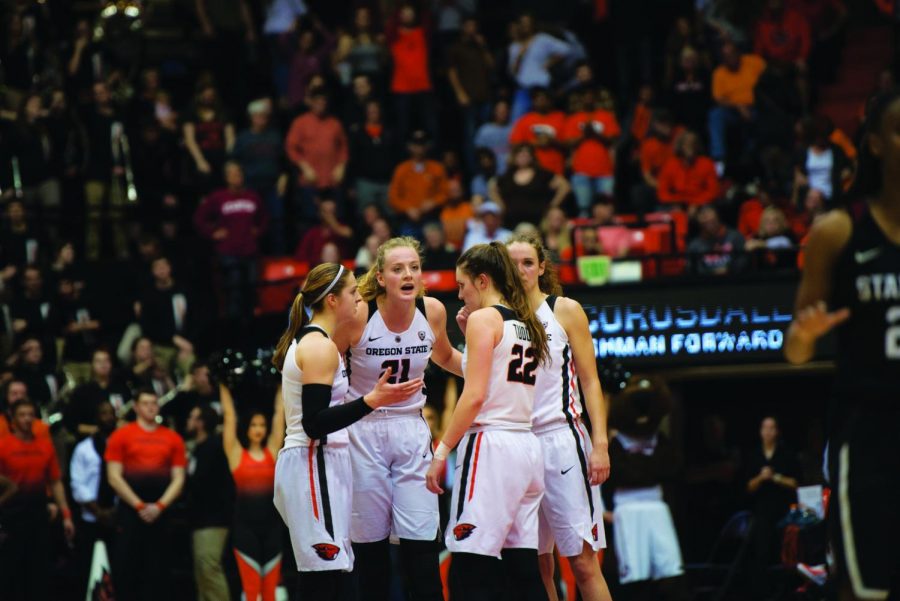 With 1.4 seconds left on the game clock, senior guard Mikayla Pivec hit a go-ahead basket in the fourth quarter to give Oregon State a 63-61 lead over the Arizona Wildcats on Jan. 10.

From there, the Beavers were able to hang on for the win in the final second. The Wildcats got one last chance to take the lead, but OSU redshirt junior guard Destiny Slocum was able to block the shot of Arizona’s junior guard Aari McDonald as time expired.

It was a fitting final quarter for a game that had been tightly contested throughout. The Wildcats went into the game with a 13-1 record and a national rank of No. 18 in the nation. Against Oregon State, Arizona proved they were worthy of their top 25 billing, going toe to toe with OSU and never letting them run away with a big lead despite a strong first half from the No. 3 ranked Beavers.

Oregon State ended the first half with a rebounding advantage of 23-12, including seven offensive rebounds in the first period. The Beavers have been strong on the glass all season and currently rank fourth in the NCAA in rebound margin.

Oregon State also played well beyond the arc. The PAC-12’s best team in three point percentage once again had a strong first half, closing out the first 20 minutes by shooting seven for 15 from the three point line. But despite a strong opening half where the Beavers hit their shots and controlled the rebounding advantage, Arizona kept their deficit at the end of the first half to six.

The Wildcats were able to keep pace with Oregon State through a strong day on defense. By the end of the first half, the aggressive Arizona defensive effort held Oregon State to 12 for 30 total shots on field goals while forcing nine turnovers. Going into the second half, the Wildcats defense continued to play aggressive and the two teams traded momentum through the final two quarters.

Up by 11 points nearly halfway through the third quarter, the Beavers had a chance to pull away with their double digit lead. But the momentum Oregon State began to build up through a fast start in the third quarter came to a close when the Wildcats fired back with a 10-0 run in the back half of the third period.

The Arizona scoring streak ended with a four-point play from OSU senior guard Kat Tudor that put the Beavers up 49-44. Momentum shifted back and forth through the final quarter, with both teams trading the lead and tying the final score before the game winning basket from Pivec.

Pivec, Oregon State’s leading scorer and rebounder, finished with a double-double against the Wildcats, shooting seven for 12 for field goals with 17 points total along with 10 rebounds and six assists. Despite finishing a quiet first half with five points, Pivec came on strong in the second to end the game as the Beavers’ leading scorer.

The strong night from Pivec helped boost Oregon State to their 15th win of the season and their third win in the PAC-12. Following their win in Tucson, Ariz., the Beavers were one of two undefeated teams left in the country. PAC-12 competitor and No. 8 UCLA was also 15-0 heading into their Sunday matchup. With the two teams ranked ahead of the Beavers both losing earlier in the week, Oregon State now has a chance to earn the nation’s top ranking.

OSU will return to Gill Coliseum on Friday, Jan. 17 when they will take on the California Golden Bears at 7 p.m.