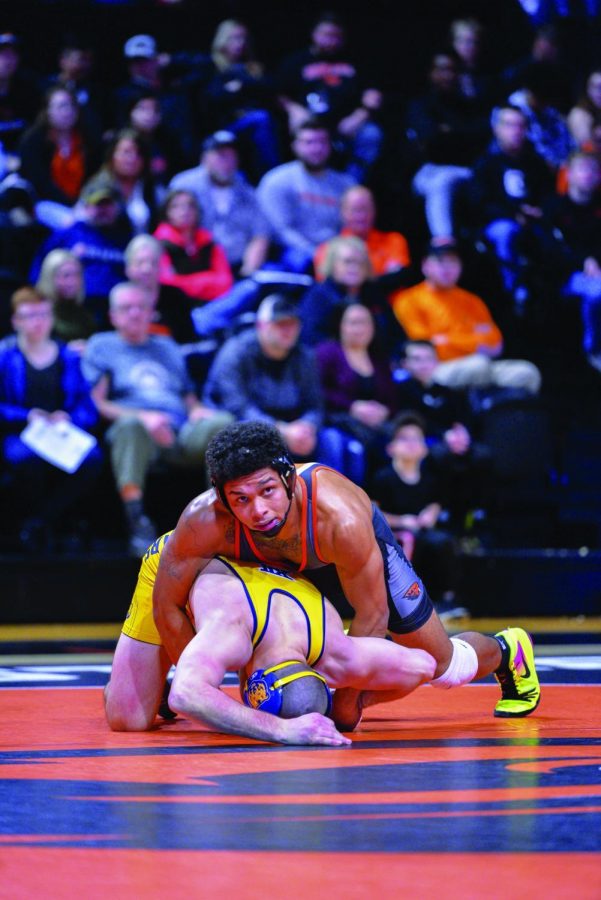 After defeating No. 22 ranked Michigan in Ann Arbor on Jan. 5, the No. 24 Oregon State Men’s Wrestling team returned to Gill Coliseum on Jan. 10 and defeated out-of-conference rival Northern Colorado by a score of 21-12.

The Beavers, now 4-1 as a team on the season, won seven out of the 10 bouts that night, including victories for multiple OSU wrestlers over opponents who were nationally ranked higher than them.

OSU redshirt junior Devan Turner, ranked nationally at No. 19 for the 133 pounds weight class, defeated his opponent in Northern Colorado freshman and No. 17 ranked Mousha Schwartz by a score of 7-1.

Turner, who won the Mountaineer Open back in November, recently placed 6th at the Southern Scuffle wrestling tournament on Jan. 2. He managed to earn three takedowns during his match on Jan. 10 and with an extra point for riding time, Turner defeated Schwartz and earned cheers from the crowd when his arm was raised in victory.

“I feel good,” Turner said about his ranked win and his performance. “I think you can always wrestle better. I mean, I haven’t peaked yet, I’m peaking at nationals, that’s the plan.”

Turner’s win improved his record to 17 wins and 7 losses on the season.

OSU redshirt Junior Aaron Olmos in the 165 pounds weight class beat No. 25 nationally ranked Austin Matthews by a score of 9-3. With the help of four takedowns and an escape point, Olmos defeated Matthews, a win that helped in OSU’s defeat over Northern Colorado.

“I personally, from last year, have had a lot of growth, just in my weight cut, in my training, just coming off injury last year,” Olmos said about his win. “This year, I’m healthy, so I’m feeling confident every time I step on the mat.”

Olmos improved his record to seven wins and eight losses on the season.

OSU redshirt senior Colt Doyle, ranked No. 33 in the 184 pounds weight class, beat his opponent, No. 28 ranked Alan Clothier, by a score of 4-2. Doyle recently placed 8th at the Southern Scuffle wrestling tournament.

“I lost to that guy twice in the last eight days. I lost to him twice at scuffle, went back to the room, had to work on what I worked on, and tonight, it worked out, so it feels awesome,” said Doyle. “You can always do better. I’m never satisfied, I always want to keep achieving, and it’s a good win under my belt.”

Doyle improved his record to 13 wins and seven losses on the season.

“We have a great team comradery right now. Everybody is positive,” Willits said about the team’s win. “We got a good win in Michigan, we got a good win now. I know they thought that they could maybe blank our team, but we came out here and showed them whats up.”

Oregon State will be compete against No. 7 Arizona State next week in Tempe, Ariz. at 6 p.m., marking the first PAC-12 dual meet for both teams.