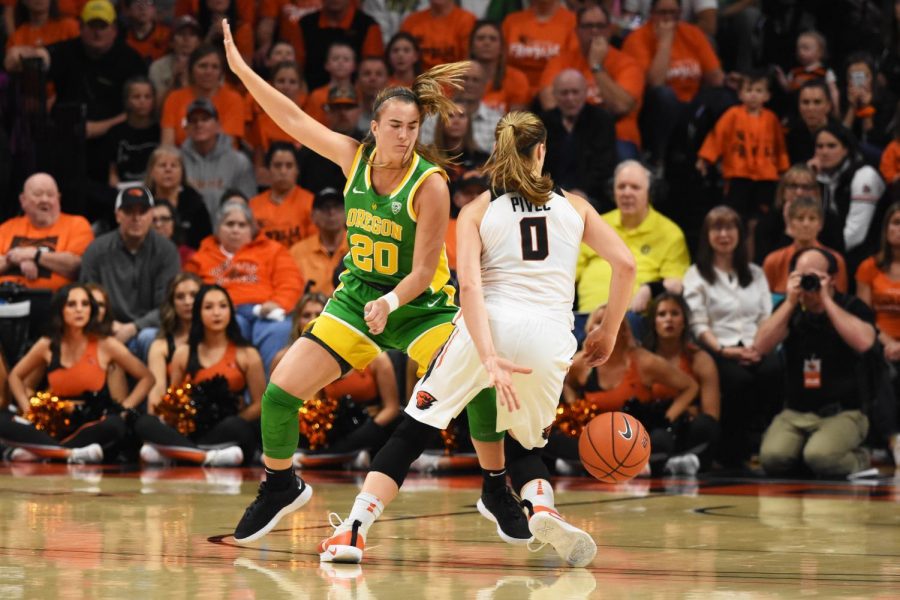 OSU senior guard Mikayla Pivec (#0) maneuvers around UO senior guard Sabrina Ionescu (#20) at Gill Coliseum. Dribbling the behind her back, Pivec advances forward to shoot two-pointer late in the third quarter, bringing OSU into the lead 39-38.

Head coach of Oregon State Women’s Basketball Scott Rueck will be the first to tell you that the energy and atmosphere in the Beavers’ home court of Gill Coliseum are different than anywhere else.

But with the in-state rival Oregon Ducks visiting for the final regular season matchup of the 2020 Civil War series, the energy in Gill before the game felt different than it has in seasons past.

Both the Beavers and the Ducks took time before the game to recognize the passing of NBA champion Kobe Bryant who, hours before the Civil War began, fell victim to a fatal helicopter crash along with eight other passengers.

Before the stadium opened its doors to the 9,301 fans waiting to take their seats, players from both sides joined at center court to honor Bryant’s legacy with a group prayer. The passing of the basketball legend was felt by everyone, with Oregon State’s junior guard Aleah Goodman summarizing the impact Bryant had on the game of basketball and women’s athletics in general.

“What he did for women’s basketball alone was huge,” Goodman said. “He had his own AAU team, he had daughters he was coaching up, so he was a huge voice especially in women’s basketball… hearing that news we [Oregon State and Oregon players] wanted to be together and to say a prayer.”

After the news of Bryant’s passing met the players, it found its way to those in attendance. The pre-game prayer led by the players was followed up with a moment of remembrance before the national anthem.

With the news spoken by the stadium’s announcer hitting many of the fans for the first time, Gill Coliseum was hit was a wave of audible gasps, before being overcome with a long, somber silence.

Players on either team were visibly emotional during both tributes to a man that had established himself as a fixture of basketball and as a role model in many of their lives. But with grief weighing on the shoulders of many and Bryant’s jersey number of 24 scribbled in Sharpie on the sneakers of a few of those players, both Oregon State and Oregon were forced to fight through adversity for round two of their rivalry series.

The impact of losing Bryant never left the building, but focus needed to shift to the task at hand. After a back and forth battle that saw the score tied seven times and the lead change 11, the visiting Oregon Ducks used a strong third quarter to pull ahead and keep the lead for the rest of the game for a final score of 66-57.

The first quarter saw both teams trading momentum in what was a tough defensive battle. The visiting Ducks began the game on an eight to nothing run while the Beavers struggled with an 0-4 start from the floor.

The scoring runs quickly switched hands to Oregon State, however, as the Beavers defense clamped down to force five straight missed shots from Oregon that helped lead to a 10-0 run by Oregon State.

While both teams took turns finding the basket in the first, the second quarter saw the Beavers and Ducks each come out firing on offense, leading to over 50% shooting in the quarter for both sides. After the offensive fireworks slowed as the quarter came to an end, Oregon State walked into the locker room with a 37-34 halftime lead.

Despite the halftime lead for the Beavers, the game shifted strongly in favor of Oregon as the second half began. A rough start from the field that saw Oregon State make 17% of their first third quarter shot attempts let the Ducks build up a lead that the Beavers could not come back from.

Rueck recognized the difference the third quarter had on the game at large, saying that a “choppy” second half kept Oregon State from finding their rhythm when they needed it most.

“They [Oregon] came out and really dictated things, second half especially,” Rueck said. “The first half had a nice flow to it. The first half was fun, I think both teams would say it was kind of fun. The second half was just so choppy… I thought they had a lot of energy in that third quarter.”

The round two Civil War loss marked the first time Rueck had lost a rivalry game against the Ducks in Corvallis in his tenure. Since he had taken over as head coach, Oregon State has either won the rivalry outright or split the series against Oregon. Not since the 2009-10 season have the Beavers lost both games of the Civil War series.

Losing twice to the rival Ducks comes as part of a larger, more worrisome trend for this season’s Oregon State team. The two losses to Oregon dropped the team’s conference record to 4-4, and after a 15-0 start to the season, the Beavers have now lost four of their last five games.

Senior guard Mikayla Pivec spoke on the frustration on the recent losing skid, but preached confidence in herself and the team going forward.

“I can’t remember the last time [Aleah Goodman] and I lost four out of five games,” Pivec said. “But I think we just believe in this program. Believe in our system. Believe in each other. And we know there’s going to be adversity along any journey,  and so we’ll be ready to continue growing and be the best we can be.”

Falling short in four of their last five has been uncharacteristic for a team that had begun the season on the longest winning streak in program history, but looking at the teams they’ve lost to, none of the Beavers recent losses have come as major upsets.

Of Oregon State’s last three losses, all of them have been against teams that were ranked in the top five at the time. The two games against Oregon came while the Ducks were ranked fourth, and the game before Civil War weekend was a loss against the third ranked Stanford Cardinal. All close losses against some of the best teams in the country.

Playing the PAC-12 conference as well as facing two ranked teams out of conferences, the Beavers were given one of the toughest schedules in the country according to Rueck, and the coach believes the road ahead won’t get much easier going forward.

“I’d like to see somebody’s schedule that’s tougher,” Rueck said. “We have Oregon twice every year, first off. And then we’ve got the Bay [Stanford and California] twice this year. We’ve got UCLA, only once, but we’re at UCLA. We got a short week every time we play Stanford…it’s a heavy load.”

Despite losing the Civil War, along with games to Stanford and Arizona State in the month of January, the Beavers will get nine more chances against some of the best teams in the country to find their footing going into the postseason. And going through the adversity of these recent losses to Oregon, Rueck believes his team is stronger because of everything they’ve gone through.

“We got to see some things this weekend that they do that other people have not yet, so basically we’ve got new material to coach from,” Rueck said. “We were challenged in different ways, we played in front of two crowds that will be unmatched the rest of the way. Once you get in those environments [and] you see those things, the next time around it gets easier. You operate more efficiently.”

Despite losing two games to a rival school, Rueck and his players have not lost their belief. The team hopes that they can turn around the rough stretch of losses they have suffered and use them as a learning opportunity to put the right foot forward against a dangerous PAC-12 schedule, a turnaround that will start with a road trip to Colorado on Jan. 30.