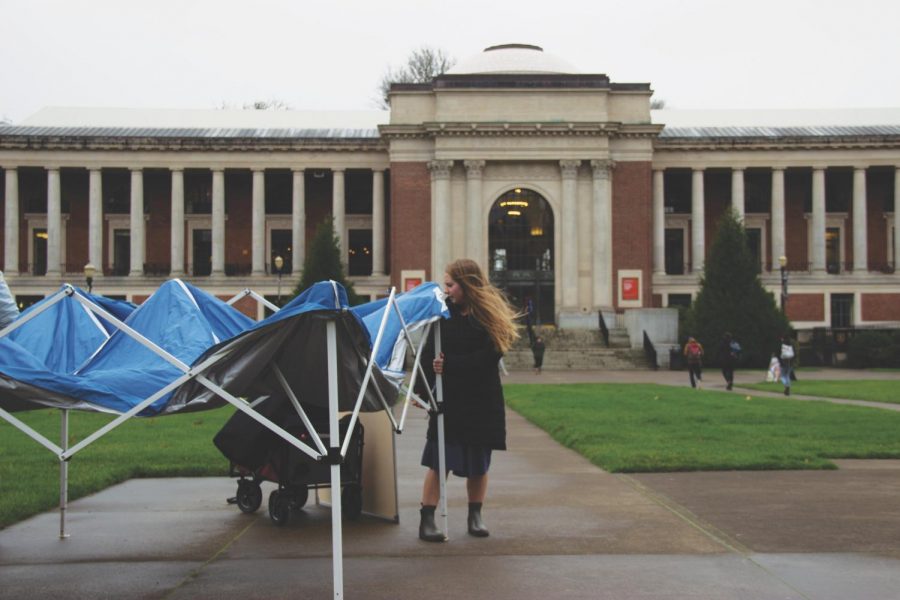 Sister Richard and Sister Cook of the Latter Day Saints Student Association brave the driving wind and rain to set up a booth near the Memorial Union.

Winter term has kicked off with some wet weather, and reports show that Corvallis may contend with a cold front that could bring snow. With snow comes the chance that it could get difficult for students and staff to commute to work or school, and the chance that classes could be delayed or altogether canceled.

According to the National Oceanic and Atmospheric Administration, the El Nino Southern Oscillation (ENSO) that often influences winter weather patterns is neutral this year.

“Without either El Nino or La Nina conditions, short-term climate patterns like the Arctic Oscillation will drive winter weather and could result in large swings in temperature and precipitation,” said Mike Halpert, deputy director of NOAA’s Climate Prediction Center.

These large swings in temperature and precipitation could potentially bring snow in the valley, large amounts of snow in the upper Cascades, and the coldest temperatures of the year according to NOAA scientists.

“During the next week, arctic high pressure is forecast to extend south from Canada into the Pacific Northwest,” said Brad Pugh, a meteorologist with NOAA’s Climate Prediction Center.

Deciding what to do in case of inclement weather on campus falls to OSU’s Incident Management Team. Members of the team will come together in case of an incident such as snowfall to make a recommendation to the president of the university as to what steps should be taken to decrease the likelihood of accidents.

Emergency Preparedness Manager Michael Bamberger’s job is to monitor the weather. That means waking up at 3:30 a.m. to gather reports, and should he deem it necessary, to get members of the Incident Management Team on a conference call to discuss recommendations to modify hours.

“We look at it as modifying the hours versus shut-down or start early,” said Bamberger. “We could choose to send students home early, yet still have basketball or a sporting event that goes on.”

OSU is more likely to hold classes than other schools in the area, such as Linn-Benton Community College. This is due to the number of students who live on or near campus, and the number of staff that live nearby. Half of the 10,000 faculty and staff live within a 20-mile radius of campus.

In the case of snow, OSU facilities go into overdrive working to clear paths to the most integral buildings and services. Priority falls to services like Student Health Services and dining hall facilities. OSU is also what is known as a core school, which means that if snow were to limit access to outlying buildings, the most crucial would still be accessible. This is due to OSU’s energy infrastructure that pumps steam through tunnels under sidewalks on the main thoroughfares.

Bamberger hopes to have notifications of closures out by 6 a.m. This way information is available for students and staff as they wake up and get ready to hit the road.

The OSU community can stay updated about closures through the OSU web page, Facebook, Twitter and OSU Alert. There is also the OSU Emergency Information Line—541-737-8000. This number provides updated information without clogging up the public safety dispatch line.

In the case of hazardous road conditions in the following weeks, Angela Beers Seydel, a public information officer with the Oregon Department of Transportation suggests that everyone be prepared. Beers Seydel advises everyone to have a full tank of gas, warm clothes, food, water, a blanket, a shovel, and other emergency supplies.

“The time to think is now,” Beers Seydel said. ODOT will be working 24 hours a day, seven days a week to clear the roads if the weather calls for it, but she believes safety is a community effort.

“If you drive in snow and ice, be prepared to use your chains, and practice putting them on and taking them off before you need them,” Beers Seydel said.

She advises using Tripcheck.com before driving or traveling, and checking it often to stay updated on the current road conditions.