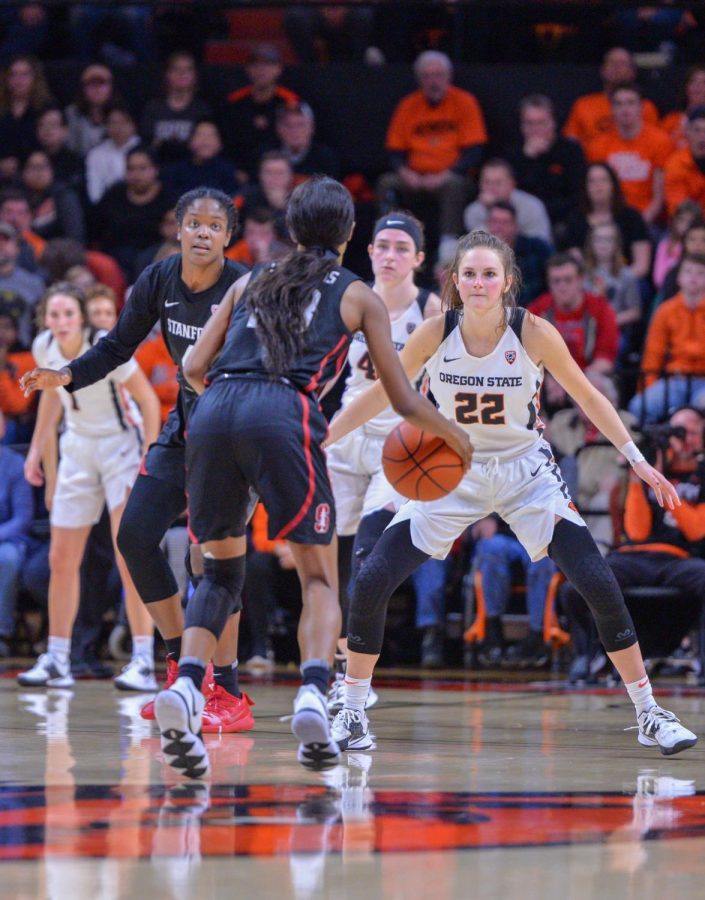 After defeating California at home on Jan. 17, the No. 8 Oregon State Women’s Basketball team would return back to Gill Coliseum on Jan. 19 to take a loss to the No. 3 Stanford Cardinals. Roughly 8,500 people packed Gill Coliseum to cheer for and support the Beavers.

Oregon State started off the first half well, leading 36-34 at halftime. But ultimately, Stanford rallied back and won the game 61-58, giving the OSU Women’s Basketball team their second loss of the season and their first home loss since last basketball season.

“I thought we played very hard today. The team was ready from the beginning, executed very well. Shot the ball right off very well, defended overall well. They had an answer with a lot of people who don’t normally make threes making threes to stay in the game. I thought they did a good job at that,” OSU head coach Scott Rueck said about the team’s performance. “And we fought to the bitter end. I was really proud.”

Rueck also said that he would work with the team the same moving forward after the loss like he would “if we won.”

“How can we be better tomorrow than we were today? Go back and see what worked and what didn’t,” Rueck said. “What did they do that caused us trouble and get better. That’s it, simple.”

“Not really positive right now. We just lost, and you don’t want that to happen,” Pivex said about if there were any positives from the game. “So, we’ll learn from the film, but right now it hurts.”

Slocum said that taking better shots would have been an improvement to her personal performance.

“I just think seeing the floor faster, finding an open person more could’ve been an opportunity for me to find some open teammates,” Slocum said.

“The Oregon State team is a terrific team. We had to really play and battle to win this game,” Vanderveer said. “Great fans. Beaver fans are great fans. I think it’s a tremendous compliment to women’s basketball.”

The OSU Women’s Basketball team will now put their full attention towards the Civil War series. The series started with the Beavers first facing off the Oregon Ducks in Eugene on Jan. 24th. After that, the Beavers will return back to Gill Coliseum where they will face the Ducks on Jan. 26th at 1 p.m.