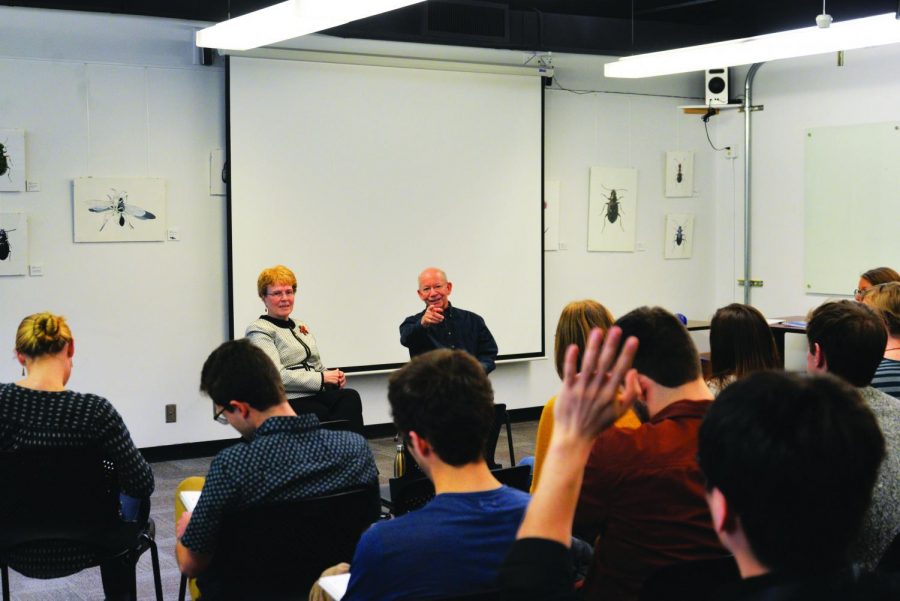 Correction: This story originally misspelt Jane Lubchenco’s name. The story has been updated. The Barometer regrets this error.

DeFazio has worked closely with OSU in many of his climate change advocacy efforts. He worked with the Oregon State Material Science lab on his 21st century transportation bill. On Oct. 15, 2019, DeFazio allotted Oregon State nearly $1.6 million for grants surrounding research about coastal dunes and beaches, marshes and wetlands, trade wind clouds and climate impacts on water suppliers.

DeFazio was invited to speak with Jane Lubchenco, Ph.D, a professor of the IB 518 Science and Policy course. Her class is comprised of graduate students working on their Masters and Ph.D degrees, who were given the opportunity to ask the Congressman questions pertaining specifically to their diverse career paths.

Claire Couch, a fifth-year integrative biology Ph.D student, was attending the event. She is the president of the Student Science Policy club at OSU, and had urged her fellow club members to attend as well. Couch prepared a few questions prior to the DeFazio’s talk, and said she was excited to have the opportunity to speak with him.

“I will be interested to hear Congressman DeFazio’s perspectives on why it’s important to integrate science into policy and what scientists can do better to make their voices heard,” Couch said. “I’m also interested to learn a little bit more about DeFazio’s specific positions on climate-related issues, especially the [liquified natural gas] pipeline that’s being proposed

DeFazio discussed a wide variety of topics and answered many of the students’ questions during his time in Lubchenko’s classroom. He spoke about his climate change committee activism, his future transportation and infrastructure bills and his qualms surrounding the bills being passed that threaten Oregon’s environment.

Along with this, the Congressman discussed the integration of science and policy, and the importance of informed policy makers.

Heather Fulton-Bennett, a fourth-year Ph.D student, research assistant in Lubchenco’s Menge Laboratory and teaching assistant for Lubchenco’s Science and Policy course, also attended the Congressman’s talk. She said she felt many of his points, especially those surrounding policy making, were extremely impactful.

“It was refreshing to hear that when a bill dies on the floor of, say, the House of Representatives, it’s not necessarily dead and all that effort didn’t go to waste,” Fulton-Bennett said. “I had been kind of frustrated about all this work and then things don’t happen, or all this work and knowing [the bill is] not going to pass, so that was a really nice thing to hear.”

Fulton-Bennett also spoke about the Congressman’s points that she found most helpful for someone in her field of study.

“I didn’t realize [Congress] had topical experts on their staff, and that was really interesting to know that they are really people to go to first, instead of trying to contact a policy maker directly,” Fulton-Bennett said. “And working on a topic like ocean acidification that is so closely related to climate change, I feel is really important to know how to get my science across, and also how best communicated. He mentioned stories and things that would relate to anyone in the country and that was a really good point.”

DeFazio also spoke about day-to-day student activism that lies outside of the scope of science and policy.

“They need to register to vote, they need to be vocal, they need to be involved in social media, maybe join a group on campus that represents your views, that’s involved in politics, contact their representative, just push. Push. But be involved. Don’t despair,” DeFazio said. “Let me give you an example of the last election. We took back the House of Representatives. I targeted campaigns around the country, I worked with seven Democrats who were running…and I had volunteers from…the [University of Oregon] and a whole lot of high school students who had come to my office one day a week and we would specialize on one person, and they would phone call into that district…and it worked. Six of those seven got elected, 24 of the 27 I was supporting got elected and we changed the balance of the House.”