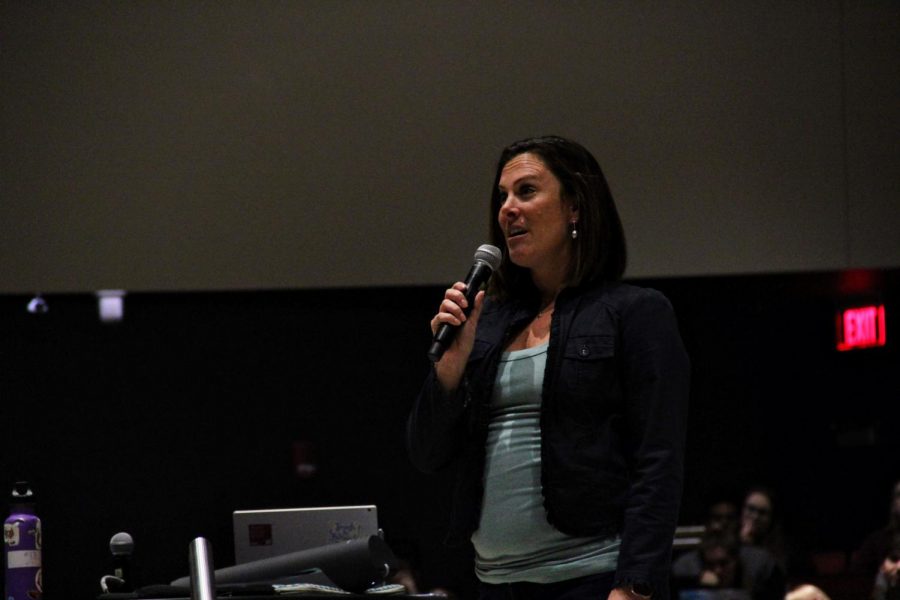 Erica Woekel, Ph.D speaks to a HHS 231 class. She is the director of Lifetime Fitness for Health at OSU.

Oregon State University’s Public Speaking class, a communications course in the Speech and Communications department, is in a three-way tie for the best baccalaureate core class.

All students are required to take a speech class for their baccalaureate core, and each class focuses on a different part of communication. The goal of the speech requirement is to teach students the basic skills of communication that are considered critical in academic and professional careers.

Bobette Bushnell, a senior instructor affiliated with speech and communication, said that one of his favorite things about teaching is when his students leave notes on his office door explaining the rewarding experience they gained from taking his class.

Bushnell said he wants his students to feel confident in their public speaking skills, and the influence they can have when using it.

“My goal for the class is to empower students so that they can be confident in their ability to speak in public,” Bushnell said.

If students understand how to construct, support and deliver their messages and understand the potential influence these messages can have through rhetorical competence they are ‘good to go,’according to Bushnell.

Kristina Marquez, a computer science major, enjoyed improving her public speaking skills and having the safe space to practice her speeches.

“I was able to get more comfortable towards the end of the class, because I was able to connect with my peers better through listening to their speeches and reaching out to them before and after class,” Marquez said.

According to Marquez, the class made her reflect on her daily life interactions and realizing that people aren’t taking notes when she makes small errors.

Amanda Granrud is an instructor for the Public Speaking class. She enjoys pushing students to challenge themselves with every assignment.

“Everyone is here to learn and grow; that doesn’t happen if you just do the same things over and over again.  Comm. 111 provides a supportive environment in which to explore fresh and important topics, give new kinds of speeches, develop a more polished version of you, and get constructive feedback on your progress,” Granrud said.

“After completing the class, the vast majority of students feel more confident and more competent when it comes to speaking in academic and professional settings,” according to Granrud. “They’ve probably made some friends in the class and shared a few laughs along the way.”

Public Speaking is a three credit class that is offered all terms, and it includes a lecture and a recitation. The class takes a look at public speaking to build confidence in students and to develop their skills of communication.

Lifetime Fitness for Health is a class focused on providing up-to-date and relevant wellness and health information to the students of Oregon State University. It was also voted as one of the top three best baccalaureate classes to take at OSU.

Erica Woekel, director of the Lifetime Fitness for Health Program, has taught at OSU for five years and has made it her goal to change the culture around this class to make it more enjoyable and knowledgeable for the students.

One of her favorite parts about this class is the students. Woekel said she enjoys hearing about their stories and learning about them.

“I like when I use examples and they can relate, and they’re nodding and smirking, like oh God she knows,” Woekel said.

The class covers physical activity, fitness, nutrition and mental health with the hope to provide information to students to create better and healthier habits. Woekel said that one of the strengths of the class is the fact that it provides a human perspective.

Mental health has become a big part of this human perspective, and trying to show students that not everyone has it all together and that is okay, Woekel said.

The health class also works to examine why students don’t conduct healthy actions even though they understand its what is considered healthy. Woekel said that the class does this because it is important to work towards people actually doing rather than just knowing.

Not every school has a health requirement anymore, but OSU requires every student to take this course.

It’s important because it makes sure that health is on the forefront of students’ minds, especially since they are starting to take ownership of their habits, Woekel said.

Kathleen McCarty, a Ph.D. candidate for kinesiology, is also an instructor for this course.

“It’s been such a challenging and really rewarding experience,” McCarty said.

One of McCarty’s favorite things to teach the class, while they only spend one day covering it, is the social ecological model. This is a systems model that looks at behaviors, not just from an individual perspective.

Students come from all different places and backgrounds and making sure the class is inclusive to make students feel comfortable enough to engage in the class is important, McCarty said.

“We try to give lessons that can benefit anybody in the real world, so I think it really extends past the university, so I really enjoy talking about real-world experiences with students,” Ehrlicher said.

The Lifetime Fitness for Health class at OSU works to provide important information to students about health, fitness and nutrition, with the goal to better lives.

The class has one of the highest makeup of ethnic diversity of any class at OSU, and is taught by Jan Michael ‘Looking Wolf’ Reibach, a Native American flutist, and is a Kalapuya member of the Confederated Tribes of Grand Ronde.

He has been teaching this class since 2004, and the class has been offered 11 times throughout the years.

The goal of the class, according to Reibach, is to look at cultural diversity and practice to connect in to modern life and learn this through musical self expression.

“One of the most important things we do is, not only do we learn about cultural diversity of Indigenous people in North America, we collectively and individually compare the cultural practices of those people to our own modern life,” Reibach said.

According to Reibach, students learn songs, as well as create their own music. Musical self expression is important to allow students to connect to their feelings and their own voice, Reibach said.

“When they graduate this class they know seven songs, three scales and how to make their own music,” Reibach said.

The class works as a group environment, learning and sharing together, as to not single a person out.

The Native American flute is believed to be one of the oldest instruments created and is played by around 2 million people globally. Reibach said that it is easy to learn, and with the right technique, even contemporary songs can be played on the flute.

Daniel Bassich is a mechanical engineering student who took the class. He was surprised that the flutes have a total range of one whole octave and enjoyed the rich stories that Reibach shared when they would learn about each song.

“I learned that some of the most uplifting stories come from stories of grief,” Bassich said.

Native American flute takes a look at cultural diversity through the lens of Indigenous people and their culture to help students learn more about themselves and the world around them.

Kristen Travers, an OSU student majoring in mechanical engineering, expressed how she enjoyed how engaging and stress-free the class was for her. It was one of the highlights of her day.

“I learned a lot from the cultural stories that Jan Michael shared with us. His passion for the class is inspiring and definitely makes the class a must-take bacc. core,” Travers said.

Last spring term, OSU broke the record for the largest Native American Flute circle with a total of 624 confirmed participants.

Native American Flute by teaching the culture of indigenous people through a musical instrument in a group setting aims to foster cultural diversity at OSU.