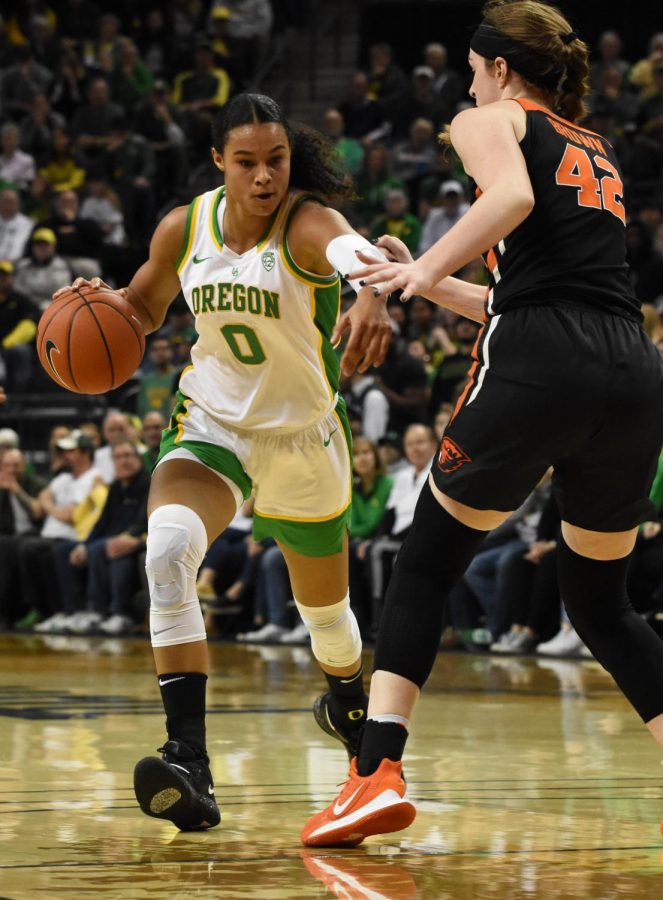 Even before the opening tip, Oregon’s Matthew Knight Arena had a different energy. It wasn’t simply that over 12,000 fans packed into the arena to watch a women’s basketball game, or that Oregon’s Sabrina Ionescu was continuing her dominance as one of the best players in the country.

This game was a culmination of what coaches Scott Rueck of Oregon State and Kelly Graves of Oregon have built in two of the best women’s basketball programs in the nation over the last decade. Bringing a sense of pride and identity to the state in these programs, both have fostered top notch athletes on and off the basketball court.

The #3 ranked Oregon Ducks were able to hold off the #7 Beavers after a fourth quarter 16-2 surge by Scott Ruecks team with a final score of 76-64 in the Ducks’ favor. Oregon continued their dominance in the PAC-12 conference after blowing out Stanford last weekend on the same court. The win helped the Ducks remain perfect at 11-0 this season at home before they head to Gill Coliseum where they haven’t won since 2010.

Thanks in large part to the monster trio of senior guard Sabrina Ionescu, senior forward Ruthy Hebard and junior forward Satou Sabally, the Ducks seemingly made every necessary shot.

“When we needed a basket, we got one,” Ionescu said.

While the Ducks were scorching early, leading 45-29 at one point in the game, the Beavers were searching for their rhythm all night that had led them to a 16-2 record before the game.

“I was pleased with the way we battled back. Showed a lot about this team. We need to respond better collectively though,” Rueck said. “We did a lot of things well, just not quite that well.”

Beaver senior guard Mikayla Pivec struggled from the field with only eight points, going 4-11 from the field. The team also shot poorly from long range, going 6-22 at 27%, against Oregon’s 42%.

A bright spot of the night for the Beavers was the guards abilities, especially redshirt junior Destiny Slocum’s. Slocum, who finished with 18 points and four assists, had the ability to penetrate the defense from the top of the key and forced Oregon defenders to collapse on her, leaving posts open for layups. Freshman forward Taylor Jones also scored a team high 21 points.

Overall, the Ducks’ fast paced offense and quick ball movement is what tormented the Beavers defense, forcing them to play to Oregon’s fast pace.

Even with the loss knocking the Beavers back in PAC-12 play to 4-3 and 16-3 overall, they fought back in the end.

Graves spoke on the unique environment and said the number of press would have been half the coverage six years ago compared to their Friday night matchup.

“The WNBA commissioner was here and I know for a fact that they wish they would sell out games like this. This, may not be duplicated anywhere else in the country,” Graves said.

“This is what everyone hopes to be apart of and in our sport it’s really hard to do. We’ve played in a lot of empty gyms through the years, and to see the fan base of both sides so engaged is so special,” Rueck said.

Despite the outcome of the game, these players understood the magnitude they are having on the course of the sport. Whether it is for the young fans out there or the experienced ones who have grown up never imagining they would see a day where the WNBA commissioner and the state governor watch two top 10 teams faced off against each other in an unmatched spot light in the same state.

The Civil War matchups continue in Gill Coliseum where the Ducks and the Beavers will face off for a 1 p.m. tipoff.