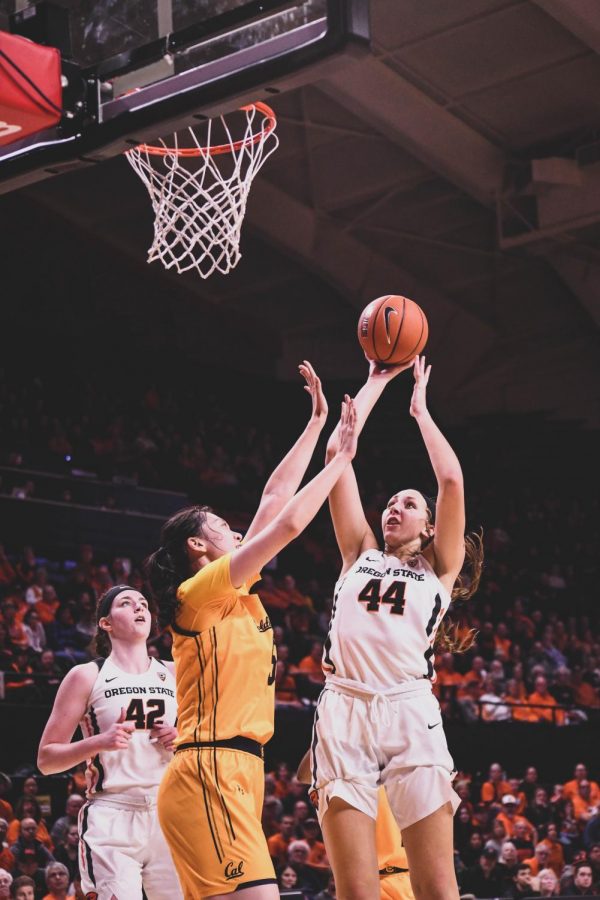 OSU Women’s Basketball freshman forward Taylor Jones (#44) springs high into the air to reach the basket to do a lay-up. Oregon State beat California 81-44 Friday night at Gill Coliseum and are now headed to take on Stanford.

Kids were screaming during opponent free throws, the student-band wailed the tune of “Hail to Old OSU” and fans danced whenever featured on the jumbotron. It was Friday night in Gill Coliseum on Jan. 17, where the Oregon State Beavers Women’s Basketball team defeated the California Golden Bears 81-44.

Tipping the game off with a starting five including senior guard Mikayla Pivec, junior guards Destiny Slocum and Aleah Goodman and freshman forwards Taylor Jones and Kennedy Brown, the Beaver offense got off to a slow start. Shooting 5-16 from the field, 1-5 from three and 6-9 from the free throw line, the score was tied at 17 each after the first quarter of play.

“The coaches told us just told us to come out and do our thing, and I think we did a good job of it,” Slocum said of the message from coaches after the first quarter. “We know how good of shooters are, we know what we prepare for in the gym every night. People get extra work in, and that’s what we do it for is for opportunities like this to bounce back and shoot the ball well.”

About halfway through the second quarter, OSU redshirt freshman guard Noelle Mannen checked into the game. For Mannen, it was just her 10th appearance of the season  and her first since Jan. 3 against Utah. She made an immediate impact, recording a basket and steal within the first minute of entering the game. Mannen would go on to play nine minutes in the game.

Also making her first appearance since the Jan. 3 matchup with Utah was sophomore forward Patricia Morris who had 13 points, three rebounds and two blocks in 14 minutes of action.

“It was so much fun, especially seeing the bench getting super excited when I would score,” Morris said. “What was really working was that screen, especially with the screen with Destiny (Slocum) and then the roll was pretty much open.”

After allowing 17 points in the first quarter, OSU’s defense ramped up the intensity and allowed five points the entire second quarter, with California shooting 2-17 from the field and 0-5 from three.

When the halftime buzzer sounded, Oregon State led by a score of 37-22. Though they held a 15-point lead, the offense struggles with shooting 12-31 from the field and 1-6 from behind the arc. The Golden Bears shot 8-32 from the field and 2-8 on three-point attempts.

“[California] shot 40% in the first quarter, then the second quarter they shot 11%. At halftime we talked about why, we talked about how our defense was at a different intensity level, we challenged shots more,” head coach Scott Rueck said. “We didn’t get lucky, we created that adversity.”

As the second half got rolling, so did the Beaver offense. Oregon State outscored their opposition 23-15 during the third quarter, led by Morris. She scored six of her total points in the quarter, making all three of her attempts.

Throughout the fourth quarter, it was more of the same from the Beavers. Their stout defense continued as they outscored California 21-7 in the quarter.

When the final horn sounded, Oregon State had extended its lead to 37 and secured their 16th win on the season, this time by a score of 81-44. With the victory, OSU had a 4-1 record in conference play before a matchup with third-ranked Stanford.

Moving forward, Rueck said there are several takeaways from this game.

“That’s the takeaway: this team has great leadership within it, responded correctly, came back with a great effort tonight and that’s just going to continue to build and get better as we go,” Rueck said. “It also sent a message to everybody to be ready, your number’s going to be called, and be ready to perform.”